I like Hitchcock in general, although there’s a lot of his filmography I haven’t seen yet. Still, in many ways he was a one-trick pony. He liked a particular type of story, and with a few exceptions, he made that same story over and over. Other directors of the era were far more versatile in what they produced, but Hitchcock produced Hitchcock films. I’m happy to call him a genius, but in general, you know what you’re going to get with Hitch. 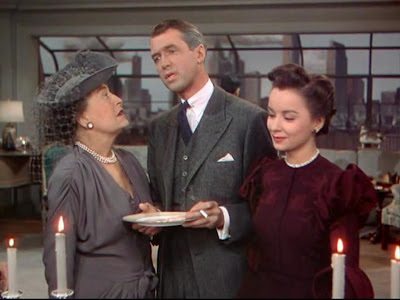 Rope is a film created more or less to explore camera trickery. The film unfolds like a one-act play (and was in fact based on a stage play). The plot is pure Hitchcock. Here’s the elevator pitch—two men kill a former classmate for intellectual thrills, then hide the body in a trunk and serve dinner off it to the friends and family of the victim. There, in fewer than 30 words, is the essence of Hitchcock’s high concept film, a simple story simply told.

Our killers are the effete Brandon (John Dall) and the equally effete Phillip (Farley Granger), a pair of former schoolmates who evidently live together. It’s been suggested over and over that Brandon and Phillip are a couple, and while there is a certain level of homosexual subtext, it’s certainly not played up at all. If they are or are not, it doesn’t affect the plot in any respect. As the film begins, they are strangling David Kentley (Dick Hogan), another former classmate.

What happens next is described in that high concept sentence above—they hide the body in a trunk, then move their dinner service into the living room. This entire event was planned through and through—Phillip has a piano performance soon, and they had a planned meeting with their victim’s father (Cedric Hardwicke), so they turn the evening into a party. The trunk, which has a broken lock, is placed under a tablecloth and plates and food, so the party guests will be literally getting their food off the coffin of the murdered victim. For Brandon, this is all wonderfully exciting, but Phillip immediately has regrets.

And then the guests arrive. The housekeeper, Mrs. Wilson (Edith Evanson), brings in the food and busies herself. We then meet Kenneth (Douglas Dick), another former classmate. Following him is Janet (Joan Chandler), the murder victim’s fiancée and the former romantic partner of Kenneth. Next come the victim’s father and his sister (Constance Collier). The final guest of the evening is the killers’ former teacher, Rupert Cadell (James Stewart).

And here’s where things start to get interesting. Cadell, we learn, is very much a fan of the philosophy of Nietzsche, particularly the idea of the superman. At school, he preached the idea as an intellectual puzzle to his students—do superior men have not only the ability but the right to commit murder based strictly on their status as superior men? This, we learn, is the motive for the act at the beginning of the film. Phillip and especially Brandon hold themselves as superior, thus the murder of David Kentley is justified. As the evening wears on, Brandon drops more and more hints to his actions and Phillip becomes more and more nervous. Most critically, Rupert becomes more and more suspicious of David’s absence from the party and precisely what might have happened before the party started.

Rope is filmed in real time—the film runs a sparse 80 minutes, and the actions of the film encompass that same amount of time. From the opening murder to the final resolution, there are no seams, no jump cuts, no flash forwards or flash backs. More impressively, the film is made in eight or nine total takes, each running roughly 7-10 minutes (the maximum time for filming in cameras of the day). Many cuts are masked by moving the camera into something black and out again, so the only real evident cuts are those that come when the projectors of the day switched reels.

As an experiment, Rope is an unqualified success. It watches almost exactly like a one-act play, seamlessly moving from event to event. I can only imagine the amount of dedication and skill necessary to pull off these long takes without a hitch from as many as eight actors at a time in front of a single camera. The film is all about timing. Deciding to simply put the rope—the murder weapon—back in a kitchen drawer, Brandon walks through the swinging door. As the door swings back, we see evidence of this timing. Just as the door has swung back open, we see him drop the rope into the drawer and close it.

As a filmed narrative, Rope is perhaps too simple. It is the length it is because it simply could not be any longer. Hitchcock manages a few good moments of tension—as Mrs. Wilson goes to put something back into the trunk that holds the body, for instance, there are lingering shots over the trunk. We know what will happen if the trunk is opened, and keeping it shut is necessary for the story to keep playing out.

Simplicity isn’t a terrible thing, though. Rope manages to remain taut and terrifying on an intellectual level. The idea of killing for its own sake, killing for the intellectual challenge of creating the perfect crime, is a scary one. Still, the plot here is very much secondary to the camera experiment at the heart of the film. Rope is very much worth seeing and studying, but mostly on the level of seeing how Hitchcock did what he did and not for the intricacies of the story it tells.

Why to watch Rope: Hitchcock pared down to the bare essentials.
Why not to watch: It’s all based on a camera gimmick.