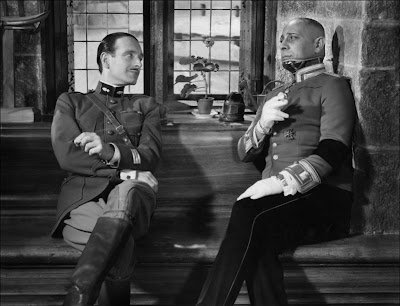 I’ve had a belief for a long time that many of the great World War II films, at least those up to the modern era, are prisoner of war films. Stalag 17, The Great Escape, The Dirty Dozen, The Bridge on the River Kwai, all take place all or in part in a prison, and I’m certain I’m forgetting a number of them. War films from the 1940s are tenerally propaganda, of course, and those of the 1950s and 1960s are frequently nationalistic, no doubt as a sort of pro-democracy reaction to the Cold War. Having seen La Grande Illusion (Grand Illusion) today, it occurs to me that all of those films owe this one a huge debt.

La Grande Illusion was filmed in the years running up to World War II but before the start of the war. It focuses (naturally) on the first war, but certainly has something to say about the rise of anti-Semitism and the Nazis. However, this is still a film primarily concerned with aspects of war and social class, exploring many of the same themes as Powell and Pressburger’s The Life and Death of Colonel Blimp. I said yesterday in discussing The Thin Red Line that for many, World War II was our last noble war, a war that we fought on the side of right for reasons of moral good. La Grande Illusion suggests in many ways that World War I was the last war to be fought with a sense of honor and dignity among combatants, or at least the last war in which the rules of social class crossed and in many ways superseded national boundaries.

As the film begins, the aristocratic Captain Boeldieu (Pierre Fresnay) and the lower-class Lieutenant Marechal (Jean Gabin) fly off to investigate a troubling spot on a reconnaissance picture. They are immediately shot down by the aristocratic von Rauffenstein (Erich von Stroheim, complete with his monocle), who sends someone off to find if the men he shot down are officers, and if they are, to bring them to lunch. As it turns out, he and Bouldieu have a connection of a sort, and at the very least respect each other on the level of similar backgrounds.

The two are placed in a prisoner of war camp, where they actually live pretty well thanks to parcels from home and the largesse of non-aristocratic but wealthy fellow prisoner Rosenthal (Marcel Dalio). The prisoners naturally talk about escape and are constructing a tunnel (using a method of dispersing the dirt that is perfected in later film The Great Escape. They also receive a trunk of women’s clothing to be used for putting on stage productions. In the middle of one such show, they learn that Four Douaumont has been retaken, and break out into a spontaneous rendition of La Marseillaise. This leads to Marechal spending some time in solitary, and he gets out just in time for the tunnel. However, they are all transferred to a different prison, and are unable to tell the incoming British prisoners that the tunnel is already complete.

As it turns out, they are transferred to a castle run by von Rauffenstein, who has been terribly injured and thus runs a prison to continue to be useful for the German Empire. While he claims the prison cannot be escaped from, Boeldieu, Marechal, and Rosenthal come up with a plan, but it requires one of them to make a supreme sacrifice for the others. Two escape and eventually hole up in a German farmhouse, and discover that for the people who are not in the war, the war still creates a terrible impact.

Orson Welles once said that if only one film could be saved, he’s save La Grande Illusion. That may or may not be hyperbole, but I certainly understand the sentiment. This is a film that, despite its age and its concentration on a war that most Americans (including myself) know little of still resonates as one of the great war films ever created. There is a vast sense of loss in this film, not of the sort of loss typically thought of with war, but with the loss of an era, the loss of a sort of nobility in war, at least among the officers and nobility. There is a sense in the film that there is still something ennobling about war, but it is a sense that is dying off. At several places, it is lamented by von Rauffenstein that the sort of equality now so common has changed the way warfare is conducted—that there is something a little dirty about men like Marechal and Rosenthal being officers.

La Grande Illusion is a film filled with beautiful moments of the sort that only show up in films about war. Several exchanges between von Rauffenstien and Boeldieu reflect this, as does the ultimate fate of von Rauffenstein’s prized geranium, a sacrifice made for no purpose other than nobility and honor. My favorite part of the film, however, concerns the rather sweet and slow budding love affair between Marechal and Elsa (Dita Parlo). Elsa confesses her loneliness, living with just her young daughter. Her husband and three brothers have all been killed in different battles in the war, ironically in Germany’s greatest military victories of the age. The romance here—the two share only a limited number of words with each other—is sweet and tender, and comes in no small part because both are grasping for anything to hold on to in a world torn apart.

Additionally, I couldn’t help but spare a few thoughts for Rosenthal. Twenty-five years after the conclusion of this war, a wealthy Jew living in France had some real worries. Since the film was made before Germany’s invasion of France, Renoir had no way to know that our thoughts might go there, but he certainly created the character as a Jew for a reason.

So, despite the fact that La Grande Illusion is dated in many ways, it is a film that remains vital and powerful. Many, many people have told me how good this film is, and they were all right.

Why to watch La Grande Illusion: The first great prisoner of war movie, and likely the best.
Why not to watch: It shows a view of war that no longer exists.