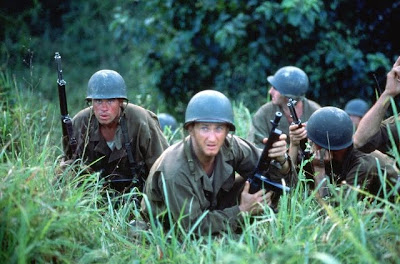 There’s a problem with coming to certain films late. The problem is that it seems that everything that can be said about them has already been said. This is especially true with more modern classics. Seeing the films that everyone else has seen and loved years after everyone else puts a reviewer or critic in the unenviable position of trying to find something new to say when there doesn’t seem to be that much new to say. So it is with The Thin Red Line, the film that marked Terrence Malick’s return to filmmaking after a 20-year break. Malick is one of those unique directors who is beloved by critics and whose films still generate a lot of non-critical buzz. It seems like everyone has seen The Thin Red Line but me. Well, not any more.

I’m also reminded of something I said some time ago about Jim Jarmusch, who sort of has the same reputation, although gets less rank-and-file viewership. It’s got to be nice to have the kind of pull as a director to be able to get good people for tiny roles. The Thin Red Line has cameo spots from some big names—John Travolta, John Cusack, and George Clooney, for instance, are all in this film for a cup of coffee before we switch off of them. John C. Reilly pops up throughout the film, but doesn’t speak much. Woody Harrelson has a slightly larger role, but doesn’t make it past the first hour of the film. That sort of cache has to be useful.

This is generally about the place when I start a summary of the film in question, but I’m not going to do that here. This film rambles in a variety of directions, following the stories and the internal monologues of multiple characters throughout the course of the film. We get not just the outward actions of many of the characters, but real glimpses into them, including parts of their life beyond soldiering that add nothing to the plot, but a great deal to the reality of the film and the believability of the men fighting. It would simply take too many words to give the meandering story the sort of weight it needs. It’s better to move on and talk about the film itself rather than try to summarize something that would end up taking thousands of words.

What strikes me the most after seeing this film, though, aside from the fact that I understand now why it’s my brother Tom’s favorite film, is that this is a World War II film that for all the world feels like a Vietnam film. That’s not particularly a compliment or an insult, but a straight observation. Up until recently, American World War II movies tended to be, well, a bit jingoistic, filled with either outright “America! Fuck yeah!” or with a sort of neutral “we’re the good guys” attitude. Even a film like Saving Private Ryan, as brutal as that film is, ends with that same sort of message of benign patriotism. Vietnam films, on the other hand, have seemed to run darker, questioning the war, the military, and even society.

This, I think, is traceable to our part in the two wars. World War II, in many ways, feels like the last of our noble wars, the last war we fought because it had to be fought. We grew up as a nation in that war, but when the war went on, we were united as a nation to seeing it through. Subsequent wars have, for lack of a better way to put it, felt tainted. There’s a sense that either we don’t belong there or that what we claim to be fighting for and what we’re actually fighting for are very different. There’s a real sense of that in this film, a sense that the war is not merely ugly, but that decisions are made with men’s lives for reasons that are not the best or the purest, and that acting for the benefit of the troops will not lead to success or even praise, but shame. There’s a tremendous moment just after Captain Staros (Elias Koteas) is relieved of his command and leaves the war zone when we get the voiceover of one of the men who says in effect that war doesn’t ennoble anyone, but turns men into dogs. That’s not a sentiment we’re used to from the generation that beat Hitler.

It also feels like a Vietnam film because of the setting. For whatever reason, many of our most popular, famous, and successful World War II films have taken place in Europe. It may well be that 1940s-era Germany makes such a universal enemy that it seems natural to make them the foils for a picture set in this era. It’s easy to hate them, and while the Japanese were just as militaristic and just as cruel, we’re not as versed in the Pacific side of the war. The Thin Red Line takes place on Guadalcanal. It’s tropical, even a jungle in places, and thus feels out of place in what we’ve become used to from World War II films.

Needless to say, the film is gorgeous, a common trait for Malick’s films. Additionally, the battle scenes are incredibly intense. We get tremendous attack sequences, battles in fog, and terrible confusion throughout. The battles feel real, but unlike the opening sequence in Saving Private Ryan, there is no shaky-cam work. It’s not disjointed or jarring, but smooth, and thus terrifying in a different way. These are scenes of carnage and terror shot beautifully, which makes them emotionally awful in a way Spielberg’s film is not.

If there is a problem here, it’s that the film feels loose in some way. We get the internal monologues of many of the characters, but not really enough of any one of them for a clear picture. We get snatches of them—Jim Caviziel’s Private Witt who has gone AWOL many times before and wants only to live with the Melanesians in the area; Sean Penn’s Sergeant Welch, who just wants to survive intact; Nick Nolte’s Colonel Tall, passed over for promotion and wanting nothing more than victory in battle. We get a lot from Train (John Dee Smith) who is sort of a foxhole philosopher, too. But in many cases, it’s difficult to distinguish one voice from another. This may be intentional—one narrative becomes all of the narratives, in effect. But it still creates a great deal of confusion, or at least did for me.

Regardless of that, this is a tremendous film. War is an ugly thing, and Malick managed to make something of stark beauty from it. I get why this is my brother’s favorite film. In fact, knowing him, I’d be a little shocked if it weren’t.

Why to watch The Thin Red Line: It might be the greatest war film ever made.
Why not to watch: It feels disjointed.