Film: Xi Meng Ren Sheng (Hsimeng Jensheng; The Puppetmaster; In the Hands of a Puppetmaster)
Format: Internet video on laptop. 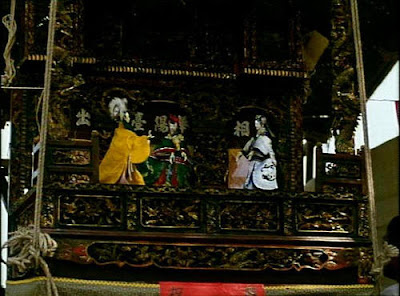 Biopics are a strange bird, lingering in that odd place between documentary and fiction. In the case of Xi Meng Ren Sheng, the subject of the film takes a part in the proceedings as a narrator. This is another of those films in which converting from one language to another is problematic. The Book lists this as Hsimeng Jensheng and gives the English title as The Puppetmaster, but I’ve also seen it as In the Hands of a Puppetmaster. In other words, there’s no real consensus of what this film should be called, let alone how it should be classified.

This is the story of Li Tienlu, a man born in Taiwan near the beginning of the last century. Over the course of the film, we see him grow up and become one of the most celebrated artists in puppetry in the country. This might not sound like a big deal, but at this time in Taiwan, puppet theater was an important form of expression, evidently close to being on par with traditional opera. Certainly at the very least there are puppet theater troupes that travel the country and prove to be very popular.

Frequently throughout the story Li Tienlu himself appears—an old man at the time of the filming—and discusses some aspect of his youth or his upbringing. Most of the time, though, we witness these critical events in his life as in a traditional film. It reminds me in some ways of a film like American Splendor. I know intellectually that this one came first, but I saw American Splendor first and it’s difficult to reverse that knowledge in my own head.

A great deal of the film concerns itself with Li Tienlu’s childhood and youth and the incredibly bizarre family situation. He moves from place to place, is saddled with an almost stereotypical evil step-mother, and is frequently subjected to being sent off so his caretakers can make money on his work. We are also given several performances both of traditional Chinese theater and the sort of puppet theater in which Li Tienlu became so influential.

The real crux of the film doesn’t show up until Li Tienlu has made a break from his family and has gone off on his own with a new theater troupe. We learn early in the film that for a number of years, Taiwan fell under the jurisdiction of Japan, which is interesting in the moment, but doesn’t seem to be of much importance. It becomes important later when we realize that this film takes place in the years before and during World War II, making Taiwan a part of the Japanese war effort. These two events are virtually synchronous—Li Tienlu tells us in narration that after he started his own troupe, Japan invaded China. The Japanese government banned outdoor theater performances, forcing Tienlu to temporarily join a more traditional theater group. Even here, though, the transition to this more serious topic isn’t immediate. We learn about the war, and Li Tienlu isn’t approached for some time afterwards.

All of this becomes more serious when it becomes evident that the Japanese military government wants Li Tienlu to ply his trade for them, essentially performing in propaganda pieces to assist in the morale of the home front and thus the war effort. For me, this is when the story really became interesting. The live of the artist as a young man is interesting only in the sense that it informs the artist as an adult. The conflict here not whether Li Tienlu will sell his skills in this way, but whether or not he will ever rebel against it, and whether or not there will be any fallout from others.

As happens with many of the films I have been watching lately, the director is someone who greatly trusts his camera’s ability to tell the story and doesn’t feel the need to over edit. It allows the actors to truly evolve the characters rather than relying on cuts and jumps for the story to unfold. Frequently, we’re given long takes in which the camera barely moves, allowing the story to evolve in front of us rather than having it forced upon us. The end result is that the story feels much more natural and much more real, since we frequently see entire scenes from the perspective of a participant rather than as someone in the editing room. This is particularly true of many of the staged performances, which are filmed with a static camera from a position in the audience.

This isn’t always a positive, though. There are frequently moments in which it feels like an edit could be made with little or no loss. The version of the film I watched leaves large pieces of dialogue untranslated. This makes it difficult for a non-Mandarin speaker like me to know if what I’m seeing is merely a slice of life or a critical point that I am left in the dark on.

Overall, though, this is a film I am pleased to have seen. It’s not one I feel the need to see again in the near future, but it is beautifully filmed. Ultimately, the film is merely the story of this man’s life. No real questions are answered, but then how many of us really get any answers in our own lives?

Why to watch Xi Meng Ren Sheng: A unique story beautifully told.
Why not to watch: It’s very slow starting, and while the editing is minimal (a plus), it also sometimes drags because of it.

Email ThisBlogThis!Share to TwitterShare to FacebookShare to Pinterest
Labels: biopic, Hou Hsiao-hsien, Hsimeng Jensheng, In the Hands of a Puppetmaster, The Puppetmaster, Xi Meng Ren Sheng