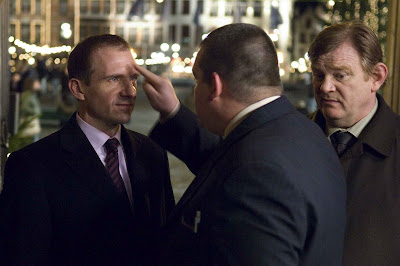 This brings us to In Bruges, a film I wanted to see during its theatrical release and like 99% of all films, missed. I finally got around to watching it, and I’m suitably impressed with it. It’s hard to call it a take on a particular genre. It’s not really an action film despite a couple of action sequences and a decent body count. It’s not truly a film noir, although it certainly references noir in some aspects. It’s not a buddy film despite being about a pair of buddies. It’s also not really a comedy even though there are plenty of really funny moments in it.

Our heroes, Ken (Brendan Gleeson) and Ray (Colin Farrell) are hit men in the employ of Harry (Ralph Fiennes). After completing a job, they are sent to Bruges to lay low and wait for a new assignment. Ken is immediately taken with the city, with its canals and old buildings. Ray, not much for old world culture, is immediately bored. Ray is touchy and twitchy, picks fights almost without trying, and spends a lot of his time in a snit at being sent to a place that is a virtual backwater for him. He’s uninterested in sightseeing or doing anything that tourists do. It doesn’t help that he is forced to share a room with Ken.

Things liven up when he notices a film being made while he and Ken are walking at night. He investigates mainly because of the presence of Jimmy (Jordan Prentice), who prefers to be called a dwarf and not a midget. It is here that he meets Chloe (Clemence Poesy), someone he assumes is a part of the film crew, and he arranges a date with her.

As it turns out, this works to Harry’s advantage. He sent Ken and Ray to Bruges with a specific purpose in mind. It turns out that the last job was Ray’s first, the killing of a priest. During the hit, Ray inadvertently killed a young boy. For Harry, a family man, this is the one unforgivable sin. He sent the pair to Bruges both to get them out of the country and to send Ray somewhere special for a few days before Ken has to kill him. For Harry, Bruges is a magical place that no one could ever possibly dislike. Ken, who brought Ray into the business, doesn’t want to kill his friend, but knows that if he doesn’t Harry will come after him.

Meanwhile, Ray discovers some things about Chloe. First, she’s not part of the film crew, but supplies many of the actors and crew with drugs. Second, she and her former boyfriend Eirik (Jeremie Renier) often seduce tourists and rob them. This results in a strange scene in which Ray disarms Eirik, discovers that his pistol is loaded with blanks, and fires one into Eirik’s eye, blinding him. At the same time, he is greatly upset, figuring that Chloe’s interest in him was nothing more than a scam, and that this only proves that he is unworthy of any love or attention.

All of this sets up the crux of the film. Ray wants to kill himself and Ken is supposed to kill him. Naturally, this means that Ken stops Ray from killing himself and sends him off on a train out of Bruges, leaving him to deal with the consequences of Harry’s anger. Natural events, though, bring Ray back to Bruges at the same moment that Harry arrives to deal with Ken, and all manner of violence ensues.

In Bruges is one of the most foul-mouthed films I have ever seen. There are more f-bombs per square inch in this film than I have ever beheld in my natural born days. Everyone in the film uses it as every possible part of speech (except perhaps adverbs and prepositions) and as punctuation. It’s a bit jarring at first, but soon settles down into a sort of rhythm, an environment of foul language.

It’s worth noting that I’m not a huge Colin Farrell fan, although he’s good here. He’s the sort of actor that makes me wonder how he gets roles sometimes, but here he actually acts, and pulls it off well. There’s a vulnerable side to Ray that seems out of tune with Colin Farrell, and yet I managed to believe him in the role and even accepted his mood swings without question. Gleeson, though, is the star of the film for me, putting in another trademarked entertaining performance. For my money, he’s one of the best character actors going.

In Bruges is a worthwhile watch if you don’t have a problem with excessive language and a few moments of mildly disturbing violence. Really, it’s the language that’s extreme more than anything else. If you can live with swimming in a sea of profanity, you’ll find a lot here worth seeing.

Why to watch In Bruges: Because it’s really damn good.
Why not to watch: If you’re not a Colin Farrell fan, there’s an awful lot of him here.