I’m going to come out of an intellectual closet here. I don’t have a problem with David Lynch. I don’t specifically seek him out and I haven’t seen anything close to his entire filmography, but I’ll happily sit down with one of his films, and I don’t need to be in a particular mood to do so. I even like Dune for all its campy weirdness. Right now, you’re having one of three reactions. You’re nodding in agreement, shrugging, or concluding that this is more evidence that I’m hellbound. 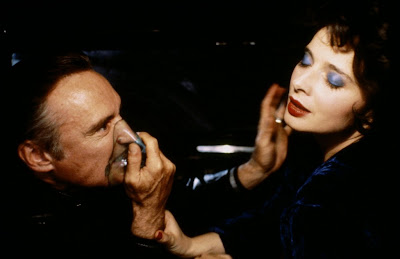 But, for the most part, even people who don’t like Lynch’s films have a modicum of appreciation for Blue Velvet. I like this film, but I’m not sure why it’s so celebrated in his filmography above, say, The Elephant Man. It might be the sex, or the flat-out weirdness that is still comprehensible, or the performance of Dennis Hopper. Or all three. Or something else. I really don't know.

The thing about Lynch is that most of his films are quite obviously his films. Lynch attacks a particular genre—film noir in this case—from a specific point of view. The end result is what that genre would look like if everyone in the world were completely crazy. Eraserhead is what horror films would look like if everyone was completely bat-guano-sandwich-eating crazy. Blue Velvet is how we’d think of film noir if we all belonged in one of those rooms with the nice, soft walls.

Jeffrey Beaumont (Kyle MacLachlan) returns to his small town home of Lumberton from college because his father has suffered a near fatal stroke. Walking home from the hospital, Jeffrey discovers a human ear in a vacant lot. Realizing that this is probably not a good thing, he takes it to Police Detective John Williams (George Dickerson). Jeffrey, naturally enough, is curious about this, and goes to Williams’s house to inquire about the ear. It’s here that he meets Sandy Williams (Laura Dern), who tells him that she’s overheard her father talking about a woman named Dorothy Vallens (Isabella Rossellini) who is a torch singer at a local club called the Slow Club.

Jeffrey decides to investigate, and using the pretext of being an exterminator, he enters her apartment. He returns later to check the place out, but is surprised when Dorothy returns home and discovers him. Things become sexual very quickly and suddenly, when the film takes a very hard left turn. Jeffrey hides in the closet because of a new arrival: Frank Booth (Dennis Hopper in one of his most memorable performances). Frank has a strange power over Dorothy, a penchant for profanity, an addiction to inhalants, and a sexual attraction to blue velvet. Jeffrey watches one of the most disturbing sex acts filmed in the 80s, but even this doesn’t deter him from investigating further.

To keep this short, Jeffrey discovers that Frank has kidnapped Dorothy’s husband and son, and is keeping them alive to continue to get sadistic sexual pleasure from her. Further, Frank is involved in drug trafficking and is assisted by one of the higher ranking police officers in the area (Fred Pickler). The more Jeffrey and Sandy investigate what is going on, the deeper this well of depravity takes them.

So, Blue Velvet is film noir as it exists in David Lynch’s head, and Lynch’s head appears to be a very messed up tract of real estate. The film is profane, ugly, disturbing, and unerotically sexual. It is some of the ugliest sexual activity ever portrayed on film, and that has to be Lynch’s intent here. It’s supposed to be perverse and repellent, and it is.

There are some standout reasons to watch this film, though. First and foremost is the performance of Dennis Hopper. This film was made at a low point in Hopper’s career, and Blue Velvet put him right back into the mainstream. Frank Booth, in part because of the script and in large part because of the mania infused in him by Hopper’s performance, is one of the most terrifying screen creations in history. This is a man not simply without morals but without any sense of right and wrong. He is drug addled, violent, and brutal, shifting moods without warning or for any noticeable reason. He is a pure sociopath, an embodiment of distilled, pure evil. Hopper’s scenery chewing is excessive, but also spot-on for the needs of the film. It is an electrifying thing to see.

Also worthy of note is the short performance here from Dean Stockwell as Frank’s friend Ben. Stockwell plays this odd role with a mixture of camp and sophistication, dressing like a dandy and performing lip-synch versions of Roy Orbison songs for an uninterested audience of nursing home residents. It’s a cameo that looms a lot larger than the one scene. Stockwell, in his own way, is almost as disturbing as Hopper’s Frank.

I really don’t have a lot to say about anyone else in the film. Isabella Rossellini is serviceable if not terribly compelling. Both Kyle MacLachlan and Laura Dern are wooden in that way that many people in Lynch films are. They could be easily replaced by virtually any other vaguely attractive actors of the time and of the appropriate age. Really, this film is almost entirely about Hopper from my perspective.

For what it’s worth, I won’t apologize for respecting the hell out of this film or even for liking it. Lynch is a weird bastard and many of his films defy description or even narrative summaries. Those who don’t like his work will continue to dislike his work. Blue Velvet will remain a film that should be experienced simply for what it is.

Why to watch Blue Velvet: It’s hard to call yourself a film person without seeing it.
Why not to watch: Few other films can make sex this entirely unappealing.