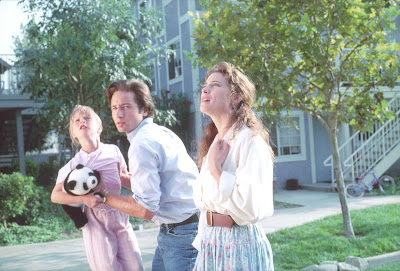 Religion in film is an interesting thing to me. As an agnostic, I don’t have much of a warm fuzzy for religion in general, in no small part because my experience leads me to believe that it is filled with half-truths, whole cloth, and hypocrisy. But that’s neither here nor there when it comes to film. Film frequently treats religion as a pure thing—as something beyond real life. I think in particular of the near-religious experience I had watching The Passion of Joan of Arc and a part of that experience came from the fact that the film was completely divorced from the world. In the real world, religion is never pure; in film it can be. At the same time, religion is often dealt with harshly in film. Anyway, it was with some nervousness that I approached the 1991 film The Rapture.

I’m only going to talk about a part of this film, because it works with a fascinating twist near the end, one that is shocking if (for a heathen like myself) difficult to take. It’s not the type of twist that destroys the film, though—it works well in context, and I’m always willing to suspend my disbelief until I’m shown that it’s not worth my time.

Anyway, we have Sharon (Mimi Rogers) who is something of a sex addict. Perhaps not—it’s probably fairer to say that she is an enthusiastic participant in the lifestyle of partner swapping and group sex. With her sort-of lover Vic (Patrick Bauchau, a relative unknown with one of the greatest voices working), she goes to spots around town looking for bored couples who want to spice up their sex lives. It’s in this way we meet Randy (David Duchovny). Sharon and Randy become frequent sex partners. Meanwhile, at work, Sharon overhears several coworkers discussing some things that she doesn’t understand. They talk about “the boy,” something called “the Pearl,” and they talk frequently about praying.

Sharon tries to fake her way into discovering what the group is talking about, but she can’t. she’s curious, though, and wants to know more. The meaningless sex is starting to wear on her as well; essentially, she’s burning out from the lifestyle and wants to change. And so she does. She picks up a random hitchhiker (James LeGros) and it looks like more of the same, but she essentially robs him, stealing his gun and kicks him out and comes very close to suicide. She spends the next couple of days alone praying and has a spiritual vision of the Pearl, and starts her life anew. She also meets the boy, who speaks of prophesy and the eschatology, predicting Judgment Day within six years. Sharon reforms the life of Randy, and the two are married, having a daughter named Mary (Kimberly Cullum). And they are told that the Rapture is coming soon, by the end of the year.

And then all hell breaks loose. Randy fires a man at work who then shows back up with a shotgun and starts blasting, killing Randy. This sets off a chain of events that leads to Sharon’s conviction that the Rapture is coming and coming soon, and that God wants her to go to the desert for some kind of sign or for the Rapture itself. More than this I will not say, but there’s a good portion of film left. And just when you think you have a handle on everything, it all changes again, leading to a surprising conclusion. To put this another way, with 20 minutes left, I thought this was a film that belonged on Lifetime. With 13 minutes left, I was no longer sure. With 12 minutes left, well, I no longer knew what to think.

This is a surprisingly powerful film in many ways, but it loses me at the end. That twist ending that should have really tied the film together instead becomes something that becomes silly, for a few moments looking like nothing so much as a film created specifically for a fundamentalist audience. And it’s not the twist itself, which I thought was fascinating at least in theory, but how it plays out once that sudden change has been revealed. It goes from being a film with decent production values to being shot on an obvious stage and looking for all the world like a local theater production during which the fog machine broke and went on overdrive.

The journey of the film is far more interesting than the resolution. It seems, right up to that twist, that the film is going to have a comment on the idea of faith and blind belief as well as on precisely what people will allow themselves to believe when pressed to the edges of the world and their lives. And the film probably still does have this to say, all things being equal. But then, by becoming an apologist for Christianity on one hand and an advocate against it on the other, director (and author ) Michael Tolkin tries to have it both ways. It might have been far more powerful if he’d taken a stand one way or the other.

The more I sit and think about it, the more I think this film should have ended with about eight minutes cut out of the end. There’s a scene in which Sharon talks to a cop named Foster (Will Patton). There is a remarkable exchange of what might have happened to her spiritually had she driven her car off a bridge. Had the movie ended here, I think I would have liked it better, because it would have offered a more interesting place to begin discussion. Instead, we get dogma and a fairly dull resolution. This is a film and a topic that should end with questions, not proselytizing.

Why to watch The Rapture: It’s a thought-provoking twist toward the end, and it gets there honestly.
Why not to watch: The twist immediately fails to pay off.