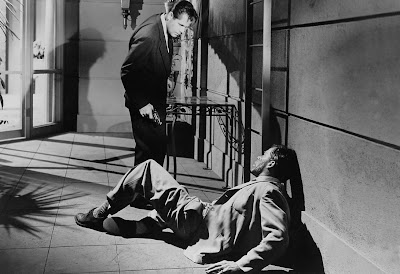 I’ve been on a little roll lately. After several days of seeing films that left me feeling flat, I’ve really enjoyed the last couple of films I’ve reviewed. At the risk of tipping my hand in the first paragraph here, well, the streak is continuing tonight. The Big Heat was far better than I predicted it would be. I went into this with no expectations other than it being film noir. In fact, I’ll admit that I wasn’t sold on Glenn Ford as a noir hero. Well, I was wrong. This film is all that and a bag of chips.

We start with the suicide of a cop named Duncan. Duncan’s wife Bertha (Jeanette Nolan) finds the body and doesn’t seem too terribly upset. She also finds an envelope addressed to the authorities and opens it. We’re not privy to the contents right away, but there’s no doubt that the information contained within is some sort of bombshell. Police Sergeant Dave Bannion (Glenn Ford) is sent to determine the cause of Duncan’s death and rules it a suicide almost immediately. However, he’s soon contacted by Lucy Chapman (Dorothy Green), who claims to have been Duncan’s girl on the side. According to her, there’s no way that Duncan would have killed himself. Things take a real turn for the sinister when Lucy turns up dead and showing evidence of having been tortured.

This puts Bannion on the case despite being warned off it by his boss, Lieutenant Wilks (Willis Bouchey). Bannion twigs pretty quickly that the man behind the murders is Mike Lagana (Alexander Scourby), the head of the local crime syndicate. In fact, Lagana is more than just a crime boss. He essentially runs the entire (unnamed) city. It’s evident early on that Wilks is getting pressured to keep Bannion off the case, indicating that Lagana’s hooks go high up into the ranks of the police. It’s something confirmed later. Early in the film, we see Lagana’s right hand, Vince Stone (Lee Marvin) playing poker with a group of unidentified men. Later, at a similar scene, we start to recognize them—one is Higgins, the police commissioner (Howard Wendell).

And then The Big Heat takes a very dark turn and stays dark for the bulk of the film. We have a few early scenes between Dave Bannion and his wife, Katie (Jocelyn Brando). Once Dave has been warned off the case a few times, we return to the cute domestic scene where the couple interacts with their young daughter Joyce (Linda Bennett). The two plan an evening out and Katie goes to get the babysitter. And then the car blows up. Out of nowhere, Katie is killed by a couple of sticks of dynamite meant for Dave. What started as a straight cops-and-robbers drama with hints of one man against the crooked system immediately becomes a dark and twisted tale of revenge.

This is not the only dark moment in the film, though. We learn of Vince Stone’s temper at one point, as we see him sitting in a bar playing dice. The woman rolling the dice has the bad habit of picking them up too quickly, causing Vince to burn her hand with a cigarette. Dave steps in to protect the woman, kicking Vince out of the bar. Vince leaves, forgetting his girlfriend, Debby Marsh (Gloria Grahame). Debby makes an immediate play for Dave, following him to his hotel room. Naturally, Vince finds out about this and, rather than waiting for an explanation (and really, there’s every indication that Debby isn’t bright enough to come up with a good one anyway), he tosses a pot of boiling coffee on her face. Dark stuff, indeed. It’s similarly dark when Dave confronts Vince’s main assassin, Larry Gordon (Adam Williams). A few punches in, Dave is close to killing the man but lets him live, giving him a death sentence of a different kind: he tells him that he’ll let everyone from Lagana on down know that he squealed.

The Big Heat shares all of the surface trappings of a great noir—elements of crime, murder, black deeds, dangerous women, and foiled plots. It also has one of the better scripts in the genre. Any good noir tosses out great lines with effect, and this film is no different. Debby, for instance, horribly scarred and sitting in a hotel room afraid of being seen in the light comments that sitting in the dark thinking is difficult when one has spent a lifetime not thinking. It’s incisive and intelligent, scary, probing, and shocking all at once.

There are a few problems, most of them coming right at the end. We get the big reveal of Debby’s scarred face, for instance, and the makeup job is, well, pretty pedestrian. It’s very obviously not real and looks like what it is—a plastic or rubber appliance glued to the left side of her face. Similarly, the final showdown between Dave and Vince is less convincing than it should be. It naturally comes down to fists, but only after they’ve emptied their guns to no effect from a distance of around 10 feet.

But these are little things, ones easy to overlook in the heat of the tremendous story and excellent twists. It helps that everything else is so good, up to Debby getting her full revenge on everyone. The Big Heat is justifiably thought of as one of the great films noir of the classic period. It manages to be more than a simple entertaining crime film. It’s a look at a dark reality where criminals play for keeps with everyone, not just with the other criminals. No act is too awful for these men, and no road too dark to travel down. Bannion himself slides easily into this dark territory, contemplating murder more than once as the film goes on. This more than anything is the film’s greatest triumph. While the villains are as evil as they come, even the heroes are tarnished and morally grey.

Why to watch The Big Heat: Because it’s far better than you might think based on the outline of the story.
Why not to watch: It’s really dark, even for film noir.