It’s not too difficult to suggest that one of the main problems with the religious lives of most Americans is that it happens on Sunday for an hour or two and is then pretty much ignored. One of the attractions to more Eastern religions is that such belief systems tend to be all-encompassing; they pervade all aspects of life. Religion becomes less something like a job, but something that is eternally present. I’m oversimplifying, of course, and I’m certain there are those who will take exception to what I’ve just said. However, it’s one of the reasons I dabbled in more Eastern thought for a number of years. It felt like it was more about adopting life and daily tasks to the necessities of belief rather than making time in our lives for something external. 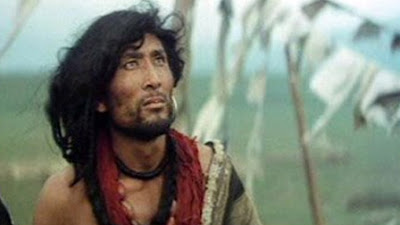 However, this incorporation of belief into virtually everything puts me at a loss for a film like Dao Ma Zei (The Horse Thief). This is a beautifully made film, make no mistake. It is also entirely enmeshed in Tibetan Buddhism, which means that a great deal of what is almost certainly filled with meaning and symbol washes over me without comprehension. I simply don’t understand why particular things are important or meaningful, because I am not a Tibetan Buddhist, or a Buddhist of any stripe. Asking me to would be like asking someone who has talked to a couple of Christian missionaries to find the Christ symbolism in a work of art. It’s just not going to happen, and it’s going to frustrate everyone.

Norbu (Rigzin Tseshang) is a thief. He exists on the fringes of his clan and makes his living as the eponymous horse thief. Life is good until he is discovered as a thief, and is booted out of the clan in an effort to restore purity. He, his wife Dolma (Jiji Dan) and their young son Tashi (Jamco Jayang) are expelled, and the family retreats up the mountain. Soon Tashi becomes ill, and both Norbu and Dolma do everything they can to save him, but it is in vain and Tashi dies. Later, Dolma becomes pregnant again, and in an effort to keep his family alive, Norbu attempts to rejoin the clan, but is forced back into a live of thievery to maintain his family.

It’s worth noting here that I’m calling the main character “Norbu” because this is the name given him on IMDB. The name he is called in the subtitles is different, but I don’t recall it offhand. That, in fact, highlights one of the main issues with this film. While dialogue is very much secondary in the telling of this tale, the dialogue we are given in the subtitles is ridiculous, and Engrish at its very worst (or best, depending on your point of view). We get comments like “I am not horse theft” when Norbu proclaims his innocence. I know what’s meant and it’s generally not that difficult to interpret, but still, it comes off as if the translation was simply pushed through Babelfish and considered good enough.

In terms of the film itself, that’s the biggest problem that can be considered the fault of the film. A much larger problem is that the film is so deeply immersed in Tibetan Buddhism (as mentioned above) that I’m certain a great deal of it washed over me without my even noticing that I’d missed something. There are frequent references to prayer wheels, for instance. I know what a prayer wheel is, and I know the basic function of them, but that doesn’t mean that I understand their cultural value at the sort of level required for this film.

I feel like that’s my fault, even though it really isn’t—it’s just that I’m not capable of this sort of cultural shift to the level needed to really understand this film on a deep level. I’m reminded of Celine et Julie Vont en Bateau and it being suggested that while anyone could enjoy the film, it was only the French who really understood everything involved in it. The cultural separation here is even greater, though. I can certainly appreciate the beauty of the film and the landscapes and the fantastic visuals, but their ultimate meaning and multiple meanings are lost for me.

This is disappointing, but through no fault of Dao Ma Zei. I think there’s a great film here that I just can’t get at because of my own cultural blinders. It’s worth noting that this was the film no less a luminary than Martin Scorsese named as the best film of the 1980s. I wish I could feel the same way, but there’s too much I don’t get standing between me and what’s on the screen.

Why to watch Dao Ma Zei: It’s beautiful.
Why not to watch: If you aren’t immersed in Tibetan culture, a lot of it will be lost.

Posted by SJHoneywell at 7:34 PM