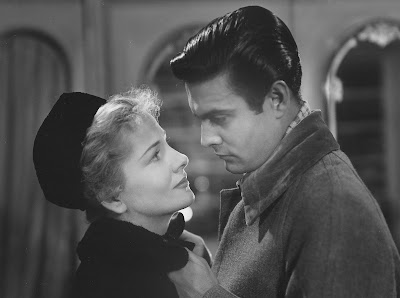 It could be construed from reading selected reviews of mine that I dislike romances. That’s not specifically true. While romance is not my favorite genre of film, there are a number I like quite a bit, and some that I consider to be some of the best films ever made. What I don’t like is melodrama very much, nor do I like it when people pine away. It’s a sort of adjunct of nice guy syndrome. Oh, rather than walk forward and attempt to get what we want, we instead skulk away and pine and sigh a lot. I don’t have a great deal of sympathy for that sort of character once they get past a certain age. Once you’re older than, say, 18, pining away is not romantic but pathetic. Welcome to Letter from an Unknown Woman

We start with an imminent duel between a man named Stefan Brand (Louis Jourdan). It’s evident right away, though, that he’s going to skip out on the duel. His servant hands him a letter that he has received, and Brand begins reading. It tells the story of a woman who has known him his entire life and of whom he has no memory.

Lisa Berndle (Joan Fontaine) lives with her mother (Mady Christians). One day, the talented musician Brand arrives at their boarding house and Lisa is immediately smitten with him and begins pining for him in the way only a young girl can. She wishes for nothing more than to be near him at all times despite the fact that he remains completely unaware of her existence.

One day, her mother announces her intentions to marry a man named Kastner (Howard Freeman) who lives not in Vienna, but in Linz. This forces the family to move, separating Lisa from the object of her affections. In Linz, she meets a young soldier named Leopold von Kaltnegger (John Good), who grows quite fond of her. However, she claims that she is engaged to a musician in Vienna. This causes a break with her parents and she returns to Vienna and eventually meets Brand formally. This leads to a long, somewhat romantic evening with Brand, who leaves for Milan the next day, promising to call her. He doesn’t of course, and nine months later, Lisa gives birth to their child, who she names (of course) Stefan. She never tells him about the son, claiming that she didn’t want to ask him for anything.

Eventually, she gets married to someone else (Marcel Journet). Of course, her path crosses with Stefan’s again and he doesn’t remember her at all. This angers her husband (naturally enough). It is here that she realizes that Brand is something of a cad and a womanizer and never really felt anything for her at all. Eventually, all of this ties back to the duel and to the reason for the letter in the first place.

It feels somewhat heartless to suggest that all of this is a tale signifying nothing, but it sort of is. The entirety of this story wouldn’t exist if Lisa had just a little bit more spine or a little bit more sense. But that’s just the basics here. There’s a much deeper issue regarding this film.

Before tonight, I was certain that Play Misty for Me was the first real stalker film, the first film that concerned a wildly obsessed fan of someone tracking him down and keeping tabs on him at every moment in his life. Now, I’m convinced that Letter from an Unknown Woman started the genre. Admittedly, this is played much more sweetly than Eastwood’s film and much more toward romance instead of paranoia and creepiness. Nonetheless, there is a significant stalker vibe going on here with Lisa’s obsession with Stefan Brand.

It’s also worth noting that the film perpetuates an ugly stereotype. Stefan Brand, by all of his actions, isn’t worthy of any of Lisa’s attentions. He’s a cad and a pig of a man, and while a part of me would love to suggest that Lisa is far too good for him, she’s also not smart enough or possessed of enough courage, backbone, or self-reliance to realize this. When Stefan goes away to Milan, for instance, she’s not despondent when he fails to arrive two weeks later, but immediately, as if she knew that he would never return to her. This doesn’t prevent her obsession with him, but instead seems to intensify it.

It’s an ugly fiction to put forth—the idea that Lisa’s only value is in relation to her connection with Brand. In her own eyes as well as in the eyes of the film, Lisa’s existence is predicated on the existence of her connection to Brand. Without him, she would essentially not exist.

It’s difficult to complain about the quality of the film, which is why I haven’t. It is beautifully filmed and shot throughout. What it’s not is interesting to me at all. It’s a short film and still felt far too long, and it was far too difficult to care about these characters. Brand is a jerk and Lisa is a sap.

Why to watch Letter from an Unknown Woman: A love story filled with heartache and longing.
Why not to watch: It’s also filled with bad decisions.