I’ve been pretty happy with NetFlix in general, but for the second time in as many months, I got a bum disc. As it happens, the film in question (Pepe le Moko) was also playing on Hulu, so when the disc stopped working, I just switched services and finished it up. These things happen. I was disappointed, of course, but it wasn’t that big of a deal. 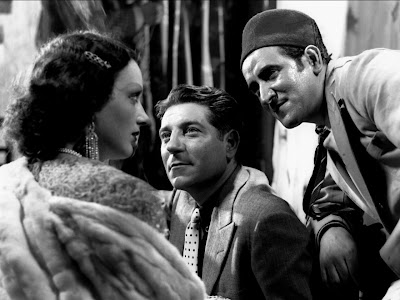 Anyway, had you asked me who Jean Gabin was a couple of weeks ago, I probably wouldn’t have known. Now, by chance, I’ve seen two of his films in relatively rapid succession—the tremendous Grand Illusion and now Pepe le Moko. This was a much more difficult film for me to enjoy, and the bad NetFlix disc didn’t really figure into it. I had a harder time getting into this film and becoming involved in the story.

That story is this—a thief named Pepe (Gabin) is currently hiding in the Casbah. He’s hiding there because the police really can’t arrest him in the Casbah in Algiers(essentially they claim it’s because they can’t find him, although they can. It’s more that doing so would cause too many problems). So, he’s free to move about the Casbah as he will, but he can’t leave. The moment he does, he’ll be arrested and probably put away for 20 years or more.

So, the entire thrust of the film is to come up with ways to get him out of the Casbah and into a place where he can be arrested. This happens throughout the film and in a variety of ways. First, there is Regis (Fernand Charpin), who claims to be Pepe’s friend. Regis is an informant, and while he claims to like Pepe, he also seems to have a great desire to help in Pepe’s capture. We also have Slimane (Lucas Gridoux), who works for the police. Slimane appears to desire nothing more than Pepe’s capture as well. This is despite the fact that Slimane knows Pepe personally and seems to interact with him on an almost daily basis. However, he also refuses to arrest Pepe in the Casbah.

Of course there’s a romance here, and of course it’s a romantic triangle. Pepe has a woman, a gypsy named Ines (Line Noro) whom he has been with for some time. However, just as he is tired of the Casbah, he is also bored with Ines. Of course, part of his boredom with Ines is that he meets Gaby (Mireille Balin), an exotic beauty in Algiers from Paris. The two are immediately smitten with each other. She is attracted to him because he is dangerous and something new. He is attracted to her because she reminds him of Paris, where he’d like to be and can’t be any more.

Really, that’s it. A series of schemes are put into place to get Pepe to come out of the Casbah, and one by one they fail until the very end. The most interesting of these involves Pepe’s friend Pierrot (Gilbert Gil). Regis concocts a plan with the police to bring a letter to him, allegedly from his mother. The letter claims that she is ill and wants to see him. The goal of this plot is to get Pierrot out of the Casbah and arrest him. The hope then is that this will drag Pepe out of the Casbah in search of his friend. It backfires, of course. Pepe sees through it and simply holds on to Regis until Pierrot comes back. He comes back badly wounded and shoots Regis with help, and then dies. This is by far the most interesting scene in the film.

The issue I have with Pepe le Moko is the same issue I have with many films of this type and from this era: people fall deeply in love with each other immediately. It never seems surprising to anyone, either. Pepe is so completely entranced with Gaby that he openly talks about his obsession with her to Ines knowing that she is obsessed with him and will do anything to keep him.

Knowing that, the general tenor of the ending should not at all be a shock. It’s quite obviously a doomed romance, and there are really only a couple of ways that it can end. I’m not going to spoil it here, but I will say this—when the ending did show up, at first I was certain that it was punking out. Then at the actual end, I got the ending I expected, but it got there in a way that I didn’t think it possible to go.

It leaves me in something of a quandary. There’s a necessary part of this ending that I expected—there’s a cathartic moment that’s needed, and I got that. But I don’t like the way in which that ending was produced. It is perhaps tremendously romantic in the original sense of the word, but it’s also terribly unsatisfying.

I was hoping to like Pepe le Moko more than I did. It’s not a bad film, but it feels like a film that has proven to be this important should have made a larger impact on me. I get that it has a great deal of influence—allegedly, it’s the inspiration for The Third Man, which is this film ratcheted up to 15 on a scale of 1-10. This, sadly, feels too flimsy.

Why to watch Pepe le Moko: Graham Greene wrote The Third Man based in part on this film, at least according to legend.
Why not to watch: The ending is right in the most wrong way possible.