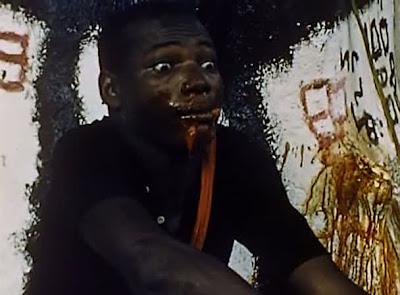 I try not to despair sometimes. I do my best to look at each film as it comes to me, regardless of how I found it, where I found it, the format, the year of creation, the director, or even the quality of the transfer. But sometimes I wonder why I do what I do. I don’t mean to imply that Les Maitres Fous (The Mad Masters) is a particularly bad film, because it isn’t. But I do wonder why I was essentially pushed into watching it. This is a very short film, one of the few films under an hour I had left, and while I can’t say for certain that my half hour or so was wasted, I’m still trying to figure out what makes the film so damned important.

Les Maitres Fous is sort of a documentary, but it’s not clear precisely how much of a documentarian Jean Rouch is for this film. The subject is an interesting one, one that would make a great in-depth cultural study from someone with the right qualifications and coming from an academic perspective. Hell, I’d watch that without question. But that’s not what this film is. Instead, there is a near constant voice-over explaining everything that turns what could be simple observation, allowing the viewer to draw conclusions, into a sort of treatise on race and religion.

The film concerns the Hauka, a religious sect in West Africa centered in the area around Accra in Ghana. Adherents to the religion tended to be rural peasants who showed up in the city and worked as laborers. The Hauka religion is based on the possession cults of the Niger River Basin, and, at least based on what is shown in the film, has a great deal of similarity with Voodoo. It also seems to have a great deal in common with cargo cults.

Rouch films the yearly ceremony of this particular sect. The participants arrive and are possessed by a variety of spirits, all of which deal specifically with Western civilization. Instead of, for instance, being ridden by loas connected with religious and spiritual power as in Voodoo, they are possessed by spirits like the governor general, the doctor’s wife, and the corporal of the guard. Evidently, just as Voodoo incorporates a great deal of Catholicism, Hauka brought in things from Islam, which was prevalent in the area.

That’s really all there is here. We watch an edited version of the ceremony, which involves killing a sacrificial dog and eating it, and then everyone goes home. What happens, though, appears to be both reminiscent of the former colonial masters as well as connected to more traditional West African religious forms. For instance, the celebrants frequently break into groups for round table discussions. The fact that there isn’t a table for them to sit around doesn’t seem to matter to anyone. It also doesn’t seem to matter that everyone is literally foaming at the mouth, a fact that is frequently placed front and center in the film and is about as disturbing as it sounds. Our governor general, wicked major, and engineer frequently have long strands of foamy drool hanging from their chins.

The problem is essentially how to view the film. Is it an honest portrayal of this particular ceremony? Or is it instead a view of those crazy heathen rituals in which the spirits of people we take for granted are invoked because those West Africans are just so silly. I’m fairly certain that Rouch intended the former, but I’m not sure if this intent actually comes through in the final film. There is a sense of the same sort of thing I saw in Mondo Cane when I watched that—a sense of shock video, of seeing something not as an exercise in faith and religion and culture, but as something to point at.

Sadly, I don’t know if there’s a way around this. It simply is there, intentional or not. Any time ethnography looks at what we consider a “primitive” culture, the ghost of racism sneaks through. Rouch may well have intended nothing more than documentation, which is admirable. My lack of essential faith in humanity, though, leaves me thinking that many people will look at something like this and see only wacky savages. It’s the mouth foaming that brings that to the fore. I don’t know enough to know if that’s part and parcel of typical possession religions. Regardless, it’s the part of the ceremony that seems in many ways the most foreign—even more than the people burning themselves with fire.

So is it religion as religion or otherness as spectacle? I don’t know. I hope for the former, but suspect the latter.

Why to watch Les Maitres Fous: A glimpse into religion and culture.
Why not to watch: It’s hard to tell if the racism is simply there or intentional.