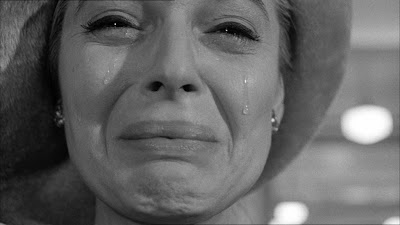 Criticizing film becomes interesting when a difficult film pops up. With a film like The Pumpkin Eater, I am put in one of those difficult and interesting situations. I would be hard pressed to suggest that I enjoyed this film. It’s far too depressing and emotionally claustrophobic to call it something that I liked watching. On the other hand, the performances all the way around are fantastic, particularly in the case of the Oscar-nominated Anne Bancroft. This isn’t to short the equally excellent work of Peter Finch in this film, but Bancroft is really the focus.

The film centers on Jo Armitage (Bancroft), a woman with a constantly growing brood of children and a third marriage. As the film begins, we see Jo in her present looking back at this most recent marriage of hers. Her husband, Jake Armitage (Peter Finch), is a moderately successful screenwriter. He’s also a serial adulterer as we discover with the film’s progress.

We go forward and back in time as Jo relives various scenes from her marriage, the happy early days, the discovery of Jake’s extra-marital escapades, and we see the realization of all of this expressed in Jo’s face. It’s important to keep in mind that Jo is a woman with two previous failed marriages; a divorce here would (at least in 1964) brand her as something of a pariah.

Everything come to a head at the same time, and a number of issues appear in Jo’s life simultaneously, forcing the sort of secluded breakdown we see at the start an in pieces throughout the film. Jo, for instance, in one moment simply bursts into tears in the middle of a store. She is viciously attacked verbally by an unknown woman in a hairdressers simply for being the wife of a famous person and not showing enough sympathy to the other woman’s plight.

So what happens? First, her father dies. Before the funeral, she reveals to her mother (Rosalind Atkinson) that she is pregnant yet again, her seventh (if I counted all of the kids correctly) and second with Jake. Her mother is appalled, and when the mother reveals the pregnancy to Jake, problems erupt. Jake is uninterested in another child, as he is already raising Jo’s brood from her previous marriages. He had hoped for something different and not another trip to the diaper pail. Over time, he forces Jo into an abortion and being sterilized, preventing any future pregnancies. We learn in a session with her therapist that it’s entirely possible that Jo forces herself into pregnancy to justify her desire for sex—if there’s procreation, it must be okay.

It’s also at this time that Jo meets Bob Conway (James Mason), who is married to Beth Conway (Janine Gray), an actress in Jake’s latest film. It takes some time for him to get there, but he eventually confronts Jo with evidence that not only has his wife had an affair with Jake, but that she is pregnant with Jake’s child. Mason’s performance here is a thing of brilliance. Under his genial exterior, this is a man boiling and ready to kill. His anger at his wife’s infidelity expresses itself by lashing out at Jo and ways both mocking and cruel. She lashes out herself by returning to her second husband for a night and a brief affair of her own.

The unanswered question of the film is the determination of what causes Jo’s unhappiness. It’s possible that it’s as simple as the fact that Jake is not only unfaithful to her, he has been so over and over throughout their entire marriage, starting even before their houseguest Philpot (Maggie Smith, and a young and sexy Maggie Smith for you Harry Potter fans) and continuing to the present. It’s possible that this is compounded by what she might consider the loss of her womanhood or desirability after the abortion and operation. Jo is a woman at least in part defined by not only her children, but her ability to produce children, and it is suddenly stripped away from her. It could simply be the realization that every one of her marriages has failed in some respect, and that it could be argued that the only constant factor in all three is her. It could also be her own foray into adultery that ultimately catches up to her. Or all of these things. However, since we’re never told outright, we’re left to interpret from what we see.

I don’t consider myself a feminist critic because every time I see a film like this, I realize that there are two ways to interpret the conclusion. At the end of the film when Jo returns to her husband and children, it could easily be taken as a feminist message in the sense that Jo chooses her life at the end and makes the decision that she considers the best. She sacrifices herself and potentially her happiness for the needs of her children, but does this consciously. On the other hand, I can see the opposite just as easily—Jo returns to cheating husband and children because that’s her place and there’s nothing else for her to do. It’s frustrating, because I’m not immersed enough in the criticism to determine which I think was intended. I think both, but that’s unsatisfying. It’s movies like this that make me feel stupid as a critic.

In any event, it’s the performances here that sell the piece. Bancroft is brilliant because so much of what happens does so without much dialogue but is communicated in her face. This requirement happens in no small part because this is a screenplay written by Harold Pinter, who was always known for taking every day domestic situations and filling them with a sort of growing panic and menace, often with spare dialogue. That’s the case here, certainly, and Bancroft is more than up to the task. James Mason is perhaps the most menacing he ever was, and that’s saying something.

Suffice to say that I didn’t like this film very much, but I understand why it’s worth watching, and I’m happy to have seen it.

Why to watch The Pumpkin Eater: Real life.
Why not to watch: There are confusingly many possible interpretations.