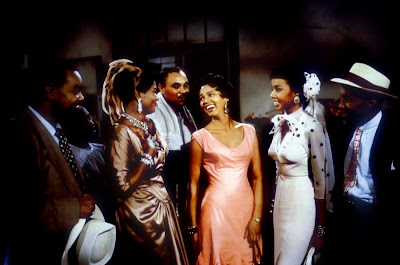 Okay, folks, strap in. This is going to be bumpy.

Carmen Jones is an updated, entirely African-American version of the opera Carmen. I state that straight out because, unlike most film musicals, this is opera. Operas don’t end well. That’s a part of what makes them opera. If you’re looking for smiles and happy endings that normally accompany musicals, you’d best look elsewhere, because you won’t get it here. If you didn’t know that going in, I apologize for the news flash, but really, you should know that this film is based on a larger work. And that’s the way operas work.

If you’re not familiar with the story, here it is. Joe (Harry Belafonte) is a Corporal in the Army right around the time of World War II. He’s just been accepted for pilot training. He’s got a girl named Cindy Lou (Olga James) who is crazy about him. He wants to marry her during his 24-hour leave before he deploys to flight school. But there’s a problem. Standing in his way is Carmen Jones (Dorothy Dandridge).

Carmen is a wild woman and a bit man-crazy. In fact, her real introduction is a song in which she essentially claims to be a mankiller. She tells us in no uncertain terms that any man who pursues her will not catch her, but that she will inevitably set her sights on any man who plays hard to get with her. Naturally, this means that she has set her sights on Joe. And she gets him, after a fashion. She has a fight with a co-worker in the parachute factory she works in and is arrested for destroying a parachute and for possible sabotage. And naturally, Joe is assigned to take her to prison, but it has to be civilian prison because she’s not military.

Of course, in the process of taking Carmen to the civilian prison, things go off the track, in part because Carmen is a “free spirit” and doesn’t want to go to prison. That, and she’s still on the make for Joe, and naturally this is going to happen and Joe is going to forget (at least temporarily) all about Cindy Lou. After their passionate little fling, Carmen runs out, leaving Joe in the lurch. He can’t get his leave or get to flight school until he turns over Carmen. And he quite naturally ends up in the stockade for letting her get away.

Cindy Lou gets a rude shock while Joe is in prison (thanks, of course, to Carmen) and she runs off. Joe eventually gets out. Meanwhile, Carmen has attracted the attention of Husky Miller (Joe Adams), a prize fighter who she naturally has no interest in. Joe finds her, but says he needs to head to flight school, and because Carmen isn’t getting her way, she decides to leave with Sergeant Brown (Brock Peters). Joe puts a beat down on the sergeant, realizes that this will earn him a long stay in prison, and immediately goes AWOL, following Carmen to Chicago. Debauchery, scandal, crime and death follow, all in the classic operatic tradition.

So let’s talk about what the film gets right. First, and importantly, it legitimately updates the Carmen story, bringing it into a new era. The Joe character is still in the military, while the toreador has been replaced (and intelligently, mind you) with a boxer. Additionally, as the film is based not only on Carmen but on the stage version of Carmen Jones, it uses Bizet’s original opera score, and does it to great effect.

But I don’t like the story. I really don’t. I can’t fault the film for this because the film is absolutely true to the source material, and does it well. Dandridge is tremendous as Carmen because she really sells it. But I still don’t like the source material, and so I have a difficult time with the film. Carmen is a truly hateful character, and it’s worth saying that we get a very different story if we do a little gender reversal. If a man acted like Carmen does, he’d be a borderline rapist. But, it’s true to the source, and I have to give it credit for that. I may not like the story, and thus not like the film, but that’s not really a reason to be angry at the film.

You know what is? We have a film that stars Dorothy Dandridge and Harry Belafonte and the studio, in its infinite wisdom, decided to dub their voices with other singers. By all that might be deemed holy in the world of film, that is a horrible, horrible crime. There’s not a single good reason to prevent Dandridge from singing, and keeping Belafonte off the mike absolutely infuriates me.

If you’re a fan of opera, or a fan of the stage version of Carmen Jones, this is a brilliant adaptation of it. For me, the story is unpleasant and filled with unpleasant characters, so despite the spectacle, I don’t enjoy it. But even though the spectacle is there, it really feels like our cast could have been better used, dammit.

Why to watch Carmen Jones: The music is pretty special.
Why not to watch: Harry Belafonte and Dorothy Dandridge aren’t allowed to sing their own songs, which borders on heresy.