Fear is a power with which it is difficult to contend. How we approach fear and deal with fear in many ways defines who and what we are. Fear can cause us to lock up, it can kill us, or it can bring out our greatest and most positive qualities. Paradise Now and United 93 are both films about terrorism, one from each side, but they are just as much about fear—fear of death, fear of life, fear of action, fear of inaction. 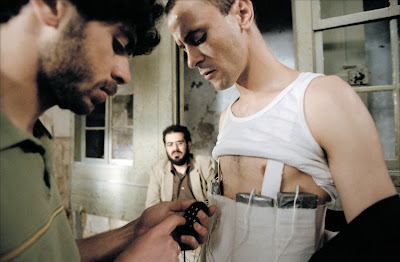 Hany Abu-Assad’s Paradise Now concerns the lives and potential deaths of a pair of Palestinian men, Said (Kais Nashef) and Khaled (Ali Suliman). They live on the West Bank, and as Palestinians, are essentially prisoners in their own land under Israeli occupation, at least in from the point of the film. I’m not going to go into the geopolitical implications of the Palestinian occupation. That’s far beyond the scope of a movie blog. I’ve only get the films as my text, and I bluntly refuse to side with either Israel or Palestine for the sake of a film. In the context of this film, Israel is the oppressor.

The two men work together at a repair shop where Said is by far the more responsible party. He is very attracted to Suha (Lubna Azabal), one of his frequent customers, who is also the daughter of a famous martyr. He is unable to act on this, though, because both he and Khaled have been chosen to become suicide bombers. We see the process they go through—haircuts, a ritualized cleansing, shaving off their beards, a final meal. Essentially, they are transformed from Islamic men into people who could easily pass as Israelis, and put into suits, they truly look the part.

They are told that their cover once in Israeli territory is to claim that they are going to a wedding. The idea is for one to trigger his bomb, killing as many Israelis as possible, and then the second to do the same when soldiers have congregated around the site of the first explosion. As they cross into Israeli territory, though, they are spotted and separated. Khaled returns to his handlers, but Said runs off, essentially on his own. With the mission thus compromised, the effort becomes to locate Said before he is captured, putting everyone in the Palestinian organization in jeopardy.

Of course, it’s never this simple. Initially, it is Said who begins to have doubts about what he is doing while Khaled remains steadfast. However, Khaled spends time in conversation with Suha, who is seeking peaceful means of dealing with the occupation and begins to see things as she does—that true change won’t happen with terrorist attacks, and that these attacks are nothing more than perpetuating the situation. Said, on the other hand, is finally brought back in, disgraced by his evident desertion, but more resolved to carry out this mission.

It is at this point, not during the filming of their martyrdom videos, that we discover what drives Said to act as he does. We learn in conversation with Suha that his father was executed as a collaborator when Said was 10, a very different fate than that of Suha’s father; his martyrdom gives her a certain cache. Said, essentially pleading for both his life and a second chance to die in his chosen way, discusses his father’s death and collaboration, suggesting not that his father was weak or a bad person, but that the evil of the occupation was ultimately responsible for his father breaking down.

This is a powerful and moving film, and a great deal of its power comes from the ending. Typically, when I discuss the end of a film—especially one this is lesser known and less commonly seen, I put it under a spoiler warning, so that’s where we’re headed now.

Ultimately, both Said and Khaled are given a second chance, but Khaled claims that he went only to convince Said of the folly of going through with the suicide. Said agrees, and the pair go back to the car that dropped the off. Khaled gets in the car and Said closes the door, commands the car to drive off without him, and he returns to carry out his suicide. We see the important people in his life now—Khaled, his mother, Suha—and we return to Said, now sitting on a bus in Tel Aviv. The bus is filled with people, and the camera slowly pulls in on Said’s eyes before the sound is dropped completely and the screen goes white. Roll credits, also completely silent. This is a powerful choice at the end of the film, but a good one. As the credits roll, it gives the audience a chance to at least attempt to understand the implications of what has happened.

It is unfair to claim that Paradise Now is sympathetic to terrorism or terrorist attacks. Abu-Assad is a talented enough filmmaker to have created a film that is unquestionably sympathetic to Palestine, but that attempts to show the actions of the terrorists from multiple sides. It is equally concerned with the viewpoint of Suha as it is with Said’s ultimate decision and the indecision of Khaled. It is also, because of its subject matter, a film that will not play well with many Americans, particularly those unwilling to even consider a story that tells its tale from a perspective potentially sympathetic to terrorism. 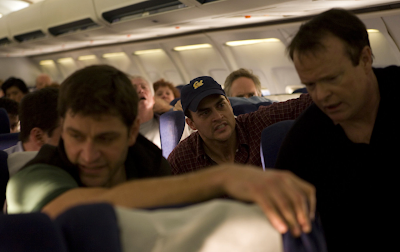 There’s no real need for a spoiler warning for Paul Greengrass’s United 93. If you don’t know what happened on September 11, 2001, you’re either very young or haven’t spoken to anyone in more than 10 years. This is the story of the United flight that didn’t crash into the World Trade Center or the Pentagon; this is the craft that instead crashed in a field because the passengers fought back against the terrorists. The film plays out in real time, from the boarding of the plane and the crashing of the other airplanes into the World Trade Center to the end of the line for United 93.

I won’t say that it’s not worth a plot summary, but that a plot summary here shouldn’t be necessary, at least no beyond what I’ve just typed above. The terrorists take over the plane, the passengers fight back and a battle ensues for the cockpit and control of the plane.

Greengrass does a lot right with this film. First, the film progresses in real time. We aren’t given a single bit of backstory; we see no planning from the terrorists. Instead, we see people boarding the plane and people working in the tower. There is no time for us to really get prepared for what is going to happen, even though we as the audience already know where this is going. In essence, we react with prior knowledge, knowing what is going on when planes start disappearing off the tower radar even as we see the tower trying to piece together what is happening. There are no flashbacks to the lives of the passengers. It’s just the flight and the chaos.

Another point Greengrass gets right is that this film doesn’t feature any recognizable stars. These aren’t Hollywood regulars dying on an airplane like heroes, but regular people, people who look like anyone and everyone. It’s a smart decision, because it’s real. The people on board United 93 were just average people.

The third and most significant thing that this film gets right is that it tells the story without any embellishing. This could have very easily turned into the equivalent of ‘Merica! Fuck yeah!, which would have cheapened the power of the story. Instead, the story simply plays out, and we see the simple heroism of the passengers fighting back against their attackers. This is the best and most telling decision made on the film—to simply tell the story without adding any additional (and frankly unnecessary) symbolism or meaning.

The biggest issue United 93 faces is that anyone who remembers this day knows exactly what is going to happen here, although this does not in any respect lessen the power of the story being told. There are no surprises here, though. There is also the problem of simply dealing with this story. The trauma of this day, despite being years ago, is still incredibly raw. There will be many people who find this film unwatchable simply because of the intensity of what happens and the memories of that day.

What Greengrass has done, though, is create a difficult film as it could best be created. He presents the story without comment, but lets it simply play out on the screen, and wisely chooses not to show us the final impact.

This is a film that I shied away from for years simply because I did not want to relive that morning, and it is not a film I will choose to watch again. That said, it is also a film that I cannot help but recommend.

Why to watch Paradise Now: Discovery of the other side of a terrible equation.
Why not to watch: In a very real sense, you are placed into sympathy with terrorists.

Why to watch United 93: Heroism.
Why not to watch: Reliving one of the worst days in modern history.