Zen and the Art of Garden Maintenance

Film: Being There
Format: DVD from Rockford Public Library on laptop. 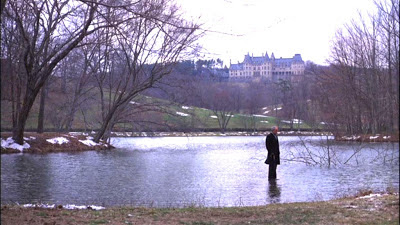 Being There is a film that I watched far too early in my life. I was just a kid when I saw it the first (and only) time prior to today. If memory serves, I watched it because my mother really liked it. I can’t remember if I saw it with her or on my own, only that I did see it and that I really didn’t get it completely. That being the case, I wasn’t a huge fan of the film. I couldn’t get why no one twigged to the reality of the main character. It all seemed so silly.

So now I’ve watched it again, and my opinion hasn’t changed a bit. I still can’t see why no one understands that the main character is a child in a man’s body, an intellectual tabula rasa. As an adult, I see that this is where the comedy comes from. I still, though, don’t get what’s so funny about the whole thing. I freely admit that my earlier experience with this film may well be coloring my interpretation of it now.

The bulk of our time is spent with Chance the gardener (Peter Sellers), a simple-minded man who works in the large house of a wealthy old man. When the film begins, the old man has died. It soon becomes evident that Chance has no way to deal with this information, and in fact doesn’t really understand it. Chance, we learn, has always lived at this house for as long as he can remember. He has no education and cannot read or write. He’s never been outside of the grounds of the house, never ridden in a car, and doesn’t understand anything of how the world works. The maid, Louise (Ruth Attaway) is disturbed by his non-reaction of the old man’s death, but ultimately understands that Chance is incapable of really understanding what has happened. Later that day, Chance is kicked out of the house by the lawyers coming to deal with the old man’s estate, the old man having left no provision for Chance in his will. This seems needlessly cruel to me.

Left to his own devices, Chance would undoubtedly die of being mugged or from starvation in a few days. Fortunately for him, he is struck by the car of Eve Rand (Shirley MacLaine), the wife of Benjamin Rand (Melvyn Douglas), a wealthy and influential but very ill man. Chance is taken back to their house and wants only to work in their garden. However, his clothing and an unfortunate mishearing of his name causes everyone to believe that his name is Chauncey Gardiner. Everything Chance/Chauncey talks about is about the only two things he knows: gardening and television. Everyone assumes, however, that he is speaking in riddles and metaphorically, and everything he says is taken as deep and meaningful.

Soon the influence of Chauncey Gardiner extends as far as the White House, as the president and friend of the dying Ben Rand (Jack Warden) soon comes to value the garden-based advice he offers as insight into the economy.

This is a difficult film for me to judge for a number of reasons. On the positive side, it’s filled with a great many solid performances. Melvyn Douglas is stellar as always (and picked up a Supporting Oscar as proof). I also like Shirley MacLaine here fairly well. It’s also worth mentioning the underrated Richard Dysart as the family doctor who attends Ben Rand as well as Chance’s initial injury from the car accident. This film belongs entirely to Peter Sellers, though, who turns in perhaps the greatest performance of his career. It is very much an Oscar-bait role, and while nominated, he did not win. In his opinion, he lost because the film was initially released with a blooper real over the end credits, which he believed detracted from his performance. He may well be right. Within the context of the film, he never breaks character. According to IMDB, he patterned himself in many ways after Stan Laurel—I wouldn’t have made the connection initially, but once I knew that, it was impossible not to see it in every frame. For whatever it’s worth, it’s a tremendous performance all the way through.

But that’s not my issue here. What I don’t like about this film goes back to the very problem I had with it as a kid when my age was just a few years into the double digits: I just don’t get it. I can’t for the life of me understand how a collection of otherwise smart, dedicated, successful people can’t see that Chance is, intellectually, about five. Over and over again, they have to do all of the work in any conversation, and they’re willing to do it for whatever reason. In that sense, it’s almost a retelling of The Emperor’s New Clothes.

I said a month or so ago that Pinocchio was in many ways the purest naïve character ever created for a film. I had forgotten about Chance, who is equally devoid of personality and any basic skill. In his own way, Chance is sort of a Zen Buddhist saint, a person who is purely and totally in “the now” because he has no effective mental past and no real conception of the future. But how saintly is he if he got that way through no design of his own? How much wisdom really falls from his lips if he doesn’t understand the wisdom himself (Kevin, I expect an answer on this). The final (and I admit, truly wonderful) shot of the film only emphasizes this impression.

With that going against it, I have a hard time enjoying this film. Once I remembered where it was going, I just wanted it to finish up so I could be done with it. I get why people like it, or are enchanted by it, but I’m just not one of those people.

Why to watch Being There: It’s one of the great performance of Peter Sellers’s often-magnificent career.
Why not to watch: It’s ultimately difficult to buy into it with much conviction.