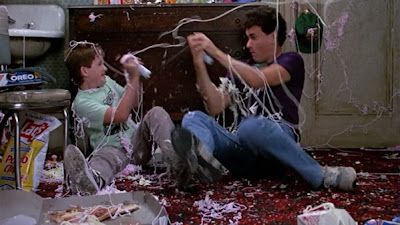 Big is the film that made people sit up and start taking Tom Hanks seriously. His career before Big had some good movies, but they were all comedies, and Hollywood doesn’t take comedy that seriously. Sure, there’s a lot of comedy in Big, too, but there’s a lot more here. The film requires a great deal from Tom Hanks, and he delivers like the actor we all discovered he was in later films.

Young Josh Baskin (David Moscow) is a pretty normal kid with normal kid desires and crushes. At a carnival, he makes two important and devastating discoveries. First, the girl he has been crushing on has a boyfriend who is capable of driving (this pushes believability a bit, since Josh is 12, and presumably so is the girl). Second, he’s too short to go on the scariest ride. Despondent, he drops a quarter in a fortune telling machine and makes a wish to be big, and is told his wish is granted. It’s only then that he discovers that the machine is unplugged.

The next morning, Josh wakes up big (and is now played by Tom Hanks). He escapes from his house and his frantic mother (Mercedes Ruehl) and, with a little convincing, enlists the support of his best friend Billy (Jared Rushton). They decide that the best course of action is to track down the fortune telling machine and to have Josh hang out in New York until he can get back to his correct age. With no work experience, Josh fudges an application for a computer operator at a toy company. He also manages to impress the owner (Robert Loggia), earning him a massive promotion, a sudden love interest in executive Susan (Elizabeth Perkins), and the undying enmity of fellow executive Paul (John Heard).

The film works almost completely and does so by resisting the urge to play up the comedy at every possible point. There’s tons of opportunity to make hay with a 12-year-old stuck in the body of an adult, and there’s plenty to laugh at here, but Big does a lot more with the premise than simply look for potential for comedy. There’s a good deal of fear and pain going on here as well—being a child in an adult body and an adult world might have some benefits, but it would also be horribly scary, and Big doesn’t spare us Josh’s fears and insecurities.

I say all of this because there is a strange reality in this film that could easily spoil the entire thing if you decide to look at it too hard. From the perspective of his parents, Josh has been kidnapped—simply disappeared. Josh periodically calls his mother to reassure her that he is okay, but this only makes things worse for her, wondering what has happened to her son. From her point of view, Big is most certainly not a comedy.

There’s also the fact of Josh’s romantic relationship with Susan. On the surface, there’s nothing too strange here, but we need to remember that Josh is 12 or 13 (he has a birthday in the course of the plot) when their relationship becomes sexual, meaning that Susan is suddenly guilty of child molestation. Okay, it’s inadvertent, but it’s also an inescapable conclusion.

The third potential issue here is the massive amount of suspension of disbelief necessary to swallow not the premise, but some of the happenings. Josh gets hired despite making up a social security number, for instance. While I can buy that, I’m not sure I can buy the deception lasting for too long. More critically, the sudden appearance of an adult named Josh Baskin in close proximity to a missing child named Josh Baskin? Oh, I know not every abducted child makes the news, but based on the scene where the adult Josh confronts his mother, I have a feeling this one would have gotten some press.

Big works, though, by not focusing too much attention on these more disturbing aspects and instead concentrating on the growth of Josh as a person and his changing relationship with Billy, who continues to be present in Josh’s life. It also works because it manages to tell the story from the perspective of Josh and Billy, not as adults or even pretend adults, but as the kids their characters are. It’s telling, in fact, that the one f-bomb in the film is spoken by Billy rather than an adult; there’s a sense of a broken taboo when this happens, and it’s the moment that snaps Josh back to actual reality.

Beyond all of this darker subtext, though, Big is really, really funny. There are some wonderful moments—Josh and his boss dancing on the giant piano floor in the toy store, Josh appearing at a company party in a truly memorable tuxedo and trying both baby corn and caviar for the first time, Josh and Susan’s first night in Josh’s loft. These are fun and entertaining and silly. More important, these scenes all work because again, they come from the perspective of a 12- or 13-year-old boy attempting to make his way in an adult world and making obvious but completely understandable mistakes.

In short, Big has heart. It’s tender and, despite the massive amounts of magical realism and required suspension of disbelief, surprisingly real. Josh acts like a normal and real kid, and while the script is responsible for some of that, the skill of Tom Hanks is what’s really important here. It’s one of my favorite performances of his, mainly because he does pull off a child in a man’s body so damn well. It’s important not to think too hard or too deeply when watching. Big works best if you take the story at face value and don’t let the potential deeper problems bother you.

Why to watch Big: It’s sweeter than it should be.
Why not to watch: If you think too hard, it’s pretty disturbing.