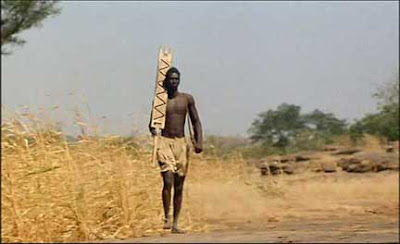 There is a small irony in my watching Yeelen (Brightness) today. Just a couple of days ago, I made the comment that there are films on The List that seem to be on the list specifically because they are obscure and difficult to find. At first blush, Yeelen has that sort of feel to it; one of the first images we see is a chicken hung from a post being burned alive. This film is out of the landlocked African nation of Mali, not the place one thinks of when it comes to film. I won’t go so far as to say these are strikes against the film, but I was initially quite wary.

I should not have been. Yeelen is a film that will strike many a Westerner as strange. This is mostly because, well, it’s a fantasy tale and fantasy tales from other cultures always seem a little weird. Our own ancient stories feel natural to us; those of other lands are often not only strange, but are incomprehensible. Fortunately, Yeelen, for all of its cultural differences end evident oddity, is also a story that fits in the main with the hero tales of more familiar cultures.

Nianankoro (Issiaka Kane) is a young man with a power he does not know he possesses. He is pursued by his father Soma (Niamanto Sanogo), a wizard of great power, who claims his son has stolen the fetishes and other objects of power from their people. Soma pursues his son to kill him and reclaim that power. Mah (Soumba Traore), Nianankoro’s mother, sends her son to find help from his uncle Djigui Diarra (also played by Niamanto Sanogo). As tends to happen in tales like this one, along the way Nianankoro encounters a variety of dangers and trials and learns about his own power and concepts like honor, eventually becoming strong enough to stand up to the might of his father.

In short, this is precisely the sort of tale that Joseph Campbell would love. It fits perfectly into the standard model of the hero’s journey. In that respect, Yeelen is no different from the tale of Hercules or Theseus. While watching, I could anticipate the next plot point without problem, even if the African setting and cultural difference didn’t allow me to know the specifics of what that trial would be.

What that means for the audience is that Yeelen is a magnificent blend of the familiar and the exotic. The details of Nianankoro’s journey are unique to northwestern Africa and to Mali, but the story itself and the journey itself are the same sorts of stories with which most of us are familiar. Nianankoro wanders into a neighboring kingdom and, lost in thought, wanders amid their cattle. He is immediately branded a thief and taken back to the king of the Peul (Balla Moussa Keita). Threatened with death, Nianankoro uses his magical powers to prevent the men from killing him.

And as with more familiar tales, the Peul people suddenly find themselves in terrible trouble with an invading army approaching. They are desperate and ask Nianankoro for his help, going from his potential executioners to supplicants in a matter of minutes. Nianankoro routs the invading enemy with a swarm of bees and with fire, making him a sudden hero to the Peul, a status he loses immediately when he sleeps with the king’s youngest wife, Attu (Aoua Sangare).

There’s a strange and foreign beauty to this film, which is natural considering the land in which it takes place. But it is the familiarity of the story that makes it work. I expected to be lost in this film, and while I’m sure I missed some of the cultural references and the importance of some of the actions that happened, I certainly wasn’t lost in the basics of the film.

Yeelen is not a film I would recommend completely out of hand. For many people, the negatives will simply be too strong to overcome. From a Western perspective, Yeelen is “weird” because it comes from a different culture and isn’t immediately understandable. I know too many people who won’t watch anything subtitled to immediately suggest a film that is not only subtitled but also culturally non-Western. For those willing to experience something filled with beauty, willing to break away from a Western mindset and still experience something that makes perfect sense, Yeelen would be a worthy choice.

Don’t get me wrong, though. There are certainly things here I don’t understand. By far the strangest is the dead guy hitchin’ post. I’d love to explain that further, but I don’t think I will. If you’ve seen Yeelen, you know exactly what I’m talking about. If you haven’t, I’ve just given you another reason to watch it.

Why to watch Yeelen: An old story that will be new for Western viewers.
Why not to watch: Western sensibilities.