Film: Written on the Wind
Format: DVD from Rockford Public Library on laptop.

Melodrama is its own thing. The idea of subtlety and melodrama don’t work together, which makes it an acquired taste. There’s a part of that thinks of the genre as drama for stupid people not able to figure things out for themselves. The whole point of melodrama is that all of the characters wear their identity on the front of the chest like medals. 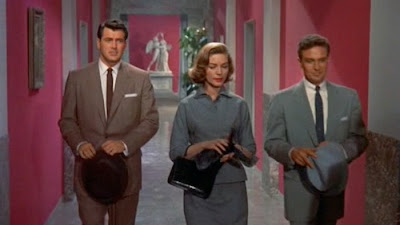 A film like Written on the Wind is melodrama not in the way I tend to think of melodrama. Say the word to me, and I think Snidely Whiplash roping Nell to the railroad tracks. No, this is soap opera melodrama, the kind where someone suddenly is revealed to have an evil twin or gets kidnapped by drug dealers because they look like someone else. Once you realize that this is the world we’re dealing with, Written on the Wind becomes perfectly understandable.

We concern ourselves with the Hadley family, who have made their fortune in the oil business. Family patriarch Jasper Hadley (Robert Keith) runs the company and attempts to deal with his two wayward children. The first of these is Kyle Hadley (Robert Stack), who worries less about learning how to run the business and more about getting his next drink. Kyle’s sister is Marylee (Dorothy Malone), who is for all intents and purposes a nymphomaniac. This is in part because she can’t have the one man she really wants. See? This is soap opera stuff.

The man Marylee wants is the irrepressibly good-looking and solid Mitch Wayne (Rock Hudson), who even has the sort of name that sounds like it’s been chiseled in stone. Mitch grew up with Kyle and Marylee and works for Hadley Oil as a geologist. Mitch is everything Jasper Hadley wants in a son and everything Marylee wants in a man, but his loyalties are limited to working for Jasper’s company and doing his best to keep Kyle out of trouble.

Early on, Mitch meets Lucy Moore (Lauren Bacall), an executive secretary, and introduces her to Kyle. Kyle finds himself infatuated with her and does everything he can to impress her. It backfires terribly until he offers her a heartfelt plea. Suddenly, the two are married and Mitch is carrying a torch for Lucy roughly the size of the one that Marylee carries for him.

From here, there’s booze, sex, impotence, miscarriages, fights, guns, and all sorts of soap opera nuttiness until we come to the stirring conclusion that involves betrayal and ultimately redemption. It’s the same sort of thing you’d get from a good month of any current soap opera, compressed into 100 minutes.

The thing of it is, though, that Written on the Wind is actually pretty good despite the fact that it’s so syrupy you can pour it on pancakes. There’s not any mystery (really) about what is going to happen here—those people who are a victim to their own demons (the Hadleys) will be destroyed by those demons in the end while the virtuous few (Mitch and Lucy) will somehow escape after being made stronger by the experience. But even with this prior knowledge given specifically because this is a melodrama, the film works surprisingly well.

The point behind any melodrama is to broadcast a message in a way that anyone watching would have to be blind, deaf, and not paying attention not to interpret. With Written on the Wind, that message comes through loud and clear. It’s no mistake that Mitch and Lucy are both working class or middle class people who have made good. It’s equally no mistake that the flawed and tragic Kyle and Marylee were raised with money and privilege. Sirk couldn’t be more obvious with his intent if he called the film Fuck the Rich.

But it’s fun. It’s entertaining to see something jam-packed with symbolism so blatantly open to interpretation. It turns out that Kyle Hadley has a low sperm count (or the equivalent) and Kyle Hadley also has a fascination with guns and frequently keeps one on him. I mean, c’mon. When he thinks his place in the marriage bed has been usurped by Mitch, does it surprise us that he reaches for a pistol? In the language of melodrama, do we question his reaching for a symbolic penis when his own has failed him? There are times when such obvious symbolism and metaphor is almost a relief. There’s no digging necessary to ferret out the meanings here. And this only works in a film that’s beautifully made and well-acted, which this is.

Of all the characters, it is Dorothy Malone’s Marylee who is the most interesting, if only because she’s so venal. She takes positive delight in torturing her brother and in throwing herself at Mitch. Kyle is too childish and both Mitch and Lucy too pure to be really interesting. Marylee, though, is corrupted. And it’s not pretty. She’s allowed herself to be morally degraded to the point where she’s not just used to it, she likes it.

I didn’t expect a lot here, and I got far more than I thought I would. I love when that happens. Now if only we could get a damsel in distress tied to a railroad track…

Why to watch Written on the Wind: Only Douglas Sirk could pull off melodrama like this.
Why not to watch: It is melodrama, after all.