So it seems that 2013 is my year of seeing only kids’ films in theaters. While my older daughter has gone on to advanced fare like The Great Gatsby, I am still attending only with kid #2, seeing the latest to come from animation studios. That’s okay with me, really. I watch so much dark stuff on my own that a little levity now and then, a little assurance that it will always work out in the end is probably good for my mental state. 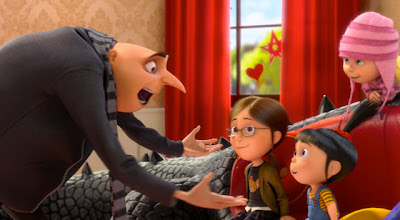 With that in mind, let’s talk about Despicable Me 2, the “you knew there was going to be a sequel” sequel of the 2010 film. All of the characters are back, some in lesser roles, with a new cast as well. This is good news all around. What’s better is that the writing team has managed to keep the sense of the first film and adapt it into a world that has its own history. This is a continuation of the characters, and that’s a real positive.

Former super villain Gru (Steve Carell) is still the single adoptive parent of three girls: techie and bright Margo (Miranda Cosgrove), ninja enthusiast Edith (Dana Gaier), and unicorn junkie Agnes (Elsie Fisher). He’s given up his life of crime but not his giant army of little yellow minions or his basement lab. He’s just converted it into a factory. His efforts to become a legitimate business man see him and his aged assistant Dr. Nefario (Russell Brand) attempting to make a new line of jelly with very limited success.

Early in the film, Gru is kidnapped by Lucy (Kristen Wiig), an agent for the AVL, or Anti-Villain League. She and her boss Silas Ramsbottom (Steve Coogan) want Gru’s help in stopping a new criminal who has absconded with a secret formula that converts anything it contacts into an unstoppable, rampaging, purple monster. Gru, unimpressed with the AVL’s recruitment method, declines the offer. However, since we need a plot, he eventually relents and is forced to work undercover with Lucy at the local mall.

A lot of the film is dedicated to the growing relationship between Gru and Lucy as well as Margo’s sudden interest in boys. Additionally, Gru’s minions start disappearing under mysterious circumstances. All of this quite naturally (and obviously) leads to a confrontation with the villain in question and a horde of formerly harmless minions injected with the secret formula that turns them into rampaging beasts.

So let’s get down to what’s really important with Despicable Me 2. First, it’s funny. There are a lot of subtle jokes here that will pass over the heads of the kids but will amuse anyone older than 35. Of course, there are also tons of references that kids will love as well as the requisite number of fart and butt jokes. It’s all pretty harmless, though. It’s a bit cruder than a typical animation film (it’s rated PG instead of G), but nothing here is really objectionable. Those moments that might be are well disguised to go straight over kids’ heads while landing perfectly for adults in the audience.

I’ll put it plainly—I had fun watching Despicable Me 2. I went because my daughter wanted to go and because we didn’t really have plans on the 4th of July, but I’m happy I went. I was entertained start to finish, and that’s really all I can ask for when it comes to a movie that clearly doesn’t have me as its target audience. There were moments of open laughter from adults and kids, and sometimes at the same things. It’s the sign of a well-made family movie that everyone is able to enjoy it.

More importantly, this is a film that really doesn’t forget some important lessons that many family films do forget. Gru as a character is a pretty fun dad and a dedicated parent to his three adopted daughters. Okay, he’s a little bit of a stereotype with his worry over Margo’s infatuation with an exotic young boy with a sexy accent, but it’s all done very well. It’s nice to see films in which the role of a parent is taken really seriously and the parent is really trying to do his or her best for the kids. As a parent myself, I appreciate this message being given to kids in the audience—we may not always succeed, but most parents really do want things to be perfect for their kids. In that sense, Gru is a pretty good role model.

Despicable Me 2 manages to be fun, funny, and exciting, manages to get in a couple of good and worthwhile messages, and does all of it without turning sappy or maudlin. If nothing else, it should be applauded for that.

And really, the minions are a fantastic creation. I’d almost (almost) be willing to watch the minion movie that they attempt to cast as the credits roll.

Why to watch Despicable Me 2: It’s at least as good as the first one.
Why not to watch: Some jokes won’t work for the kids.

Posted by SJHoneywell at 5:08 PM