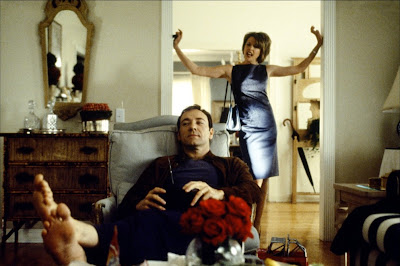 American Beauty is the angriest film I have seen in a very long time. I’m not saying this is a bad thing, but it’s a true thing. This is a film that is fairly seething with violent emotions that then spend the entire film bubbling up to the surface and breaking. It’s the very opposite of a Regency era drama where everyone is buttoned down and afraid of doing anything that might cause offense. And the anger here is from everyone on all sides—our main characters and many of the secondary characters as well. In the world of the film, everyone is a seething cauldron of repressed emotion that needs only the right catalyst to come rushing forward.

Lester Burnham (Kevin Spacey) is a middle-aged advertising executive trapped in what has become a loveless marriage with Carolyn (Annette Bening) and maintains a distant relationship with his daughter Jane (Thora Birch). For her part, Carolyn is an aggressive and somewhat successful real estate agent. She is constantly concerned with appearance—we’re asked to note in the opening few minutes that her gardening shoes and shears match each other. Jane, like virtually every teen in existence, struggles with her self-esteem, which turns her inward. Her friend Angela (Mena Suvari) has the same problem expressed through massively misplaced self-confidence.

The three members of the Burnham family go through a significant life changing event at roughly the same time, a time that corresponds to life changes in a few other people around them. Lester realizes his life is shallow and meaningless just as he is asked to defend his right to work at his current job. Carolyn, wanting to keep up appearances and become more successful, begins an affair with her biggest business rival (Peter Gallagher). Jane becomes involved with Ricky (Wes Bentley), a formerly institutionalized pot dealer who has moved in next door. Ricky is perhaps the only character in the film who has learned to control his anger, turning it into a constant need to videotape everything in his life. His father (Chris Cooper) is a Marine Colonel and a repressed homosexual, while his mother (Allison Janney) is virtually catatonic.

It is Lester who is at the center of this film, though, and it is he who bookends the film with narration. Suddenly infatuated with Jane’s friend Angela, he takes steps to break out of what his life has become. Rather than justify his job, he instead blackmails his boss for a year’s salary, takes a low-paying, no-stress job at a fast food restaurant. He also starts working out (since he overhears Angela saying that he’d be more attractive if he were fit), starts getting high-grade pot from Ricky, and trades in his car on the model he has always wanted.

More importantly in terms of the film (or at least more important in what I saw in the film), Lester stops caring about the things he really doesn’t care about. He accepts his wife’s infidelity when he catches them in it—his lack of reaction seems more troubling for her than the fact that she was caught. Instead, he attempts to recapture the life he had as a younger man with the ideas and personality he has as an adult.

It’s interesting to me that American Beauty was released in the same year as Fight Club, since the two films are similar in many ways. Both films suggest a path through what most of us in our cynical views would consider the bullshit of everyday life. In Fight Club, we see this in people like the Narrator’s boss who is so trapped in appearance of normality that he can’t handle the changes his former employee goes through. Here, the same role is taken up by Carolyn Burnham. Where in Fight Club this pain and existential angst is expressed by physical fighting, in American Beauty it is channeled through contempt, rage, and emotional sparring. Both films attempt to rip back the covering from what they perceive as the rot underneath the pretty exterior of everyday American life. In retrospect, it’s no shock that two acclaimed films (Fight Club admittedly getting more cult than mainstream acclaim) released in the same year include a character bribing his boss.

In fact, it’s the differences in those two scenes that tell the difference between the two films. In Fight Club Edward Norton blackmails his boss by physically beating himself up. In American Beauty, Kevin Spacey—absolutely dripping with contempt—instead threatens his boss’s status and reputation.

I’ve said elsewhere that no one is capable of the same sort of on-screen contempt as Kevin Spacey, and he plays it here to its hilt. And yet he is matched in anger by almost everyone else on the screen. The characters here (unlike Fight Club) are not angry with society or with other people; they are angry at being alive at all.

Naturally, a film like American Beauty has been analyzed to death, with explorations of themes of the artificiality of life in the suburbs, imprisonment, beauty, sexual repression, and more. I see those, but still think that this is a film about the frustration and anger inherent in all of these aspects of life—in all aspects of life, more or less. This film has also seen a backlash against its massive critical acclaim, something it shares with any number of Best Picture winners, particularly when another film of the same year eventually builds up a significant following. It doesn’t deserve the backlash. This is a cynical, angry film—one of the angriest I have ever seen—but this anger doesn’t stop it from being equally beautiful.

Like its namesake rose, there is real beauty here, but getting to that beauty means a lot of thorns.

Why to watch American Beauty: It’s its own brand of genius.
Why not to watch: It’s the angriest thing you’ll see in the week/month/year you see it.

Posted by SJHoneywell at 2:34 PM