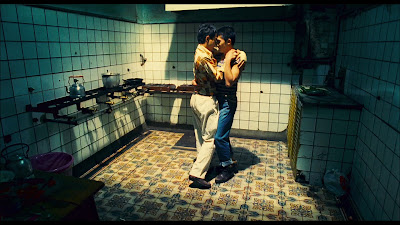 I don’t have a vast amount of experience with the films of Wong Kar Wai. Cheun Gwong Tsa Sit (Happy Together) is the third of his films that I have seen, the others being In the Mood for Love and Chungking Express. Based on this small sample, it would seem that his films are about love, or more aptly about simple human connection, which frequently manifests itself as love, searching for love, or at least as sex. At the same time, it occurs to me that all of these films are not just about connection, but a lack of connection—an unfulfilled desire to make a connection that simply doesn’t happen.

That’s certainly the case with Cheun Gwong Tsa Sit. Fai Yui-fai (Tony Leung Chui Wang) and Ho Po-wing (Leslie Cheung) are a couple who leave Hong Kong and travel to Argentina. This trip seems to be something undertaken as a way to save their relationship, and it’s immediately evident that it didn’t work. Ho is abusive and unfaithful; he frequently brings men to the place Fai works almost to show off his infidelity. It soon becomes apparent that this is a pattern with the two of them. After weeks or months of this behavior, Ho eventually says “Let’s start over,” and Fai always goes along with it.

For much of the film, we see this pattern unfold. Ho walks out of Fai’s life, Fai moves to get away from Ho, Ho shows up and the pattern repeats. Fai always regrets falling back into the pattern, so when Ho appears one night badly beaten, Fai determines to help him recover, but to keep the relationship at arm’s length. But he can’t, and the pattern repeats itself again.

More than anything, this seems to be the entire point of the film—Fai’s growth and determination that he can be something other than a safe place for Ho to return to when his wandering comes to an end. He knows this at the start of the film, but can’t bring himself all the way to it. He finally does make that emotional break with Ho and latches onto a coworker named Chang (Chen Chang). It’s not evident that Chang is gay, but it is intimated that he might be. While this relationship starts to blossom into a genuine friendship, Chang is temporary in Fai’s life. His goal, like Fai’s to see a particular Argentinian waterfall, is to reach the southernmost point in South America, and he eventually leaves Buenos Aries to do exactly that, leaving Fai alone again, this time more despondent than he has been.

This may sound a little harsh, but Cheun Gwong Tsa Sit is mostly interesting because it focuses on a same-sex relationship. It contains the same sort of interesting camera work and cinematography as many of Wong Kar Wai’s other films, but it’s not particularly noteworthy. It doesn’t contain the crushing pathos of In the Mood for Love, for instance. It’s interesting because it’s a relationship we’ve seen in film before, but it’s two men instead of a man and a woman. It’s only marginally more compelling than, say The Unbearable Lightness of Being, or any other film that involves one partner who is true to a relationship with another partner who is not.

And so, it falls to the cinematography, the camera tricks, the moments in slow motion or freeze frame to make this film additionally stand out from the crowd of films on a similar topic. Fortunately, it’s enough. This is a pretty movie to look at, no doubt. Even with a plot that is 90% same old romantic film, 10% oh-but-they’re-gay, it has enough going for it to recommend.

Why to watch Cheun Gwong Tsa Sit: Wong Kar Wai’s films are always worth watching.
Why not to watch: Homophobes need not bother.