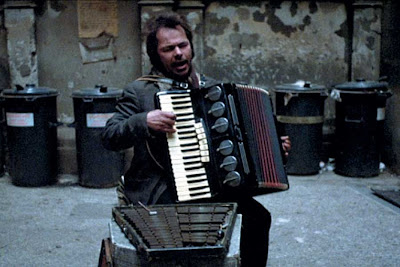 I’ve said a number of films that I have watched for this project are genuinely reflective of real life, but I don’t know if there’s a film I have encountered that does this more effectively than Werner Herzog’s Stroszek It bears some similarity to a film like El Norte, at least in its basic theme of immigrants coming to America in search of a better life and not finding it, but Stroszek injects a great deal of humor into this basic premise, mixing the potential humor of the situation with the tragedy that soon becomes evident.

Bruno Stroszek (Bruno S.) is released from prison, having committed a crime that we are not privy to. He is told that his problems seem come directly from his alcoholism and is warned not to continue drinking. He doesn’t heed this advice and walks from prison directly into one of his old bar hangouts. It is here that he meets Eva (Eva Mattes), a down-on-her-luck prostitute. He gives her a place to live, which causes immediate trouble with her two aggressive pimps.

After some harassment, Bruno and Eva decide to leave Germany for America, accompanying Bruno’s ancient neighbor Scheitz (Clemens Scheitz) to Wisconsin, where he plans to live with his nephew Clayton (Clayton Szalpinski). Once there, Bruno and Eva get jobs, Bruno as a mechanic and Eva as a waitress. Scheitz conducts bizarre experiments with animals and magnetism. They buy a massive trailer, putting it on Clayton’s land, and attempt to live out the American dream.

Unfortunately for them, the American dream remains completely out of reach. Bruno’s drinking increases and the bills start piling up. Soon, they are massively in debt, and the bank where they have loans threatens to foreclose on virtually everything they own. Eva resorts to prostitution again to help make some additional money. This naturally causes a terrible strain between her and Bruno and also proves to be too little too late. Rather than watch everything go to smash, she leaves with a couple of truckers headed for Vancouver, leaving Bruno and Scheitz on their own to watch their world suddenly fall apart. As one might imagine, this doesn’t end well, partly because sudden decisions of armed robbery seldom do and partly because the two men are completely out of their element, not even speaking English.

I’m not completely sure, but I halfway believe that Herzog is poking fun at the concept of the American Dream. At the very least, he’s demonstrating it as a bankrupt concept. Bruno even says it directly; after the first visit to the trailer by the man from the bank, threatening the loss of the television and the trailer itself, Bruno comments that he thought they’d get rich right away when they got to America. But it didn’t happen because that’s simply not the way things work. Bruno seems mildly amused by all of this, but up until the end, he seems mildly amused by almost everything.

One of the most noteworthy moments of Stroszek comes at the end of the film, after a bizarre armed robbery and complete lack of getaway. Bruno and Scheitz rob a barber shop, and either have an insane desire to be captured or have completely lost their minds. Rather than leaving, they walk across the street and go shopping. The police naturally show up and arrest Scheitz, ignoring Bruno completely. For his part, Bruno buys a frozen turkey and wanders into a ski lift area containing a series of bizarre amusement machines. In each, he drops a quarter, which releases an animal (chicken, rabbit, duck) into a viewing area. The animal has quite evidently been operantly conditioned to perform a specific task. A duck beats on a bass drum, a chicken plays a piano, a rabbit pulls a bell on a toy fire truck. The most surprising of the animal performers is a chicken that pulls a cord on a fake jukebox and then dances.

We spend a lot of time watching these animals, especially the dancing chicken. We even come back to them after Bruno has ridden around on the ski lift a few times and we hear the unmistakable sound of his rifle, implying a suicide. And then we’re back to the chicken. It has to mean something, right? It’s not that hard to parse out. Bruno, and to some extent Eva and Scheitz, and everyone else, is just like the chicken. We’ve been programmed, trained, conditioned to want a certain thing. Whenever we’re told, we run out and do our dance and hope that the reward will be forthcoming.

That’s pretty bleak. The genius of the film, though, is that even while it’s bleak, it has a goddamn dancing chicken, which is funny, weird, and kind of awesome.

I don’t think I’d go so far as to call Stroszek an indictment of American society or American ideas, but it’s quite definitely a commentary on them. It’s possible to read Herzog’s message as viewing the concept of the American Dream negatively. It’s equally possible to suggest that the problem isn’t the dream itself, but the flawed and fallible people who attempt to live it out. It may simply be that the American Dream isn’t made for people like Bruno Stroszek, but like a moth to a flame, he can’t help but be attracted to it and burned by it.

Why to watch Stroszek: It’s equal parts comedy and tragedy.
Why not to watch: It’s depressing as hell.