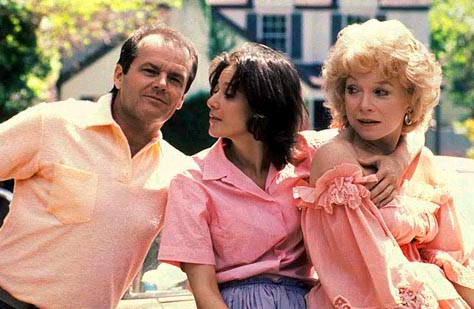 I knew in the first minute I wasn’t going to like Terms of Endearment. How did I know? In that first minute, Aurora Greenway (Shirley MacLaine) decides that her infant daughter has died. To prove it to herself, she virtually climbs into the crib and ends up waking her infant and making her cry. Satisfied now that the baby is screaming, she walks out of the room, pleased with herself. And I just knew that this was going to be the person that I was supposed to sympathize with for the course of the film.

Aurora Greenway is the type of character that film producers call “headstrong” or “willful.” She’s the type who is always right about everything, even when she’s wrong about everything. No one can talk sense into her because she’s just right (dammit) and you’d better get used to the idea that she knows better than everyone else. People like that make me want to jab pencils into my ears. Movie characters like that cause the exact same reaction.

So while Les Invasions Barbares is a film about reconciliation between father and son, Terms of Endearment is the same thing about a mother/daughter pair. Aurora is exactly the same throughout the film. Once her husband dies off, she evidently becomes the most eligible and desirable widow in all of Texas judging by the vast number of men who come courting her. One of these turns out to be her next door neighbor, Garrett Breedlove (Jack Nicholson), a former astronaut who appears more interested in sex and young women than his bristly neighbor, but eventually finds interest in Aurora’s charms.

Daughter Emma (Debra Winger) eventually grows up and marries Flap Horton (Jeff Daniels), a somewhat failed academic who Aurora very much dislikes. She dislikes him so much that she boycotts the wedding. He eventually lands a place in Des Moines, moving the family away from Texas and separating mother and daughter. Flap proceeds to have sex with as many coeds as he can. Emma, after bearing three children, starts suspecting her husband and has an affair of her own with banker Sam Burns (John Lithgow).

Of course, the film doesn’t work if mother and daughter stay apart for too long, so the movie has to conspire to find a way to get Emma back to Texas and, if we’re really lucky, she’ll wind up in the same house. So, the movie conspires to do exactly that—Emma leaves Flap initially because of his infidelity. Then Aurora comes to stay with Emma because it appears that Emma has a malignant cancer. After well over an hour of mother/daughter love/hate, it turns into a medical drama that can and will have only one conclusion.

Ugh. While I know this isn’t specifically the case, it appears that Emma got cancer in this film strictly to teach everyone a lesson about themselves and show us that Aurora was right all along. She was right about Flap, right about Emma moving away, right about everything that she says or thinks.

I had tried to watch Terms of Endearment before with no success. The first time, I didn’t even get a minute in. Once I saw Aurora waking an infant from a sleep and leaving her crying just to satisfy her own paranoia and neurosis, I was done with it. It’s not an overstatement to suggest that one of the reasons this film didn’t get watched until now is that I really couldn’t bring myself to watch it. I’m running out of films to act as cover for those that I dread, though, and finally working through this one was better than having it hanging over my head.

But I’m not going to spend the rest of this getting snarky, believe it or not. I can’t fault this film for being bad, because it isn’t a bad film. It’s a very good film. It’s just not a film that I like very much. It’s not a film that was made for my tastes—I won’t go so far as to call this a women’s film, but it sort of is. My issue isn’t with the acting (consider it was nominated for four acting awards at the Oscars and won two of them), but with the characters themselves, who are infuriating. It’s not the film’s fault that I didn’t like it. In all honesty, it’s not that different from the previously mentioned Les Invasions Barbares, which I loved. It just didn’t work for me.

I will say this; the score was nominated as well, and I disagree with that completely. The score is peppy and bouncy and upbeat and infuriating.

So, Terms of Endearment failed for me, but it won’t fail for a lot of other people. It’s better than my opinion of it, and that’s really about all I can say about it.

Why to watch Terms of Endearment: It won Best Picture for 1983.
Why not to watch: Every other possible reason I can think of.