Film: My Own Private Idaho
Format: DVD from Cortland Community Library through interlibrary loan on laptop. 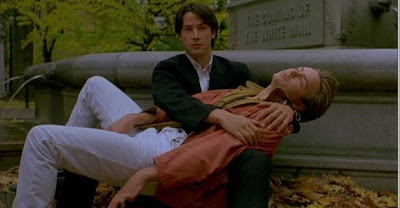 I was not prepared for My Own Private Idaho. I knew going in that it was a film about street hustlers and young male prostitutes. I knew it had River Phoenix and Keanu Reeves in it. I knew there were homosexual overtones (although there’s more than just overtones). But that was all I knew. A few minutes in, I was prepared to complain about the woodenness of the acting, particularly Keanu Reeves, who is often pretty wooden.

And then I got it. It’s one messed up piece of film, tells what seems like a couple of dozen stories, and goes in a couple of hundred directions, but I feel like I got something of a handle on it. Kinda. One of our two street kids is Mike (River Phoenix). Mike is a born hustler, but has some real problems. For one thing, he has significant abandonment issues concerning his mother. He’s also a narcoleptic who falls asleep sometimes for a long time when things get stressful. In addition to this, he’s in love with his best friend, Scott (Keanu Reeves).

Scott is just as much a hustler as Mike, but has a much different past. Scott is the son of a wealthy man and stands to inherit a large fortune when he comes of age. He works as a male prostitute as a way of shaming his father and damaging his political career. Mike and Scott reunite with Bob Pigeon (William Richert), who runs a gang of hustlers out of an abandoned building. He’s something of a mentor to the two and very much a father figure to Scott. Bob is hoping for all sorts of favors from Scott when he inherits his money.

Eventually Mike and Scott go on a sort of informal quest to locate Mike’s mother. They stop first at his brother’s place in Idaho. Brother Richard (James Russo) is quite possibly both Mike’s brother and his father—Mike makes the accusation and Richard doesn’t deny it. He does send them off to a hotel in Snake River, the last place he received a postcard from their mom. The two head there next only to discover that she has gone to Italy in search of her family, which sends the two off internationally, continuing their fruitless search.

Based on that, My Own Private Idaho doesn’t seem like such a complicated or strange film, but there’s much more going on here. I was, as I said above, initially concerned with how wooden the film would become in places. It was most noticeable with Keanu Reeves, but certainly not exclusively noticeable with him. And sure, Reeves sometimes has a woodenness problem. And then there was a specific moment of film when it all clicked into place.

In this moment, Bob Pigeon and one of his followers (played by Flea) re-enact the opening moments from Chimes at Midnight. And the part of the film that I hadn’t understood suddenly made sense. Scott’s story takes its cues from the Welles film. More importantly, Scott’s part of the story, at least initially, is a compressed version of Shakespeare’s two Henry IV plays. Scott is Prince Hal, wayward young man acting in ways his father would not approve of and that threaten his position. Bob Pigeon is Falstaff, who loves the young prince and expect patronage. Not content to duplicate the story, Van Sant instead duplicates everything, including the dialogue. Since that dialogue seems so out of place in a modern setting, it comes off as wooden. The minute I got that, it worked.

Mike’s story is in many ways more interesting because its complexities are less known. Once I twigged to Scott’s equivalence with Prince Hal, I knew where we were going. Mike’s quest isn’t to shame his father but to find his mother. He’s a far more pitiable character because his life on the street isn’t a choice but his only option. His search for his mother comes complete with nostalgic flashbacks that look like silent home movies in faded color, idyllic and simple. His narcolepsy is perhaps overdone, but serves an important function—Mike frequently doesn’t know where he is. He has a fit and wakes up somewhere new. Mike’s life is a puzzle he can’t solve. He’s always sent back to square one by virtue of his faulty wiring.

Gun Van Sant’s visual style and relative youth (this was his third feature-length film) allowed him to play with some of the ideas here. There are several scenes of sex here, as befits a film with male prostitutes at its center. Rather than show us the sex, Van Sant shows us a series of what look like stills. They aren’t stills—the actors are simply holding position for a few seconds to give us the impression of a montage. It’s interesting and beautiful in its own way.

My Own Private Idaho is a narratively tangled knot. It loops around itself and returns to its starting point over and over. We move from Idaho to Portaland to Idaho to Rome to Idaho, always moving out and coming back, frequently to the same point of nowhere on the highway. The same characters appear and reappear as well. Udo Kier shows up multiple times as a client of the two hustlers, for instance. In essence, the narrative looping mimics Mike’s world, always putting him back where he started, never letting him make any real progress. Everyone else is able to move on, but Mike is stuck, always moving but never getting anywhere.

My own Private Idaho is beautiful and strange. It contains its own sensibilities and inhabits its own little world of cinema. I’m not sure it’s a film I’d long to watch again, but it’s not one I would object to watching, and I can see a part of me longing for those open spaces, where the movie is really at its best. The trip to Italy is only vaguely important—there’s no reason it should be Italy rather than anywhere else. Mike isn’t especially out of his element there since he’s frequently confused by his surroundings. Minus this unnecessary move out of the country (and really, Vancouver would have sufficed), there’s a lot here that works far better than it should.

Why to watch My Own Private Idaho: It’s better than it has any right to be.
Why not to watch: The jaunt to Italy is unnecessary.

Posted by SJHoneywell at 5:43 PM