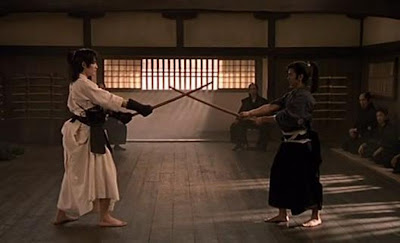 The List takes me to some pretty odd places. This is okay, because I tend to like odd places. Gohatto (Taboo) combines two words that I didn’t expect to see in the same place. Those two words are “gay” and “samurai.” I have no idea of the historical accuracy of this film in how it depicts this relationship; sam-sex couples here are viewed with some distance but no real animosity.

It is a time of war and a militia is looking for new recruits. At a particular dojo, two men are selected. Hyozo Tashiro (Tadanobu Asano) and Sozaburo Kano (Ryuhei Matsuda) are the two selected, and Kano is chosen to perform an execution the next day. It’s also evident that there is a great deal of attraction between these two new recruits. In particular, Tashiro has determined that he is in love with the younger, effeminate-looking man. Kano seems initially antagonistic to this relationship but eventually acquiesces to it.

Kano’s womanish looks, long hair, and physical attractiveness become a point of contention among the samurai in this particular militia. Tashiro is not the only man who becomes obsessed by Kano’s physical beauty and prowess with a sword. This state of affairs is frowned on by the men in charge of the militia, particularly the stoic Captain Hijikata (“Beat” Takeshi) and his assistant Soji (Shinji Takeda). It’s not because of the homosexuality per se, but because having so many men fighting over the attentions of another has potentially terrible effects on morale.

Over time, we learn of other men who are specifically attracted to Kan. One of these men is Yuzawa (Tomorowo Taguchi), who starts an affair with the young man and is eventually killed for it. In an effort to change things, Hijikata charges one of his underlings, Yamazaki (Masa Tommies), to take Kano to the geisha district and introduce him to the pleasures of women. This goes badly and places Yamazaki on the hit list as well—suddenly there is an attempt on his life, since Yamazaki’s attentions toward the young man are construed by many to be romantic as well.

This was a surprising film in many ways. I expected a samurai film and got that, but I expected quite a bit more actual fighting and a lot less homoerotica. I’ve only seen two of Nagisa Oshima’s films including this one, but my guess is that Oshima loved two things more than anything else: blood and fuckin’. There’s not a lot of swordplay (no pun, really) in this film, but when there is, there’s plenty of wildly spraying blood.

There’s thankfully a lot less sex than in Ai no Corrida, but that would have to be the case, since I can’t imagine how it could have had more. There’s no real nudity here, and the sex, with one exception, is implied. And yet it’s constantly evident in the film. Virtually everything that happens in the film relates back to sex or has sexual overtones.

I imagine that this will be badly off-putting to a number of people who have homosexual hang-ups in the first place. This is yet another film on The List that offers an immediate pass to the homophobes in the audience. They, I would guess, will be immune to the other charms of Gohatto because they will be so blinded by all of the gay. That’s a damn shame, because there’s a lot going on here that’s really worth seeing.

For one thing, Gohatto is one of the prettiest films I have seen in a long time. The cinematography is singular and there are a number of moments that are really transcendent. As Oshima’s last film, Gohatto may well also be the culmination of his visual genius. I’d have been happy to watch large swatches of this film with the sound off, not caring about the plot simply to look at the images on screen.

Gohatto is not the film I expected it to be, but I am not at all disappointed in what it actually is. There is a great deal here that I don’t understand. Kano claims to have made a vow preventing him from cutting his hair, but the vow itself is never explained or mentioned more than the one time. There is a moment at the end in which Soji says he has forgotten something that can be interpreted, but since it isn’t fully explained or defined, must be interpreted rather than known for sure.

For me, the real reason to see this film beyond the gorgeousness of the film itself, is for “Beat” Takeshi, who manages to portray a stock role of military supervisor ruling over a trouble group of men and makes it something unique to this film. Gohatto is not for everyone, but for those looking to watch something truly beautiful, you won’t go wrong by going here.

Why to watch Gohatto: It is staggeringly gorgeous.
Why not to watch: Once again, homophobes need not apply.