Solipsism is Its Own Reward

Film: Signs and Wonders
Format: Video from The Magic Flashdrive on laptop. 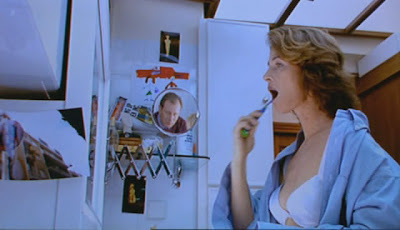 As someone who lacks belief in the supernatural, I find a film like Signs & Wonders (sometimes written as Signs and Wonders) both interesting and incomprehensible. I have a complete and total disbelief in signs or portents of a mystical nature. I don’t believe in premonitions or prophecy. Signs & Wonders is a film that trades on the belief of such phenomena. That’s strangely compelling to me specifically because I don’t buy into it, and I’m interested in the mind that does. At the same time, it’s difficult for me to understand specifically because I do not understand it.

Alec (Stellan Skarsgard) works evidently as a stockbroker. His wife Marjorie (Charlotte Rampling) works at the American consulate in Greece. It’s an interesting (“interesting” in the Chinese proverb sense) time in Greece during the period of this story. It happens just as the Greek military junta (maintained by American influence) is coming to an end, putting the country in a period of flux. The two have a happy marriage and two kids. This hasn’t stopped Alec from having a torrid and passionate affair with Katherine (Deborah Kara Unger), an American co-worker.

For reasons known only to Alec and not really explained to those of us watching, Alec determines that the portents he sees in his life—particular doublings and duplications—mean that he should end the affair after admitting it to his wife. He does so, which forces Katherine away from Athens, since she only stayed there for him. Over time, Alec and Marjorie mend the rift caused by the affair.

And then everything changes again. The family takes a skiing vacation where Alec’s world is thrown into chaos. The reason is that Katherine is also at the ski resort, something he discovers by following more signs and portents. He sees a skier with a long yellow scarf, much like the one that Katherine wore at work. He attempts to backtrack up the slope, and the marks on the slope look like the herringbone pattern on her scarf. He tracks her down, and it turns out to be Katherine herself. And suddenly we are off the slopes and onto a beach. Alec has left his family for Katherine and has returned to the United States with her.

And it all changes again when he discovers that their meeting on the slopes was not an accident, but something pre-arranged by Katherine. He comes to the decision that the signs were false, and he returns to Greece in an attempt to find his wife again. All of this happens in the first 30 minutes. The rest of the film comes down to Alec attempting to find meaning in the things that he sees, part of which is the fact that his wife has taken up with Andreas (Dimitri Katalifos), a Greek activist.

It was around this time, or just after the 30-minute mark that I understood what Signs and Wonders was about. It’s not about obsession, although that’s a pretty solid first guess. Katherine is obsessed with Alec, following him back to Greece and making up a story to get close to Marjorie in the embassy. Alec is obsessed with the signs that he feels surround him at all times. Despite the entire obsession in the film, this is not a film about obsession.

No, I think this is a film about religion. It’s the way it makes the most sense to me. Religion, despite its trappings of being about the world, the universe, and the meaning of life is not, at least from my perspective. Religion is an almost entirely selfish undertaking—it’s the concept that the universe has created us with a purpose, with a specific end in mind, and sometimes conspires to have specific things happen for us in a way that benefits us over everyone else. It’s the height of self-absorption. This, in a nutshell, is Alec. The universe exists for him—signs and portents exist for him and to direct his life, and no one else’s. Everything he sees has meaning, because everything he sees is directing him. In his mind, the universe is created for him. It is solipsism at a disturbing, manic, painful level. It’s also no less true of Katherine, whose world revolves around herself and Alec, and for whom everything has specific and portentous power.

All religion is solipsistic to some extent, and this is particularly true of the Abrahamic, monotheistic religions. These essentially give the believer a hotline to the creator of the universe who frequently makes things happen to specifically benefit the believer. In Alec’s case, this may not be God but the universe itself that arranges itself in particular ways strictly for his benefit. If that’s not arrogance, I’m not sure how that word is defined.

Signs & Wonders is an odd film, and a disconcerting one. There is an overhanging sense of dread around the entire film, a constant feeling that something terrible is going to happen. It’s almost ephemeral, this sense of impending, inevitable doom. It makes watching the film an exercise in tension, and that’s not a bad thing. Director Jonathan Nossiter is smart enough to not translate any of the Greek that is spoken during the film, which helps keep us off-center for most of the proceedings. This is similarly true of the music, which frequently doesn’t seem to match the action on screen. We are constantly being pulled out of what we expect.

Signs and Wonders is another film that I found difficult to watch, but enlightening in its own way. I spent much of the film not wanting to continue from how well certain parts work, and that’s impressive. I’m not sure it’s a film I’ll watch again, but it is one I will remember seeing for a long time. In part, it's because I just don't get the ending, or it might be that I get the ending, but don't like where it takes me.

Why to watch Signs and Wonders: There’s a constant sense of foreboding that’s difficult to top.
Why not to watch: If you are religious-minded, you may not like a particular read on the film.