Whenever I see a really good horror movie, several things occur to me right away. The first is that I’m happy there are directors who try to do more with the genre than just gross out the audience. The gross out is easy. To really scare an audience, to really get under the skin of an audience takes a lot more. It takes a smart director, a cast that agrees to go with it, and the willingness to really take a chance and go for it. I also quickly realize that I would be a terrible protagonist in a horror film. They’d have to kill me off in the first reel, because I’d get the hell out of the house the moment things started getting weird. 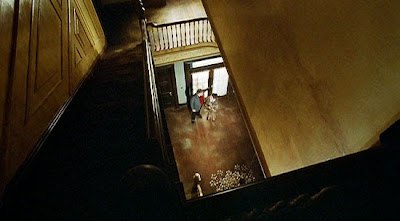 The Changeling, released in 1980, is the goods. It’s the real deal when it comes to spook films. It starts with a bang the way any good horror movie should, then dials everything back and works on the slow build of terror for the next hour. Much like the earlier film The Haunting, it relies on shadow and sound, using everyday objects and subtlety to bring the scares, and bring them it does. There is a genuine sense of the world beyond death here, done with the film equivalent of smoke and mirrors. It plays its audience like a virtuoso plays a violin.

John Russell (George C. Scott) is an acclaimed composer. He sees his wife and child killed in a terrible and bizarre traffic accident. After a period of mourning and finding himself desperate for a change, he returns to his old college as a visiting lecturer. He finds a huge, empty house to rent from the local historical preservation society, giving him a place to compose music and, he hopes, forget about his past.

But you should already know that this is not the sort of house that will let John Russell forget about anything. Very soon after he moves in, strange things start happening around the house. Doors open and shut by themselves. He finds the kitchen and bathroom taps running when no one has been in the rooms for hours. Most disturbing is a series of loud, rhythmic bangs that happen periodically. He starts investigating into the house’s past with Claire Norman (Trish van Devere), learning that in 1909, a young girl tragically died there after being hit by a truck, much the same way that John’s daughter died.

And then there’s a moment just about 45 minutes in that is truly fantastic in terms of ratcheting up what’s going on here. I will not spoil it—it’s too damn good, and is so good because it is so incredibly simple. What follows is a very disturbing séance scene and an equally horrifying revelation from a tape recorder. It was here that I realized that I’d be a terrible haunted house film protagonist. There’s no way in hell I would have stayed in the house. I’d be so far gone that I’d leave scorch marks on the front porch.

As good as the moment I mentioned above is, there’s another that actually gave me a full-body chill. Seriously, I felt the hairs on my legs raise up. That doesn’t happen to me that often, but it happened here with the simple placement of a simple prop at a particular place in the house. It’s moments like this one that show just how smart director Peter Medak is. Made today, this would likely be a moment for CGI horrors and special effects, and it would not be a tenth as effective as what we’re given here. The same thing happened again near the end.

I love films like this. It genuinely ranks high on the boo factor and does it in such an intelligent way that it’s almost impossible not to be scared by it. A big part of this is the commanding presence of George C. Scott. Scott always projects a sort of solidity, a trustworthiness that resonates in his manner. He’s not the type to get all mentally flaked about something being a little off. If he’s scared, we should all be scared.

Again, I want to stress that I don’t always spook so easily. I am someone who watched The Exorcist and then went to bed with no bad dreams. But The Changeling really got under my skin. It’s really very scary, and that’s a marvelous thing.

The Changeling is proof that you don’t need a big budget to make with the big scares. You need a cast that’s willing to play along and a director who has the guts to really try to make a film that does more than rely on the SFX department and squishy dead things. When the results are as good as this, it’s an experiment you want to see tried more often.

You hear that, horror directors? Less is more. If you don’t believe me, sit through The Changeling. It doesn’t hurt that it reminds me of The Devil’s Backbone, nor does it hurt that a film as good as Ringu borrows from it as well. I also realize that I’ve gotten to this point in the review without mentioning the presence of the wonderful Melvyn Douglas, who is as good here as he ever was in his heyday.

Why to watch The Changeling: It’s what horror movies should be.
Why not to watch: If you’re alone and it’s dark, it’ll scare you shitless.