Darkness on the Edge of Town 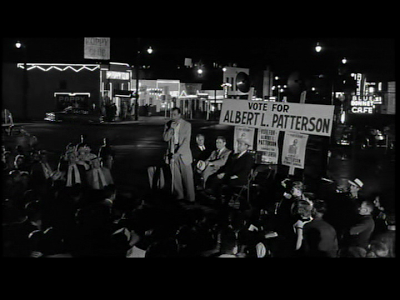 There is a moment in The Phenix City Story that seems so far beyond the pale that I almost can’t believe it happened. I know film noir plays for keeps, but there’s a viciousness here that seems out of place in 1955. Don’t get me wrong—I’m not saying that this is a bad thing. It’s merely a surprising one. The Phenix City Story is ahead of its times in many ways. What seems like a typical film noir suddenly becomes a gangland film of startling violence and evil.

The hook here is that The Phenix City Story is based on an actual story that took place in an actual city. Phenix City, Alabama is located just over the border from Fort Benning, Georgia. As such, the town quickly became a place for soldiers to go on leave, which meant that it soon became a haven for booze, prostitution, gambling, and vice. Many of the good townspeople stand against this, but the town lives under the boot heel of Rhett Tanner (Edward Andrews), who hides ruthlessness behind his friendly demeanor.

But, the townspeople start standing up to him anyway. Vengeance is swift and terrible, and it is here that I realized exactly what makes this film noir different from most in the genre. Bad things happen to people in film noir, but much of the time, the people deserve it, or at least specifically put themselves into harm’s way. That’s not the case with The Phenix City Story. Instead, it’s the innocents who are regularly and terribly harmed. In a shocking moment, this includes the kidnapping and murder of a young child, an action taken strictly as a warning to stay out of the way of the mob running the town’s vice.

Yeah, it’s pretty dark, even for a film noir. The speeding car that tosses out the body of the young child goes on to sideswipe a kid on his bike, which leads Fred Gage (Biff McGuire) to chase down the culprit, an action that puts Fred in the morgue, too. All of this spurs our two main characters into action. The first is Albert “Pat” Patterson (John McIntire), a local lawyer with a solid reputation. With the sudden spurt of senseless violence against innocents, he agrees with a local committee to run for the office of Attorney General of Alabama. The other is Patterson’s son, John (Richard Kiley), who has just returned from Europe after World War II. John’s wife Mary Jo (Lenka Peterson) wants nothing to do with this new war, particularly since it has turned so violent and so ugly, but John wants to clean up his town.

Once The Phenix City Story gets dark, it stays dark. Every kind of corruption and violence is depicted on the screen with a sort of realism that feels very much ahead of its time. There’s a great deal of blood and people being beaten for the terrible infraction of heading to the polls to vote for Al Patterson. It feels very real, and it’s extremely ugly.

But that doesn’t mean it isn’t great in its own way. I didn’t have very high expectations going into this film, but I was pleasantly surprised by just how gripping it really is. It’s incredibly unpleasant, but it’s unpleasant for all the right reasons and in all the right ways. It’s not a bad film, but a film about some very bad people, people who will stop at literally nothing to keep their vice rackets going—something made abundantly clear with the murder of a young child, a scene that is still incredibly shocking almost sixty years after it was filmed.

In fact, it is this viciousness that makes the film so compelling. It’s not important in the watching (but may be in the understanding) that Hollywood naturally put its blinders on for the reality of the story, or at least the reality of what happened afterward. John Patterson eventually went on to become Governor of Alabama, and the film neglects his rather sordid tenure in office, particularly his connection with the Klan and his violent anti-segregationist views. No, instead it opts for a much more melodramatic take on things. The good guys are good and the bad guys are bad, and there’s no similarity between them save their location.

However, as I say, that’s not important for the film, and Patterson’s ugly racial views wouldn’t belong in this film anyway. It’s also worth noting that he (since he’s evidently still alive) has recanted his earlier stances, even endorsing Obama in 2008. Again, this makes no difference to the film, but is worth noting for context.

I had no real expectations for The Phenix City Story, not even realizing it was a film noir until I started watching it. I was pleasantly surprised by it just as I was completely taken aback by its brutality. It’s not a standard noir in any respect, save the vice, and is slow to start. Additionally, the opening 10 minutes or so that go into detail about the actual story aren’t really necessary and could easily be trimmed to a minute or two—we don’t really need that much context. Still, I’m smoehwat surprised that this film is as obscure as it appears to be.

Why to watch The Phenix City Story: Fact-based noir.
Why not to watch: It’s dark, even for noir.

Posted by SJHoneywell at 9:29 PM