Off the Diving Board 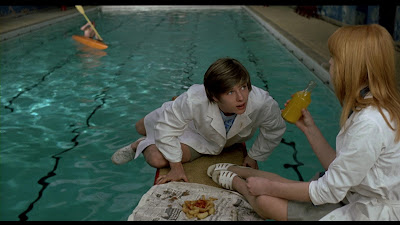 When it comes to films about sexual awakenings, there is no real way to pigeonhole what’s possible. Much sexual coming-of-age films are comedies, and rightly so, since there is comedy both light and dark in the sexual fumblings of the inexperienced. But there are much darker tales as well. Sex itself can be pretty dark business; there’s a definite connection between sex and death and between pleasure and pain. Deep End is a film that explores this darkness and does so in the context of the sexual awakenings of a young man.

Mike (John Moulder-Brown) is a 15-year-old school dropout who gets a job in a public bathhouse. The idea of a public bathhouse is exactly what it sounds like; while some of the clientele may go there for a bath or a swim, what’s really sold is a little something-something on the side by the attendants like Mike. He is taken under the wing of Susan (Jane Asher), who is about ten years older than he is. It’s implied that some of the clients will tip heavily for sexual favors, and Susan makes an agreement to switch clients with Mike depending on the preference of the bather. His baptism into this world of bathroom sex is immediate—his first client (Diana Dors) tips him significantly for allowing her to violently thrust his head into her chest while she talks about soccer players.

Mike quickly develops a crush on Susan and this crush immediately becomes unhealthy. When she goes out for an evening with her fiancé (Christopher Sandford), Mike follows them into an adult theater, takes up the seat behind them, and fondles Susan. Her fiancé runs for the manager, giving Mike the chance to grope her a little more, this time with her encouragement. When Mike is then hauled before the police, Susan disappears, refusing to level a charge against him. Soon after this incident, Mike discovers that Susan is cheating on her fiancé with a swimming instructor (Karl Michael Vogler) who uses the pool—a man who Mike knows as his former gym teacher.

From here, the film sinks into its sordid world of dirty sex. There’s no real other way to put it. This film feels dirty, but it feels that way intentionally. Mike discovers brothels and peep shows, and even a nude cardboard standup that looks exactly like Susan, something he steals, takes back to the bathhouse, and swims with. It’s somewhat implied that he’s having sex with the standup. At the very least, it’s serving as a substitute for the real Susan.

And Susan is hardly an innocent in this. She is complicit in both the sexual awakening and degeneration of Mike, whose unhealthy obsession with her grows daily. It’s impossible to tell exactly what her opinion is. She is at times playful and acquiescent to Mike’s fumbling advances and other times dismissive of someone so much younger than she is. Mike’s sexuality continues to expand in bizarre ways, mainly focused on Susan as the object of his intense affection.

No film like this can end pleasantly, and Deep End does not. I won’t go into spoiler territory here, but it’s worth noting that the ending is sudden, creepy, disturbing, and completely appropriate for what has been built up in front of us for the length of the film. It reveals precisely how far Mike’s obsession with Susan has become and precisely what he is willing to do and willing to risk to be with her in any way. It’s plainly evident as the film concludes that Mike is probably never going to have anything like a normal sexuality.

My biggest complaint here is not the fault of the film; the version I was able to watch had badly muddied sound, and said sound was just a touch out of sync with the video. It was disconcerting in places and I’m certain I missed some dialogue. I’m not too terribly upset, though; really I’m just happy to have had the chance to see the film at all.

Deep End is a title with several different meanings. Much happens at the end in the deep end of the bathhouse pool, but my guess is that it is much more likely the title is referring to the deep parts of Mike’s subconscious and the dark parts of his soul that become more and more evident as the film progresses. He lives in a spiritual and sexual deep end from which it becomes more and more evident that he will never escape.

It’s worth noting that there’s surprisingly little actual nudity in the film. Most of the nudity comes from scenes in the adult theater and from the nude cardboard standup that might or might not be Susan. There are moments of rear nudity, some meaningful embraces and some fondling, but for a film that is so blatantly sexual, there’s surprisingly little actual sex. I’m not sure if that’s a positive or a negative—it’s just a thing. It is interesting, though, provided you don’t mind wandering in the dark recesses of the human soul.

Why to watch Deep End: It’s blatantly sexual without being that sexual.
Why not to watch: It’s also unpleasantly icky in spots.