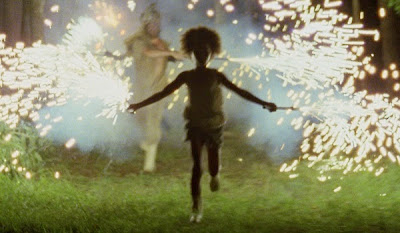 I don’t quite know how to react to Beasts of the Southern Wild. This film is obviously a piece of magical realism, so in that sense, there’s going to be some story stuff that doesn’t have a standard explanation. I don’t mean that—I can handle magical realism.

Beasts of the Southern Wild takes place in the almost mythic place of The Bathtub. It is here that young Hushpuppy (Quvenzhane Wallis) lives with her father Wink (Dwight Henry). She goes to school and evidently learns what it takes to survive in The Bathtub rather than what the rest of us might expect. The area is connected to the mainland and separated from the mainland by a causeway that keeps the people here isolated. Hushpuppy and her father live a life of poverty. Hushpuppy appears to take care of herself more or less because her father is sick, drunk, and often mildly physically abusive.

And then a massive storm, which can really only be Hurricane Katrina comes and floods out The Bathtub. Hushpuppy and her father ride out the storm while many of the rest of the people of The Bathtub leave. After the story, the area is completely flooded; the water stays because of the causeway, which prevents it from draining. A group of townspeople go to destroy the causeway and thus release the water, knowing that doing so will cause the mainlanders to come and take them all to a shelter, which is precisely what happens.

Through all of this, a great deal is made of mythical ancient beasts called Aurochs that have been frozen in polar ice. There is a legend in a town that these massive creatures will return, so of course they do. The Aurochs are gigantic boar-like monsters that tower over the people and their houses. Once they’re freed from the ice, which may be a commentary on global climate change, they start heading toward The Bathtub. I’m not entirely sure why no one sees them, since they are gigantic.

Here’s the thing: I very much get the impression that I’m supposed to like Beasts of the Southern Wild because it is strange and magical. Director Benh Zeitlin has created this place of savage beauty and wonder, a raw, untamed slice of the world where the people live in direct contact with capital-N Nature and survival is an act of will and physical toughness. I won’t deny what I’ve just called savage beauty. Beasts of the Southern Wild is a gorgeous film to look at. It’s no mistake that The Bathtub, while being cut off from the rest of the world and having only cast off remnants of modern technology, live in a world of abundance and plenty.

Okay, sure. That’s all well and good. Once this has been established, though, the film seems to have nowhere to go. We get the big storm, which is in many ways the big scene of the film, and it is impressive stuff. But then we have survival afterwards and the failing health of Wink. And? Giant monsters from the Arctic? The entire point of the second half of the film is to get those Aurochs to The Bathtub so that there can be this cinematic confrontation between two forces of nature: the giant critters and Hushpuppy herself. And?

I genuinely expected to be enthralled with Beasts of the Southern Wild and I genuinely was not. I’m not at all prepared to call this a bad film, but one that I couldn’t help but feel was a good idea in search of a point. The result is a film with some tremendous elements that fit like puzzle pieces that don’t quite match and are jammed together by a frustrated solver. “There,” the solver says, “Those have to fit together like that,” even though they really don’t.

The saving grace of the film is its diminutive star, Quvenzhane Wallis. Roger Ebert called her a force of nature, and to stand up and be noticed in this film, she’d have to be. She is worth seeing along with the beautiful photography.

But she’s not enough to hold everything together, try as she might. Benh Zeitlin rested the entire teetering mass of this unwieldy story on her shoulders and she does the best she can—the best anyone can or could—but she’s simply not enough. I hope that the acclaim Beasts of the Southern Wild has received gives her more and more opportunities to show that she is a name we’re all going to have to learn how to pronounce.

Why to watch Beasts of the Southern Wild: Quvenzhane Wallis.
Why not to watch: It became a thing more because it’s odd than because it’s great.