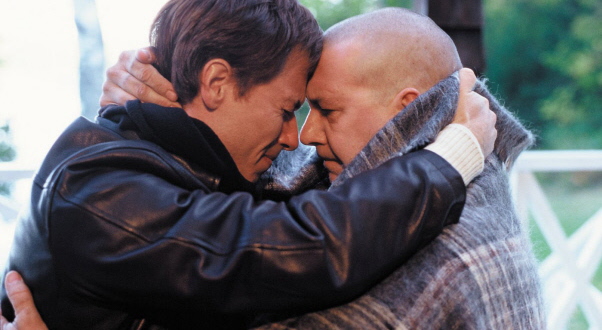 I didn’t like Denys Arcand’s The Decline of the American Empire much. It established a huge number of relationships that ultimately had an extremely convoluted path. It wasn’t that specifically, but the fact that 90% of the film was sex. People talked about sex and their past conquests like people talk about their high school athletic careers. My original plan was to watch it and its sequel on the same day. That then became maybe the same week, or the same month. And here we are, a bit more than two months later and I’m finally coming around to watching Les Invasions Barbares (The Barbarian Invasions).

It cannot be said that this film picks up where the previous left off, given the 17 years between them. Remy (Remy Girard), one of our handful of randy intellectuals from the first film, is dying. I assume it’s some sort of cancer, although I don’t remember anyone being very specific about what was going on with Remy’s internal bits. He’s now divorced and otherwise alone in the world. His ex-wife Louise (Dorothee Berryman) contacts their son Sebastien (Stephane Rousseau), a London banker, to return home to be at his father’s side.

Of course, since Sebastien is a banker and a capitalist, he and his free-loving socialist father don’t really see eye to eye on anything. They immediately fight and Sebastien and his fiancée Gaelle (Marina Hands) come close to leaving. Louise stops them, telling Sebastien of everything his father did for him as a child. Almost reluctantly, Sebastien determines to make his father’s last few days as comfortable as possible. Since the Canadian health service is depicted her as being overwhelmed (patients in the hallways, etc.), Sebastien is forced to dip into his considerable savings to make things happen.

This means renovating a room on an unoccupied hospital floor. This involves considerable bribes to hospital staff and unions. He also undertakes to get his father a stronger painkiller: heroin. He first attempts to go through the narcotics squad of the local police department. When that fails, he makes contact with Nathalie (Marie-Josee Croze), the daughter of one of Remy’s ex-mistresses. Since Nathalie is herself an addict, acquiring heroin for the old man becomes pretty simple.

The big thing that happens is that Sebastien contacts all of Remy’s friends (everyone who was in the first film) and brings them together to his father’s bedside. The group of friends and former lovers spends a good deal of the film reminiscing (there’s plenty of talk of sex, but it’s much less constant). Eventually, they all return to the house where the first film occurred to await the end.

As much as I didn’t like Decline of the American Empire, I very much did like Les Invasions Barbares It’s difficult to dislike a film that is this open and human. There are moments of true pain here as well as moments of genuine happiness. It is emotionally wracking, but at the same time emotionally beautiful. In many ways, it is an encapsulation of life itself. We watch Remy live through his regrets and his pain and also realize what his life has meant to him and to everyone else who has been a part of his life.

Frankly, I’m stunned. When the film started, I expected it to be something that eventually worked its way around to a moment where father and son finally reconnect before the end. When it’s done well, that can give us moments like the tear-jerking ending of Field of Dreams. But I knew it was coming here and I was braced for it. I thought. I wasn’t. The last 15 minutes are as gutting and as wonderful and as heartfelt and real as anything I’ve seen this year.

Almost everyone who has spoken of this and the first film has told me that Les Invasions Barbares is by far the superior film. Boy, were they right. It’s as good a film about family, about death, about life as anything I have seen in quite a long time. Films like this are rare and special and should be appreciated for what they are. They don’t come around often enough.

So all that remains now is for me to kick myself for not making myself watch this a couple of months ago instead of dreading it the way I have been. As much as I disliked everyone in the first film, I like them here. If nothing else, that sort of real redemption is worth something. In a film this superb, it’s worth everything.

Why to watch Les Invasions Barbares: A truly moving family drama.
Why not to watch: The relationships are pretty complicated for a 99-minute film.

Posted by SJHoneywell at 1:53 PM