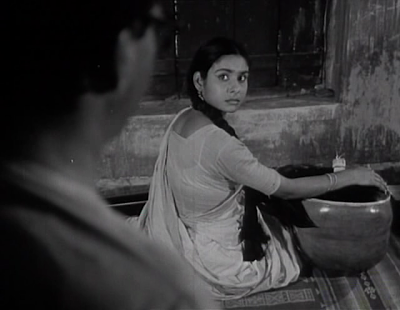 Subarnarekha (commonly called The Golden Thread but called Golden River in the Tome of Knowledge) is a film that I badly misjudged going in. This is the second time I have done this with a film in the last few weeks, and it both cases, I misjudged the films the exact same way. As with Black God White Devil, I immediately assumed that Subarnarekha was going to be another “bad things happen to poor people” film. It’s not—the financial status of the people in the film never plays into anything. Instead, this is a film about the Indian equivalent of racism, although it’s probably more aptly caste-ism.

So what we have is, essentially Guess Who’s Coming to Dinner, but in black-and-white and taking place in India. Ishwar Chakraborty (Abhi Bhattacharya) is a Brahmin-caste refugee forced into India by the partition that created the state of Pakistan. He ends up in a refugee camp with his sister, Sita (Indrani Chakraboorty as a girl, Madhabi Mukhopadhyay as an adult). The two do their best to survive, which is made more difficult when they see a woman driven off and separated from her son, Abhiram (Mater Tarun, then Satindra Bhattacharya as an adult). Ishwar takes the boy in, essentially adopting him as a younger brother.

Things change for the family when Ishwar is offered a job at a factory. He accepts the job despite it not having much in the way of a future because he wants to provide stability for Sita and Abhiram. Eventually things turn around at the factory. It also turns out that Abhiram is a talented writer and student, and is given the chance to study engineer in Germany. It’s also apparent that Abhiram and Sita have fallen in love with each other, a match that becomes impossible when it is revealed that Abhiram comes from a low caste, and is thus not suitable for Sita—and in fact may no longer be suitable for an education.

But, of course, Sita and Abhiram run off together, defying Ishwar and destroying his life. They don’t fare a lot better, which eventually comes to a fairly tragic point late in the film—a point I will not spoil. There’s a bit of an urban legend vibe in the climax, but it does work for the point the film is making.

Almost certainly director Ritwak Ghatak made this film as a sort of reaction to the caste system. It works as an analogy to any other type of oppression and human suffering, though. I wasn’t hedging when I called this an Indian equivalent of Guess Who’s Coming to Dinner, because it’s essentially the same film. There are people who oppress others because of the circumstance of their birth. In the case of this film, the end result is tragedy all around and lessons learned the hard way.

In its way, this is the same film, and the same as any film that deals with any one group or one specific person being treated badly because of who they are. Ishwar, despite essentially having raised Abhiram, is unable to see him as anything but his caste when his caste becomes evident. His prejudice—and the prejudice he had indoctrinated into him—is too strong for him to overcome and accept Abhiram as the young man he raised. Make him gay, and it’s a story about a kid coming out to his or her parents. Put them in Verona, and it’s Romeo and Juliet, with Ishwar playing the role of both the Capulets and the Montagues.

If there is an issue here, it’s that the film takes far too long to set up the meat of the story. It’s well beyond the midpoint of the film that we learn of Abhiram’s caste, which means that the entire arc of the story regarding Sita and Abhiram running off together, what happens with them, and the ultimate fate of Ishwar are compressed into a timeframe that feels too short based on the opening half of the film. A shorter first act would handle the problem of the film feeling top heavy, or at least having the sense of too much exposition.

I found Subarnarekha difficult to relate to, which is why I spent as much time as I did comparing the situation here to one in other films. I understand racism because I’ve seen racism. I have a much more difficult time understanding the intricacies of the caste system because it is something with which I have no contact and no familiarity. It seems analogous to racism, but it’s different in some ways.

That, however, is my limitation and not the responsibility of the film or its director to correct. As a result, my guess is that Subarnarekha is a better film than I think it is. It’s another film where I feel like I am missing too much culturally to really understand the points it was trying to make, and I think that’s a shame.

Why to watch Subarnarekha: It’s a classic of Indian cinema.
Why not to watch: It’s depressing as all hell.