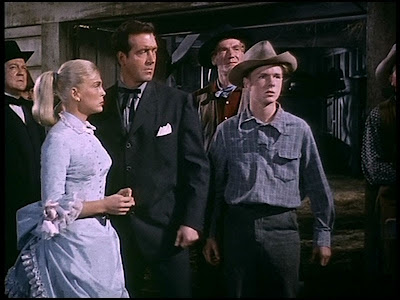 I thought I was done with Westerns until I discovered that Silver Lode was still on the list. As far as I know, this is the final Western film that I’m told I have to watch before I expire, and I think that’s probably a good thing. I don’t dislike Westerns, but I do get tired of them. Certainly there are some in the genre that are a little different or that go to interesting places, or that are Western only in setting, but this is a genre that gets stuck in the same loop more than most others.

Of course, there’s more going on here, and that’s what makes this film somewhat more interesting than it would otherwise be. Silver Lode is very thinly-veiled allegory. This isn’t so much a Western as it is the Red Scare and HUAC and Sen. McCarthy. In fact, one might suggest that this film is that story simply dressed up in spurs. While the parallels to High Noon are evident, it would seem that the basic story works to call into question the detailed workings of the misguided anti-communist legislators from the 1950s.

Dan Ballard (John Payne) is marrying his sweetheart Rose Evans (Lizabeth Scott) on the Fourth of July in the town of Silver Lode. Just as the wedding is about to take place, a group of four men claiming to be federal marshals ride into town looking for Ballard on a murder and thieving charge. This group is led by Fred McCarty (Dan Duryea, and notice the similarity in last name to Tail Gunner Joe), who claims that Ballard shot his brother in the back, and over a card game.

Slowly, the townspeople who begin completely on the side of Ballard, a prominent citizen of the town, begin to shift. Evidence, almost all of it faked and suggested without any proof pushes the townspeople further and further away from Ballard’s side, particularly those who assume that the accusation equates with guilt. McCarty puts himself in position to accuse Ballard of additional crimes of which he is the only witness. For instance, one of McCarty’s men decides to help out Ballard—McCarty shoots his former friend, then claims Ballard was responsible, and with no witnesses, he is immediately believed.

It doesn’t take a genius to see where this film is going, nor to foresee where it will go. It’s also not difficult to see that Dwan’s feelings are entirely on the side of Dan Ballard rather than the slowly growing angry mob of townspeople. As things get worse and worse for Ballard, the idea that it will all end in a final gunfight (Western, after all) followed by a confrontation that includes Ballard’s exoneration become more and more obvious.

But you know what? That’s okay. Dwan doesn’t do a very good job of hiding his allegory here, but he probably didn’t really want to. The intent was to slap the McCarthy hearings in the face of anyone who watched the film, and that’s precisely what he does, making his meaning so evident that there is no way it could possibly be misunderstood. Okay, so it’s a little bit on the nose. And? It still manages to work.

This is not the film High Noon was by any stretch of the imagination. It’s far too simple and lacks anything like nuance, applying its lessons instead with a crowbar. And yet it still manages to tell the story it wants pretty effectively. There’s a genuineness to the psychology of the townspeople, who are instantly cowed by the sight of a warrant and a marshal’s badge. And there are moments of subtlety here, too. It’s no mistake that Fred McCarty’s authority is assumed and doesn’t really exist.

What Silver Lode may lack in finesse it makes up for with guts. I can imagine members of HUAC thinking perhaps Allan Dwan or screenwriter Karen DeWolf might be ripe for sitting in the hot seat based on this film. If nothing else, Silver Lode is worth seeing because watching someone extend a middle finger for 77 minutes at a bully is a beautiful thing to see.

Why to watch Silver Lode: It’s a surprisingly tight little thriller.
Why not to watch: It was better when it was called High Noon.

Posted by SJHoneywell at 1:48 PM