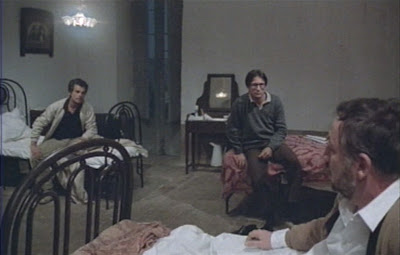 I’m always pleasantly surprised when I find a film that is deceptively simple. Tre Fratelli (Three Brothers) is a strange little film with a very simple premise, but it takes that premise in some interesting directions. I had no idea what to expect with this film, but found myself surprisingly involved with it. It may be as simple as the fact that I am one of three brothers, each of us born about five years apart, and that like our protagonists here, the three of us are very different in many ways.

A farmer named Donato Giuranna (Charles Vanel) sees his wife (Gina Pontrelli) and has a short conversation with her. She then stands up and walks away, waving goodbye to him. We soon realize that she was not waving goodbye; in a moment close to magical realism, she has died, leaving the old farmer alone. He sends off telegrams to his three sons, who respond by returning to the old farmhouse to pay their last respects.

The first son is Raffaele (Philippe Noiret), a prominent judge in Rome. He has been assigned a terrorism case, which puts him in real danger of assassination. This creates a significant strain between him and his wife (Andrea Ferreol) and son. The middle son is Rocco (Vittorio Mezzogiorno). Rocco is extremely religious and works with troubled youth as a counselor at a juvenile corrections institution. The third and youngest son is Nicola (Michele Placido), a socialist-minded factory worker currently going through a labor dispute. Of the three brothers, it is he who arrives with his daughter (Marta Zoffoli), in part because his marriage has broken up and he can’t leave her behind.

The three brothers are, for lack of a better way to put it, congenial strangers with each other. They are different in age and seem to have little in common aside from their parents. Raffaele is constantly worried for his own life, and with reason, if Italian political history is to be believed. Rocco, who on the surface would seem to have the most spiritual reason to attend his mother’s funeral, is completely obsessed with his personal mission to save every child he sees in trouble. For his part, Nicola is consumed with his current work situation, unable to see much of anything else. His daughter, old enough to understand the reason for the trip but with little personal reason to grieve, explores the far on her own.

The night before the funeral, we spend time inside the heads of the four men, revealing their inner thoughts to the audience. Raffaele imagines his own assassination and his grieving wife. Rocco pictures himself sweeping up massive amounts of drug paraphernalia and setting it on fire in front of a crowd of cheering children. Nicola imagines a reconciliation with his wife.

It is Donato’s dream that is the most heartfelt and poignant, though. Rather than picturing his possible future, he instead remembers his past, reliving his wedding and the time when his wife lost her wedding ring on a stretch of beach. For as temporarily real as these different reveries are, it is these simple remembrances that are the most beautiful and touching.

If there is a downside to Tre Fratelli, it is the pace. There isn’t much of a plot here beyond “sons go home for their mother’s funeral,” and even in that, there’s no major conflict between them beyond some surface disagreement on the value of unions between Raffaele and Nicola. Each of the four men inhabits his own world not together with the others, but separately in the same space. Because the plot is merely the four men dealing with death in their own way, there’s not much here beyond it.

Fortunately, Tre Fratelli is a film that doesn’t need a lot of plot to carry it to the end. There is a simple beauty here in the three men returning home and seeing the slower pace of their old home town. In its own way, it takes us through the grieving process with them, and provides a certain catharsis by the end.

This is not a film I can rightly say I enjoyed, but it is very much a film I am happy to have seen. It’s not an “enjoyable” film. It is a beautiful one, though, poignant, heartfelt, and sweet.

Why to watch Tre Fratelli: A film that hides its complexities under a simple story.
Why not to watch: The slow pace.