Film: Lola
Format: Video from The Magic Flashdrive on laptop. 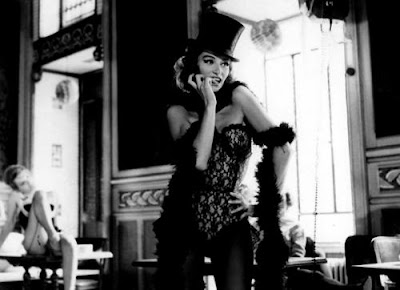 Lola is one of those films that I’ve seen and immediately wonder why I bothered. I don’t mean that this is a bad film, because it’s not. I just question the reason it was a film that made my life incomplete without seeing. Lola is a pleasant enough film and it presages Demy’s later musicals without question, but I simply can’t see it as something essential to my well being and knowledge as a film viewer.

Interestingly, Lola is named after a character who is actually named Cecile and is merely one of the foci of the film. She’s central to the story of a couple of our other characters and has her story as well. None of the stories in the film are deep, each one is mildly interesting, but none of them have a significant impact. Even the strange little crime angle doesn’t add much in the way of tension, interest, or anything else.

Roland Cassard (Marc Michel) is the sort of romantic hero we’ve come to expect in French New Wave films. He’s moderately intelligent, seems well read, and has absolutely no direction in his life. In the first few minutes of the film, we see him fired from his job for being habitually late—and he’s late in general because he doesn’t care enough to show up on time. His job is meaningless to him because his life is meaningless.

Almost at random, he literally bumps into Cecile (Anouk Aimee), a woman he knew years before. Cecile now goes by the name Lola, her stage name stolen liberally from the Marlene Dietrich character in Der Blaue Engel. She has a young son named Yvon. She works in a cabaret frequented by American sailors. In particular, her club is frequented by Frankie (Alan Scott), who is infatuated with her and frequently brings gifts for her son. Frankie believes himself to be in love with Lola. For her part, Frankie reminds her of her one true love, Yvon’s father, who abandoned her when she learned she was pregnant.

All of this would be a lovely little love triangle were it not for the additional complications. By accident, Roland meets Madame Desnoyers (Elina Labourdette) and her daughter Cecile (Annie Duperoux) and offers Cecile an English dictionary. It’s evident soon after that Madame Desnoyers has a bit of a crush on Roland. Frankie gets into the act by befriending Cecile as well, and there’s a definite creepy pedophile vibe going on, although it’s thankfully never acted on.

And so all of these lives spiral around each other, everyone making plans and expressing desires and none of them doing much about them. And suddenly everyone is travelling somewhere. Roland takes a shady job that certainly has criminal elements to it, the job requiring him to travel to Amsterdam and Johannesburg. Frankie’s ship is sailing and he is leaving the Navy to return to Chicago. Cecile wants to run away because her friends are. Lola takes a job dancing in Marseilles. So all these worlds come together at this moment in time and then all fly apart by the end of the film.

I could actually forgive all of this and even be entertained by it throughout. I’ve enjoyed other movies just as much that have had much more staggering coincidences than the ones presented here and I’m okay with it. The people here are pleasant enough if unfocused and don’t have a lot going for them in general. What I can’t forgive is the syrupy ending that suddenly pops up in the last couple of minutes. It’s best handled as a spoiler.

*** GOING ON A SPOILER TRIP *** One of the women that Roland frequently talks to goes on and on about her son, Michel. It’s not a coincidence that Lola/Cecile’s lost lover and the father of Yvon is also named Michel. Knowing that, would it be a shock that these two Michels are actually the same Michel? I can even accept that level of coincidence. But having Michel show up at the tail end of the film with no introduction other than these legends about him and suddenly reappear in Lola’s life as if the previous seven years didn’t happen?

Ultimately, Lola is pleasant enough and entertaining enough, but it feels very much like the end is cobbled on. It reaches an ending, obviously, but it doesn’t earn the ending we get. That’s disappointing, because there’s a better ending that’s right there—and it’s an ending that Demy even used in Les Parapluies de Cherbourg.

Why to watch Lola: It’s as close as you can get to a musical without it being a musical.
Why not to watch: There are some creepy pedophilia moments in it.

Posted by SJHoneywell at 1:59 PM