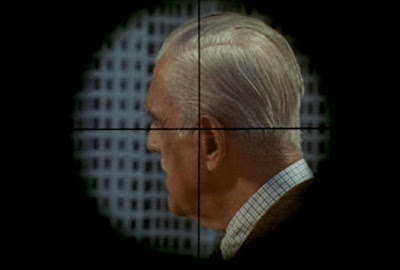 You can say whatever you like about Roger Corman, but you have to admit that the man has an eye for talent. Corman started the careers of a lot of directors. There are a lot of recognizable names who worked as directors on Corman films either early in their careers or at the beginnings of their lives as directors. These aren’t just recognizable names, either—we’re talking about people like Francis Ford Coppola, Martin Scorsese, Jonathan Demme, and James Cameron. The list also includes Peter Bogdanovich and one of his first films: Targets.

This is a film that I’ve been looking forward to seeing since I watched the documentary Nightmares in Red, White and Blue about the American horror film industry. Targets features for a few moments in that film, and it looked intriguing enough that I both wanted to see it immediately and wanted to hold off on seeing it by way of anticipation. Well, it showed up in the mail today, so the wait was finally over.

Targets is a film that could easily be remade today and would be seen as just as relevant and timely now—perhaps even more so—than it was in 1968. There are two stories here that come together tragically and painfully at the end of the film. The first story concerns Byron Orlok (Boris Karloff, in many ways playing himself, or at least a version of himself). Orlok has made his career as an actor in gothic horror films, often as the heavy. He has grown old and his films have fallen out of style. Having completed his latest film, he decides to retire rather than finish off the slow decline of worse and worse monster pictures and the inevitable fading from public consciousness. Screenwriter/director Sammy Michaels (director Peter Bogdanovich) is desperate for Orlok to play in his latest script.

The second story is that of Bobby Thompson (Tim O’Kelly), a Vietnam veteran with what appears on the surface to be a fairly normal and peaceful life. This is an illusion shattered immediately when we see him buying a rifle and then putting it into the trunk of his car where we see that he has purchased quite an arsenal.

Very quickly and very efficiently, we see that Bobby has walked off the end of his mental pier and has entered a very deep, very dark place. The arsenal in the car trunk is there for a reason, and a shooting spree is in the works. It starts suddenly. Bobby is typing a note, of which we see only the word “die.” Moments later, he shoots his wife, his mother, and an unfortunate grocery boy who happened to be delivering food to the house. From here, Bobby takes up temporary residence on top of an oil refinery tower and shooting into highway traffic.

The two stories come together at the end when Bobby Thompson runs from the oil refinery and winds up at a drive-in theater that happens to be where Byron Orlok has agreed to do a farewell appearance, having been convinced in part by his personal secretary, Jenny (Nancy Hsueh). This is a real climactic sequence, lasting a good 20 minutes or so, with Bobby picking off theater patrons while the realization slowly dawns on the patrons that something very wrong is going on.

Targets is tightly wound and does almost everything correctly. In other words, it was very much worth the wait and it lived up to pretty much all of my expectations. The two stories manage to splice perfectly and make sense together. The reason for this is the main them of the Orlok story. He has decided to retire because he has come to the realization that his style of horror movie, the gothic film with fancy costumes and a lot of leering rather than much in the way of genuine scares, has become a thing of the past. In one moment, he points at a newspaper headline about a shooting spree, commenting that his type of horror is no longer scary when compared with the horror of the real world.

The film also manages a nice, believable ramp up to the terrible happenings of the second act. This is a short film (about 90 minutes), so there isn’t a great deal of time for a good slow burn, and yet Targets does display all of the right elements to make the slow burn of Bobby Thompson work. We see the arsenal immediately. On a target shooting range with his father, we see him come dangerously close to killing his dad. We see him withdrawing from his life. So when he does finally snap, it’s entirely believable that we’ve watched his mental wiring get uncrossed and recrossed in homicidal ways.

There are even moments of humor here, mostly coming from Karloff and Bogdanovich himself. Watching Karloff act and act so well is one of the real joys here—I’m an admitted Karloff fan and will happily watch him in most things. He’s old in this film, but his voice hasn’t lost an ounce of its power or impact. And, since he is playing himself, there’s a complete sense of legitimacy to the role.

The best thing about Targets, though, is just how terrifyingly believable it is. This is real-world horror, the kind that happens when we don’t expect it. This is Charles Whitman in a clock tower or the massacre of Columbine or Virginia Tech. There’s no making sense of this kind of tragedy, only surviving through it, something that Targets makes plain. I’m glad I waited to see this until a moment when I needed a lift. I’m also very glad that I’ve had the opportunity to watch it.

Why to watch Targets: It manages to be terrifying without special effects or much of a budget.
Why not to watch: It might make you scared to leave your house.