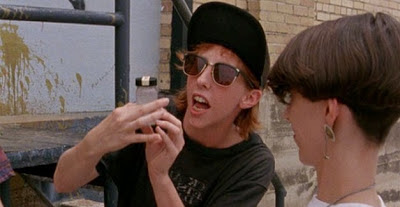 Films like Richard Linklater’s Slacker pose me something of a problem in terms of the typical criticism that I write up. I’ve said before that I tend to be most interested in ideas of narrative and structure. The questions I’m most interested in when it comes to film. Put another way, I like “why” and “how” questions—why does the story work the way it does, how does everything hang together. The meaning of the film is ultimately a “what” question. There’s nothing wrong with this sort of question and there’s a shit-ton of criticism out there that tackles this question and does it better than I can. It’s just not always a question that interests me.

With Slacker, though, there is no story, or at least not one in the traditional sense. This film is typically called “plotless,” which it is. What makes it interesting is that it is not without a story or an idea to drive it forward. There is an idea at the heart of Slacker that makes it work. Rather than driving this idea with a traditional narrative that follows a set of characters from point A to point B, it follows a meandering path through characters all headed in the same lack of direction.

I’ve read that last sentence over and I’m pretty sure that it doesn’t make sense to anyone who hasn’t seen Slacker. I’ll do my best to rectify that.

The film takes place over a day in Austin, Texas. It never spends much time with anyone, moving from person to person for a few minutes at a time. We get a few minutes of someone’s story before hooking up with someone else who was a part of the last conversation or who simply walks past. All of our short vignettes concern the lives of people who are, as the title of the film suggests, living on the underside of society. These are people who are drop outs from society. Deadbeats, losers, unemployed, bullshit philosophers, conspiracy theorists, drips, dips, and outcasts make up the people we spend time with.

We never spend long enough with anyone to get more than a snapshot of his or her life and situation. That’s not important, though, because Slacker isn’t about the people themselves but the world in which the live in and the ennui that that inhabit. It’s loaded with freaks and weirdos. Almost all of them believe that they are destined for something greater than their current existence but are far too lazy, too disconnected, or simply too stagnant to do anything meaningful about it.

In essence, Slacker is about a mood, a youth culture zeitgeist of anti-establishmentarianism. It occurs to me that in a lot of ways, this film should speak to me, since it’s my generation that are the traditional slackers. These are supposed to be my people—I was 23 or 24 when this film was released. I was also out of college, a few months away from being married, and was working as a professional journalist. I can’t relate to these people at all, and more than likely couldn’t have related to them when this film was new.

This puts me in a very interesting position. I’ve said a number of times before that I have real trouble with films in which I can’t find someone to relate to. In Slacker, I find a series of people who actively annoy me, with only a few breaks here and there with people I don’t actively want to slap, both for their attitude and their insanely repetitive speech patterns. But, since the film never leaves me with anyone for too long, I find that the whole thing seems to work. I get that I’m supposed to end up with a particular impression of the people and the time as a whole rather than of a specific person or place. I’m supposed to sense the disaffection and even understand it even if I don’t always sympathize with it.

In fact, in places I do sympathize with it, at least in those places where the pet theory isn’t transplanted nuttiness from the 1960s or simply ludicrous (like “The Smurfs” helping to pave the way for acceptance of blue people, allowing for the bodily return of Krishna). That disaffection of youth is often real and often has a worthwhile point.

Slacker isn’t for everyone. I can see quickly becoming frustrated with the disjointed style and with the losers and drop-outs we’re given to observe. But the gestalt of the film is much more than its bizarre, fragmented parts. It’s a bold experiment, and it’s one that works.

Why to watch Slacker: It’s new in many ways, even 20 years later.
Why not to watch: Some of these people need a mental enema.