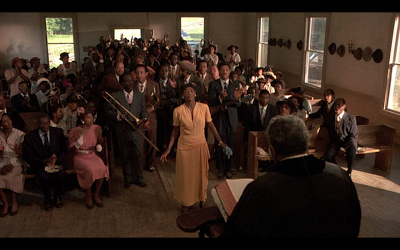 When I wrote up the end of June, I mentioned that there were several films that I was dreading and that I should do my best to get through a few of them sooner rather than later. Behold, The Color Purple, a film that I knew was going to be a rough ride for me, not only because of its length. Spielberg, for all his acclaim, is a director who goes too far into some territory for me. When he’s on, there are few people better. When he gets a particular idea, though, he worries it to death, hammering home his message with as much force as he can. He’s not a subtle director (see War Horse for a more recent example). And with The Color Purple being an “important” film, I knew there was great danger of Spielberg spending 150 minutes on a pulpit.

Here’s the nutshell version. If you are the possessor of a penis, The Color Purple thinks you are a bad person. It doesn’t matter how much you think you’re a good person or even if anyone else thinks you’re a good person. No, in the world of this film, men are all melodrama villains who live only to oppress women. Got that? If you’re male, you’re evil. Deal with it. In fact, the film says, if you are not sexually or physically abusive, you are a weakling.

The Color Purple is the story of Celie (Desreta Jackson as a young girl, Whoopi Goldberg as an adult). She is sexually abused by her father (Leonard Jackson), having two children by the time she is 14, with both children taken away from her. She is eventually married off to Albert (Danny Glover), who is physically abusive to her. When her sister Nettie (Akosua Busia) leaves home because her father is chasing after her, she comes to live with Albert and Celie and teaches Celie how to read. Eventually, she is chased off when she refuses Albert’s advances.

And this is how things go. The women are abused by the men until eventually they learn to stand up for themselves, which they eventually do. But they live in abject servility until that point. There is a bright spot in the person of Sofia (Oprah Winfrey, yes that Oprah Winfrey), who eventually marries Harpo, Albert’s son. Sofia doesn’t take anything from anyone, which lands her in jail, which temporarily breaks her spirit.

A great deal of time is spent with Shug Avery (Margaret Avery), who is a former flame of Albert and becomes something of a lover to Celie as well. It is Shug who discovers that Celie’s sister Nettie has not died or simply never written to her but that Albert has hidden Nettie’s letters from her for years. This is the impetus that gives Celie the strength to stand up to Albert at last, and also rescues Sofia from her broken state.

And so it very much is what I expected it to be. It’s Spielberg doing everything he can to wring every last tear out of every single scene. It’s manipulative in only the way that Spielberg can be manipulative. I’ll hand him this—he’s damn good at it. If I weren’t as a aware of what he can do with a film like this, quite a bit of it would have worked. And even knowing this, some of it still did.

With all of Spielberg’s manipulation, there’s still a lot here to appreciate. It’s effectively the start of Whoopi Goldberg’s career in film, and it’s one hell of a debut, because she is tremendous. She’s had her share of bad films, but The Color Purple showed what she was capable of doing. The same goes for Oprah Winfrey, who was in this before she was the Oprah that everyone knows today. She’s damn good and believable in her role.

But again, it’s difficult to watch this without seeing exactly where the strings Spielberg is pulling are located. It’s the same thing he tends to do with his message films. Sometimes he gets away with it (Saving Private Ryan) and sometimes he really doesn’t (War Horse). Here, he’s as obvious as he’s ever been. Despite this, it’s still pretty damn great when Celie finally stands up for herself. Even when he’s manipulative, sometimes Spielberg can’t avoid being worth watching. Having Whoopi Goldberg in one of her best moments in film certainly helps, though.

It’s difficult to say that The Color Purple is a bad film, because it’s not. As it turns out, I liked this a little more than I thought I would. I can’t say I loved it, and I probably won’t ever watch it again, but I’m okay with it.