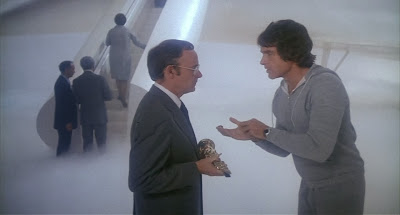 I think I can be forgiven if I assumed based on the name that the 1978 version of Heaven Can Wait was a remake of the film of the same name from 1943. It’s not, though. It’s actually a remake of Here Comes Mr. Jordan with a couple of surface changes. This is a film that runs through a lot of genres. It’s a fish-out-of-water comedy, a fantasy, a romance, a sports movie, and a few other things besides. It’s cute, even if it doesn’t all really work, and the casting is truly inspired.

Joe Pendleton (Warren Beatty) is a back-up quarterback for the Los Angeles Rams—yes, it was made before the team moved. He’s rehabbed himself and with his improved play has put himself in a position to take over the starting job. The team’s trainer Max Corkle (Jack Warden) gives Joe the news that he’s been tapped to start in the next game. In celebration, Joe goes out for a bike ride, but is killed in an accident in a tunnel. Sort of.

What actually happened is that his escort to the afterlife (Buck Henry) took him out of his body right before the accident, and Joe wasn’t supposed to die. When this comes to the attention of the heavenly station attendant Mr. Jordan (James Mason), efforts are made to return Joe’s spirit to his body. However, back on Earth, Joe’s body has been cremated. Joe is intended to have another 50 years or so, which means that allowances must be made. Eventually, he is convinced to inhabit the body of a man named Leo Farnsworth, an extremely wealthy executive who has been murdered by his wife (Dyan Cannon) and personal assistant (Charles Grodin), but whose body has not yet been discovered.

Once in Farnsworth’s body, Joe has a series of goals. The first is to reform Farnsworth’s company into something more people-friendly. He’s convinced to do this because of an immediate attraction to Betty Logan (Julie Christie). He still feels he has a personal destiny to lead the Rams to the Super Bowl, and immediately sets about getting his new body into NFL quarterback shape. He does this by enlisting the aid of Max Corkle, which he does by convincing Max of his actual identity of Joe Pendleton wearing a Leo Farnsworth suit. And, of course, the murder plot against him is still going on, and the Rams won’t give him a tryout until he takes steps that prevent them from stopping him.

So let’s talk about the cast here. It’s important that we like Joe Pendleton immediately, and Warren Beatty is instantly likable in this film. He’s a bit kooky and obsessed about winning the Super Bowl, but he’s also kooky in a fun way and one that is easy to warm up to. It’s a fun line to walk—he frequently looks insane to everyone else, but we as the audience understand exactly what’s going on when it looks like he’s talking to himself. Both Jack Warden and Dyan Cannon were nominated for their supporting roles, and I’d be hard pressed to suggest that they didn’t deserve the nominations. Charles Grodin and Buck Henry are perfectly cast as well; both manage to be bumbling and officious in exactly the right mixture to make them entertaining and either likable (Henry) or dislikable (Grodin). Toss in Vincent Gardenia as a police lieutenant and you’ve got a cast as good as it gets.

Ah, but that leaves off the most inspired piece of casting of all: James Mason. If ever a role called for the perfect combination of charm, gravitas, unmistakable class, and a butter-smooth voice it’s the role of Mr. Jordan. I can think of few people with that combination in those necessary proportions as James Mason. (Cary Grant was the original choice and he could’ve done it. Claude Rains played the role in the original. Those two men plus Mason pretty much run the gamut of names I could come up with for this role.) He’s not in the film much, but when he is, he (as always) is where your eyes look and where your ears tune.

The problems with the film all come in the plot. Surprisingly, the plot problems I have aren’t the ones at the heart of the film’s premise. I may well be a skeptic in all things spiritual, but I’m more than willing to suspend my disbelief for the sake of a good story. No, the biggest issues are the romance and the football.

First, the romance between Leo Farnsworth/Joe Pendleton and Betty Logan is something that happens in a manner too fast and too randomly even by Hollywood standards. Seriously, Joe/Leo proposes marriage to her in their third or fourth scene together. They’ve barely even physically touched at this point and haven’t even had much of a romantic moment before he pops the question. It just doesn’t play and I don’t buy it for a second.

In terms of the football, well, just no. Leo/Joe buys the Rams so that he can force a tryout and he “gets the body into football shape.” Evidently, this takes a couple of weeks. As it happens, I know a guy who played professional football, played quarterback and even did well in Heisman voting. I know more guys who played Division I college ball. Getting into NFL shape isn’t something you do by practicing with your butlers and throwing a ball around. It takes years. A quick high-protein diet and a couple of scrimmages don’t cut it. And even if it did, no team regardless of what the owner wants, would substitute the quarterback for the Super Bowl on the owner’s whim.

It’s all a question of verisimilitude. The film needs to be internally consistent with the world it presents. Heaven Can Wait presents a real world like ours with the inclusion of spirits inhabiting bodies and spiritual way stations in the afterlife. But it presents an otherwise real world. When that real world includes the ability to turn a sedentary businessman into an NFL quarterback in a week or two and people who fall for each other in a single meeting, I check out mentally.

Heaven Can Wait is charming and sweet despite these problems. I had fun with it, and even if it’s got its story problems, it’s entertaining enough to be worth your time.

Why to watch Heaven Can Wait (1978): A great premise and an immediately likable cast.
Why not to watch: The most unbelievable parts of the story are not the parts about a dead guy’s spirit inhabiting another body.