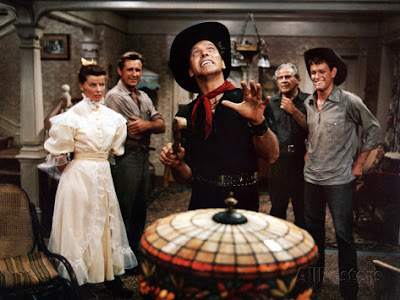 I know it’s not true that it’s been awhile since I watched a film I really liked, but it feels like it sometimes. I genuinely go into each film expecting to like it or at least hoping that I will. That’s certainly the case with The Rainmaker from 1956. Considering that it stars Katharine Hepburn, Burt Lancaster, and Lloyd Bridges, I thought that hope was not unfounded. What I got instead was a movie with a pretty dumb plot, loaded with multiple instances of wild overacting, and that was badly miscast to boot.

We’re first introduced to Bill Starbuck (Burt Lancaster), a con man in the Western states and the Midwest, who travels around on a horse-driven carriage selling a variety of items and services that don’t really work. He initially sells small devices that are designed to prevent tornadoes from striking houses. He gets run out of town and ends up in a small town in Kansas that is hard-hit by drought. While this doesn’t pop out immediately, it’s not a stretch (based on the title) that Starbuck is going to pass himself off as a rainmaker for the drought-stricken town. They’re ripe for picking because the cattle are starting to die off.

Meanwhile we are introduced to the Curry family, or at least most of it. Father H.C. (Cameron Prud’Homme) and sons Noah (Lloyd Bridges) and Jimmy (Earl Holliman) are awaiting the arrival of Lizzie (Katharine Hepburn), the fourth member of their family. Lizzie has been sent off to a nearby town in the hopes of finding her a husband since Lizzie is desperately close to becoming an old maid. Lizzie gets back and we learn that the trip was a massive failure. Lizzie has more or less decided that she’ll probably never get married. The men of the family decide that they’ve got the match for her: local deputy J.S. File (Wendell Corey). Lizzie is interested in the man, but File (and he’s always referred to by his last name, even by Lizzie) has been through a divorce and is uninterested in matrimony in general.

So we’re going to get a collision of these two plots. Starbuck shows up at the Curry home and offers to make it rain within 24 hours for a price of $100. Both Noah and Lizzie think this is a complete waste of money. Jimmy, who is depicted as a little bit simple, is all for it, and H.C. is desperate enough to go for it. For whatever reason, Starbuck decides that he’s going to undertake Lizzie as a project as well and starts to break down her various barriers. Additionally, Jimmy is infatuated with local girl Snookie Maguire (Yvonne Fedderson), much to Noah’s constant consternation.

So here’s where we’re going to get to. Starbuck wants to romance Lizzie, who is more than ready to be romanced, even by someone she thinks is a fraud. File is dealing with his own issues and finds himself interested in Lizzie, too. H.C. and Noah fight over Starbuck’s plans to create rain. Noah and Jim fight about Snookie. And eventually, after 135 minutes, the damn thing ends.

I’d love to go into what the film does well, but I’m struggling here. The Rainmaker is hardly the worst film I’ve ever seen, but it’s also not one I’m ever going to voluntarily watch again. It’s loaded with problems, only one of which (the sexual politics) are a function of the era in which the film was made. Everything else would be as much of a problem in 1956 as I find it today.

I like Burt Lancaster, but not in this. He plays Bill Starbuck as if he is standing on a stage and trying to reach the cheap seats, a good indication that this was adapted from a play. He is bombastic in every moment he is on the screen, and a little bit of him goes a very long way. Sadly, he’s in the film a lot. Not to be outdone, Earl Holliman gnaws on every bit of scenery that Lancaster misses. He’s loud, stupid, and annoying. I realize that this is the way the character is written, but Holliman is still the one in the role and the one that I blame.

I watched this specifically because of Katharine Hepburn’s nomination, and it’s one I absolutely don’t understand. Hepburn is badly miscast in the role of Lizzie. We’re supposed to believe that Lizzie is approaching old maid status. For Depression-era Kansas, that would be what? 30? Hepburn was nearly 50 when this was made and there’s nothing she can do to look 30 or even 40. It’s also required for the plot that Lizzie be considered “plain” by most people. Hepburn may well have lost a great deal of her fabled beauty by 1956, but she was in no way plain.

And so we’re left with a film that doesn’t work on any level for me. The plot doesn’t work, the characters don’t work, the people in the roles don’t work, and it’s so clearly and obviously filmed on a sound stage standing in for Kansas that it hurts a little. If there’s a bright spot, it’s Cameron Prud’Homme, who is at least likable and playing a likable character.

I’m sure there are folks who like it, but I’d say this is one to avoid.

Why to watch The Rainmaker (1956): Um…
Why not to watch: Overacting on all fronts and not that interesting of a story.

Posted by SJHoneywell at 7:03 PM