Film: Secret Beyond the Door
Format: Internet video on laptop

(Note: I'm trying something new here. I want to see what this looks like if I start inserting jumps into my reviews.) 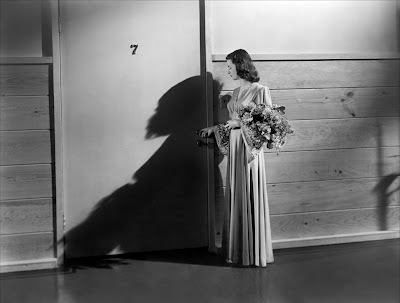 So let’s talk about Fritz Lang for a second. I like Lang’s work in general. He’s a director I have a great deal of respect for, and have since the first time I saw Metropolis as a teen. Yeah, I actually bought a copy of Metropolis when I was in high school. Even then, my tastes were wildly divergent from my own generation. Anyway, I’ve liked Lang for years, so I never shy away from watching his films. When the opportunity arose to see Secret Beyond the Door, I jumped at it. After all, any Lang is good Lang.

This film has many of the elements that make film noir what it is, and while this is how I classify this film, it only fits in the genre because it doesn’t fit well anywhere else. There is a sinister edge to this film, one that perfades it from almost the start to the very end. This, more than anything, gives Secret Beyond the Door that particular noir taste. There is a real sense of murder, of secrecy, and of palpable danger, yet the film doesn’t fully cross over into noir territory.

Celia Barrett (Joan Bennett) is a trust fund baby in New York, and lives a posh life thanks to the tender ministrations of her brother, Rick (Paul Cavanagh). However, Rick dies suddenly, leaving Celia on her own. Her friend Bob Dwight (James Seay) proposes to her, and Celia is quite tempted by this. After all, she knows Bob, and Bob is safe and non-threatening. It would be a comfortable existence, if one filled with a mutual affection and respect rather than passion and love. Before she decides, she travels to Mexico with her from Edith (Natalie Schafer).

It’s in Mexico that Celia meets Mark Lamphere (Michael Redgrave). While she learns only the most surface information about Mark, she falls hard for him and the two are married. It’s then that things start to change. Mark, we learn, is quite secretive, and frequently vanishes for days at a time, allegedly on business. He runs an architecture magazine that is hemorrhaging cash and he’d like to sell it, not wishing to be dependent on Celia. We also learn that Mark was married previously and is a widower. He has a son named David (Mark Dennis) from his previous marriage. All of this naturally comes as quite a shock to Celia. More shocking is when David tells her that he and his father do not get along because his father killed the first Mrs. Lamphere.

Also in the mix is Mark’s secretary, Miss Robey (Barbara O’Neil). On the verge of being fired years before, she saved young David from a fire, suffering terrible burns on the side of her face. Now, Mark heeps her employed more or less out of gratitude for saving his estranged son. Miss Robey has had plastic surgery, we learn, a fact that she has hidden from the Lampheres to ensure her own job security.

What really hits the high notes on the Disturb-o-meter, though, is Mark’s creepy hobby. As an architect, Mark has a particular fondness for rooms. In particular, he likes what he calls “felicitous rooms,” rooms that are perfectly designed for the events that happen in them. He specifically loves rooms in which murders have occurred, and he recreates them as accurately and as carefully as he can in his sweeping estate. There are seven “murder” rooms, and he’s willing to show anyone the first six, but the seventh, the seventh stays locked at all times. Of course, with a mystery like this to unravel, Celia is naturally curious. Coupled with mark’s odd behavior and sudden disappearances, there is a part of her that believes she may have walked unknowingly into a real-life Bluebeard story. So what is hidden behind that door?

So let’s talk about the fun stuff. First, I can’t tell you how entertaining it was for me personally to see the immediately recognizable Natalie Schafer in this role. If you aren’t sure who she is, well, she was Lovey Howell for years on “Gilligan’s Island.” She plays a character not unlike Lovey here, which causes me to wonder if the old girl was a bit typecast.

I said at the start that I’m a fan of Fritz Lang, and that holds true, but it must also be freely admitted that Secret Beyond the Door is one of his lesser lights. It doesn’t nearly approach the overall sweep and grandeur of his earlier films, and it’s burdened by some rather ridiculous Freudian notions. He works for a sense of menace and atmosphere and even achieves it at times, but there is more of a feeling of him forcing things too much here. M was more natural for all its darkness. This feels at least in part like an homage to Hitchcock, and specifically to Rebecca, all the way down to the jealous servant.

Still, it’s an interesting take on the Bluebeard tale. In the moments it works, like Celia’s entry into the locked room for the first time and her flight from the house, Lang manages to give us a real taste of the creeps, and even edges into something approaching terror. Sadly, he can’t maintain his position there, and while Secret Beyond the Door doesn’t exactly fall flat, it also doesn’t live up to its promise. Lang did better, but any Lang is still worth watching.

This is another tough to find film, although an all-regions DVD was planned for late last year. If you can’t find one, go here.

Why to watch Secret Beyond the Door: Because you should watch everything Fritz Lang ever did.
Why not to watch: Lang did better.