When you watch films off a planned list, you start to realize particular things. One things that you realize pretty quickly is that any list—even the AFI’s top 100—on some level reflects the tastes, opinions, and ideas of the list creator(s). Sometimes that’s easier to hide, and longer lists, since they include more, are less prone to personal bias. I say all of this because I’m starting to learn things about the editors of Fangoria Magazine and about their personal tastes in films beyond the basic “We like ‘em splattery!” 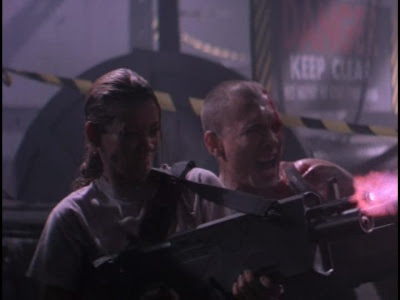 Death Machine is an odd choice for the Fangoria list. At least I found it an odd choice because I really don’t know what to make of it. It feels very much like a film created by a very talented and clever amateur. There are certainly some aspects of this film that really work and others that fall about as flat as a typical SyFy Original.

In a world with a large weapons mega-corporation with the unfortunate name of Chaank, something called Project Hardman is going poorly. Essentially, this project puts a person in a suit of powered armor, removes all of the personality components from the person, and creates a sort of super soldier. There’s public outcry, of course, and we’re introduced to the new CEO, the trendily named Hayden Cale (Ely Pouget, who looks like someone’s stereotype of mildly mannish female executive).

We find out a few important things. First, board member John Carpenter (yes, that name is intentional, and he’s played by veteran character actor William Hootkins) and board of directors president Scott Ridley (yep, intentional, and played by Richard Brake) let us know that the former boss was killed by something that essentially chewed him up and spat him out. The biggest corporate secret is what is going on in Vault 10. All anyone knows is that it’s controlled by Jack Dante (a sop to Joe Dante, and played by the great Brad Dourif), and that when the former boss started looking into Vault 10, he ended up as something’s chewtoy.

Jack Dante is nothing but creepy. He indicates to our obvious hero Hayden that he’s working on something dangerous and threatening. He’s also evidently incapable of being subtle and just about humps her in their first meeting. We also learn that Ridley isn’t as much of a jerk as he pretends to be—he’s just trying to survive. This doesn’t stop Hayden from swiping his access card so that she can get a look into Vault 10 herself (access requires both cards). Somehow Jack finds out about this, and we get a little glimpse of his new toy from vault 10 when it shreds poor Scott Ridley.

Oh, and there are some pothead terrorist types who want to get in and cause a lot of destruction to Chaank. Their names are (and I’m again not kidding here), Sam Raimi (John Sharian), Weyland (Andreas Wisniewski) and Yutani (Martin McDougall). Anyway, they show up just as things are about to get nasty between everyone involved. Of course, Jack figures out a way to play this to his advantage and get his mechanical critter released into the building. He calls it the Warbeast (but the film is called Death Machine, so I suppose you could call it either). He also tells us that it hunts essentially by pheromone; the more terrified you are, the easier it is for the Warbeast to track you down.

Death Machine has some pretty interesting ideas, but most of its best ideas come from other places. The Warbeast itself is little more than ED-209 from RoboCop with spinning metal talons instead of guns and a head like the creature from Alien. We’re told that the machine is designed as something to destroy morale on the battlefield, and while it does some pretty indestructible (of course), the damn thing isn’t armed beyond blades and teeth. It’s also fairly weak in terms of animation. Oh, the jaws champ up and down and the talons spin, but that’s pretty much it. Otherwise, it looks like an overgrown toy robot. I forgive it this thanks to the budget.

However, it is evidence of amateurish filmmaking. For instance, in one scene, four of the characters are in an elevator when the machine attacks. One “hand” bursts in through the bottom of the elevator and starts striking out. This scene is surprisingly good and, while not particularly scary, it’s pretty intense all the way through. The idea of the machine tracking by fear and programmed to destroy morale is also a fun one, since it gives the filmmaker an excuse to have it pick off characters one-by-one, thus increasing the fear in the rest of the characters. All of this gets spoiled when we see the full machine, though. It’s an erector set on wheels. It’s clumsy and sort of stupid, and while I wouldn’t like seeing it charge at me, it looks like it might have the same issues as our RoboCop friend ED-209. This is a creature better left seen in the shadows and in quick bursts; giving us the full Kahuna kills the scare and the magic.

Unfortunately, over-the-top acting from Brad Dourif and obvious homages to other films and directors aren’t enough to save Death Machine. It frequently looks like the low budget film it is, and at other times looks for all the world like an aforementioned SyFy Original. It also falls back on far too many easy clichés, particularly in the characterization of most of the cast. It’s evident that the film is part homage, part comedy, and part an attempt at a real scare or two. Sadly, it isn’t really enough of any of those things to pull off all three.

Why to watch Death Machine: Wormtongue!
Why not to watch: It’s not RoboCop, Aliens, or anything else it’s trying to reference.