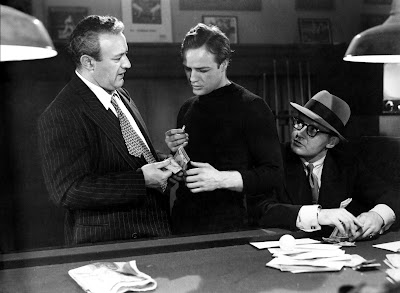 There are movies that sit in places of honor for a variety of reasons. When you look at particular lists like the AFI Top 100 and compare it with other, similar lists, you tend to see a lot of the same movies near the same spots. Citizen Kane, for instance, tends to hover pretty close to the top on these lists. Another film that tends to rank pretty high on most lists of this sort is On the Waterfront. This is a film that could have easily taken the big five had Eva Marie Saint been nominated for Best Actress instead of Best Supporting Actress.

Terry Malloy (Marlon Brando) is an ex-prizefighter who now works on the docks in Hoboken, New Jersey. Every day, he and a group of other men walk down to the docks and wait to be hired to help load and unload the ships. Terry tends to get work because his brother Charley (Rod Steiger) is the right-hand man of union boss Johnny Friendly (Lee J. Cobb). Johnny is insanely corrupt, taking a daily kickback from everyone who is hired as well as a kickback on every crate that is moved on the dock.

There are few who bother to stand up to Johnny Friendly and his crew, and as the film starts, we see the reason why. Dockworker Joey Doyle (Ben Wagner) is one who will stand up to the bosses, and he’s rewarded for this by being tossed off a roof. It’s Terry who calls Joey out originally, although he didn’t know what was going to happen. Joey’s death enrages his sister, Edie (Eva Marie Saint) and also arouses the conscience of the local priest, Father Barry (Karl Malden).

Terry becomes enamored of Edie and she of him, despite the warnings from her father (John F. Hamilton). Meanwhile, thanks to his connection to Charley, Terry is sent to investigate a meeting called by Father Barry to find out exactly what is going on down on the docks, but no one will speak. This doesn’t stop Johnny Friendly’s goons from attempting to break up the meeting, starting with throwing bricks through the church windows.

Why is all this happening? Because the dockworkers are completely under the thumb of the ruling class, and all of them play deaf and dumb because if they don’t, they won’t get any more work at best. Edie and Father Barry attempt to work on them, and Terry finds himself conflicted out of some sense of loyalty to Johnny and his family connection to Charley. Another dockworker, Kayo Dugan (Pat Henning), has his conscience pricked and goes to the police, and is soon the victim of a dockside accident, crushed under an intentionally mishandled load of whiskey. When Terry gets a subpoena, he’s forced into a decision.

The story is a classic one, but its real strength comes near the end when Charley and Terry are riding together in a car. Charley’s job is to keep Terry on the dark side’s version of the straight and narrow—if he stops hanging around with the troublemaker Edie Doyle and clams up about what he knows regarding Joey’s death, there’s a cushy, high-paying job in it for him. Terry, not known for his smarts, tells Charley that he is thinking over his options and Charley pulls a gun on him. And that’s when it happens—one of the great speeches ever filmed.

“It wasn’t him, Charley, it was you. Remember that night in the Garden you came down to my dressing room and you said, ‘Kid, this ain’t your night. We’re going for the price on Wilson.’ You remember that? ‘This ain’t your night!’ My night! I coulda taken Wilson apart! So what happens? He gets the title shot outdoors at the ballpark and what do I get? A one way ticket to Palookaville. You was my brother, Charley. You shoulda looked out for me a little bit. You shoulda taken care of me just a little bit so I wouldn’t have to take them dives for the short-end money…You don’t understand. I coulda had class. I coulda been a contender. I coulda been somebody, instead of a bum, which is what I am. Let’s face it. It was you, Charley.”

That, as much as him yelling “Hey, Stella!” in a ripped t-shirt made Brando, because it’s not just the speech but the way that speech was delivered. There’s fatalism in the delivery, a sense of dreams not just lost but crushed, and of realization of what his life has become.

On the Waterfront is rightfully near the top when the discussion turns to great American films, or great films of any nationality. While the ending may be a bit trite and Hollywood-y, it’s no less powerful because of it. This is a film that strikes at ideas of real life, of pain and loss and morality in the face of terrible odds.

And it’s also filled with tremendous performances. In addition to the eight Oscars it won, the film was nominated for an additional four, three of those Supporting Actor bids for Steiger, Malden, and Cobb. Everything in this film worked when it was made and still works now, but it’s a film that is owned by Brando from opening to close.

If you’ve never seen it, you should. If you have, you should watch it again.

Why to watch On the Waterfront: Because it’s one of the great films of American cinematic history.
Why not to watch: You’re a “black-and-white sucks” person.