I am Writing this Title 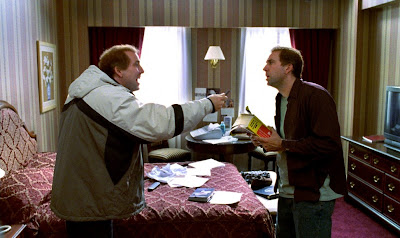 Charlie Kaufman is a weird cat. In many ways, Kaufman is the quintessential indie film geek made good, the guy who writes the strangest, craziest scripts based on the most bizarre ideas, and makes them work. His movies go places that no one else would think to go. He’s daring and he’s gutsy, and quite possibly a genius. I’ve liked a lot of Kaufman’s scripts, but I’ve liked his crazy ideas more. Adaptation is perhaps his craziest, and perhaps his best.

This is not an easy film to summarize, but I’ll do my best. Charlie Kaufman (Nicolas Cage) has been presented with the book “The Orchid Thief” to turn into a screenplay. The book concerns a man named John Laroche (Chris Cooper), who works with Seminole Indians in Florida to poach rare orchids. Because the orchids grow on formerly tribal lands, no law enforcement agency has been successful in prosecuting the Seminoles for poaching such plants. Laroche’s idea is to find a way to grow the orchids in his greenhouse and make them available, or at least that is the story he gives the book’s author, Susan Orlean (Meryl Streep). In this scenario, the orchids become available to the general public, poaching stops, and Laroche gets rich, a win-win-win scenario.

The problem for Kaufman is that he can’t find a real plot in the book. Much of the book concerns something called a “ghost orchid” that Orlean never gets to see. Since there really is no plot and since the book is essentially about flowers, Kaufman doesn’t have a place to begin his screenplay and has no destination for it. Enter his fictional twin brother, Donald Kaufman (also played by Cage), who wants to become a screenwriter as well. Donald takes a class from a man named McKee (Brian Cox) and begins working on his own script, a thriller of dubious quality but with lots of Hollywood-style pizzazz and action.

Donald is in many ways Charlie’s opposite. Where Charlie is introspective, nervous, self-conscious, painfully shy, and mildly agoraphobic, Donald is shallow, unassuming, oblivious, and mildly charming. He quickly gets a girlfriend, pens his script, and sells it for something close to seven figures, which only puts more pressure on Charlie, who is now well over his deadline for his own script, and no closer to starting.

Then, in the top level of the film, we discover that our top-level fictional Susan Orlean has become obsessed with Laroche. She also discovers that Laroche’s motives are not what he said they were—the ghost orchid can be used to make a particularly effective drug that causes the user to become enchanted and fascinated with the things they see. Hooked on this new, bizarre drug and running off for illicit trysts with Laroche becomes her new obsession. Meanwhile, Charlie takes the same screenwriting class from McKee and is told that writing a script in which nothing happens is ridiculous.

Then everything comes to a head. The events of the last half hour are either a staggering cop-out of astronomical proportions or the most subtle and sly dig and a further level of self-reference. I choose the latter in my own interpretation of the film. But I won’t spoil it here—this isn’t a film to read a spoiler on, even accidentally.

Adaptation also goes to show that Nicolas Cage, for all his acting in films like Drive Angry, Ghost Rider, The Wicker Man, and the National Treasure series, is capable of a nuanced and emotional performance. Cage has a great deal of talent, because this film wouldn’t work even slightly if he didn’t. The performances by Meryl Streep and Chris Cooper are perhaps less surprising, but no less great.

I understand why Nick (with a k), my podcasting partner, is enamored of this film. It’s smart, innovative, and an almost entirely new take on what a story is and what it can be. That said, I certainly understand why some folks wouldn’t like it.

Why to watch Adaptation: The most unusual story you’re likely to see for a very long time.
Why not to watch: The whole film is a snake eating its own tail.