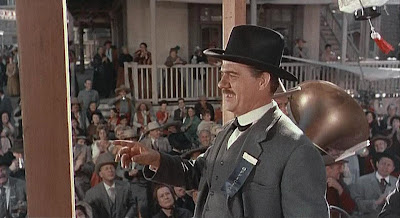 The revenge picture is about as old as movies themselves, and the revenge Western pretty much starts with the first ever Western. Even a film as rudimentary as The Great Train Robbery contains an element of revenge in the narrative—bad guys rob the bank and the good guys track them down and shoot them for their crime. As the genre grew and changed, so too did the nature of revenge in Westerns. One-Eyed Jacks, the one and only directorial effort from Marlon Brando, uses revenge as the driving force throughout. The nature of the revenge changes as the film continues, but don’t kid yourself; it’s revenge all the way through.

We start with a trio of (naturally) bank robbers. Rio (Brando), Dad Longworth (Karl Malden), and Doc (Hank Worden) manage to rob a bank in Mexico and get out of town, heading to a local whorehouse after the robbery. Rio goes off on his own, and when the posse rolls into town, they kill Doc. Rio and Dad ride off, pursued by the Rurales. Eventually, Dad and Rio are trapped on a hilltop with only one horse. They make a deal—one will ride off for fresh mounts while the other holds off the posse. Rio arranges for Dad to ride away, and he does, getting himself a fresh mount at a nearby farm. However, instead of going back for his friend, he rides away, allowing Rio to be captured and imprisoned for five years.

When Rio breaks his way out of jail, he rides north with his friend Chico Modesto (Larry Duran). They encounter another pair, Bob (Ben Johnson) and Harvey (Sam Gilman), who tell them that Dad Longworth is now the sheriff in Monterey. Coincidentally, there’s a bank in Monterey worth robbing. So, Rio is back in business, and his revenge is all set.

Once in Monterey, he renews his “friendship” with Longworth, and both men lie about the past. Dad tells Rio that he never found a replacement horse and was unable to come back—something that Rio knows is a lie. Rio tells Dad that he spent the five years riding and robbing rather than in prison. What Rio doesn’t expect (but you should) is that Dad is now married and has an adopted teenage daughter named Luisa (Pina Pellicer). It should come as no surprise that the two immediately fall for each other and fall hard. We also learn that there is a festival in town and everything, including the bank, will be closed up for a few days.

This gives us time to set up more revenge issues. It’s evident that Dad’s deputy Lon (Slim Pickens) has his heart set on Luisa but is too much of a lout to interest her. It also gives Rio a chance to run off for a quiet evening romp with Luisa, which we learn later results in a pregnancy. Dad certainly suspects something happened, and he acts on the assumption. When Rio shoots a man in self-defense, Dad takes the opportunity to publically whip Rio and smashes his hand with a rifle butt. Now, more than ever, Rio wants his revenge and he goes off to heal.

Of course, this sets up the confrontation that we wait the whole film for—the final showdown between Dad Longworth and Rio. Quite a bit more happens on the way there, including a couple of tasty shootouts, a bank robbery, and at least one significant act of betrayal. For all of that, it ends just about exactly as you expect it to. It is, after all, a Western.

One-Eyed Jacks is very much a traditional Western in the themes and the way it plays out What is interesting is the relationships between the characters. The key scene, at least in my opinion, is the one in which Dad and Rio meet up in Monterey. As the audience, we are aware that both men are lying. We saw Dad change his horse, consider the take from the bank robbery, and leave Rio to his fate. We know that Rio is aware of this as well, since the posse rode him past the farm where Dad changed horses. Only Dad is unaware of reality, and we see him lie convincingly for himself, but not for Rio. There’s a great deal going on in this scene behind the eyes of both actors, and it shows through.

The script is also top-notch. Again, the story is the standard Western revenge drama, but the way the characters talk about it is something new. There are tremendous moments of dialogue throughout, lines as good as any in a Western. We get the bully Lon, for instance, looking at Rio through the bars of a cell saying “You ain’t getting any older than tomorrow.” The name of the film comes from a comment made by Rio. He calls Dad Longworth a one-eyed jack, showing only one face to the people of Monterey. It’s alleged that Sam Peckinpah and Rod Serling worked on the script, and if that’s true, I’m not surprised. Additionally, Stanley Kubrick was the original director of the film before Brando took over.

My biggest complaint is the quality of the copy I watched. One-Eyed Jacks appears to be badly in need of restoration. The color is washed out throughout the film and edges have fuzzed over time, giving the print a distinctly aged appearance. The sound is similarly muddy. I attributed this initially to Brando’s typical diction, but that’s not the case—he actually speaks with something of a twang in this and doesn’t sound like Marlon Brando. Someone needs to get to work putting this back to the state it should be in, because it’s worth restoring if only for the quality of the script.

Why to watch One-Eyed Jacks: Brando’s only directorial effort.
Why not to watch: There aren’t a lot of surprises here.