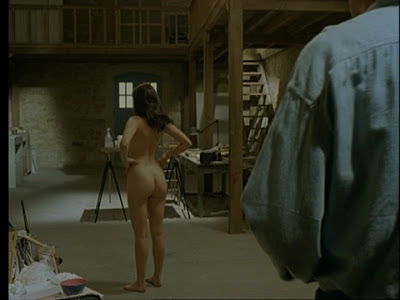 For a good six months or more, La Belle Noiseuse has been sitting at the top of my NetFlix queue. I put it there for a few reasons. First, it’s been the longest film I’ve had still to review. Second, NetFlix listed the wait time as “very long.” I figured I’d keep getting what was second or third in the queue until this one popped up. Well, it finally popped up.

I also understand exactly why the wait for this is so long. I’ve seen longer films, certainly, but few that are as surprisingly daunting as this one. It took me several days just to get the DVD into one of the players and even longer to start watching. The watching of the film took me several days as well, not specifically by design. Part of that is that I do have a life outside of this blog, but I’d be lying if I said that was the only reason. A part of that is that the middle chunk of this film is dull beyond all measure.

That’s a very un-reviewer-y thing to say, I realize, but I don’t care because it’s true. The film snobs among us will no doubt take issue with my characterization of this film as dull or the middle section as tedious, but I call them like I see them. La Belle Noiseuse can’t get past the fact that a good portion of this film is essentially watching a man’s hand make scratching motions on a piece of paper.

Yeah, you read that correctly.

Our story concerns an artist named Frenhofer (Michel Piccoli) who has given up painting. He lives out in the country with his wife Liz (Jane Birkin). Frenhofer and Liz are visited by a young artist named Nicolas (David Bursztein) and his girlfriend/fiancée Marianne (Emmanuelle Beart, best known as the sort-of love interest in Mission Impossible). We soon discover that Frenhofer quit painting in the middle of what was to be his masterpiece, a painting called “La Belle Noiseuse.” Liz was his model for it, and essentially, the painting became too much and too intense, and he gave up not only it, but painting altogether. Marianne, though, has suddenly sparked his desire to paint again. Nicolas agrees that she will pose for Frenhofer, and Frenhofer agrees that when the painting is done, it will go to Porbus (Gilles Arbona), an art dealer.

Marianne reluctantly agrees, and we’re about an hour in. The next roughly two-and-a-half hours consist of Frenhofer sketching Marianne. Since we’re talking about high art here, this means that Marianne is posing in the nude, so Emmanuelle Beart spends the bulk of the eternal second act in the buff, walking around Frenhofer’s studio. It’s a strange nudity, and it warrants its own paragraph.

When I say the nudity is strange, I don’t mean that Emmanuelle Beart is strange or misshapen. What I mean is that her nudity is complete—not even a necklace—and also strangely non-sexual. She’s simply nude. I’d be lying if I said this wasn’t at least partially pleasurable, and I wouldn’t be a heterosexual male and not say that Ms. Beart has a very shapely and attractive posterior. Hell, look at the picture at the top of the review. But, that said, her nudity is simply a fact, not a feature. It is, for the life of me, the pinnacle of “I’d do a nude scene if it was artistically valid.” It’s a blunt and frank sort of nudity, like a little kid walking around after a bath.

Anyway, during this stretch of time, a great deal of what we see is not Emmanuelle Beart’s naked hinder (as nice as that would be), but Frenhofer’s hand sketching. He sketches one pose, and we see the entire thing, from the first touch of medium on paper to the last. Then another. Then another. During this, there is no music and very often no conversation. It’s just the skritch skritch noise of whatever he’s using scraping against the paper until the sketch is completed. It’s not unlike an episode of The Joy of Painting with Bob Ross, only without the constant commentary. There are also no happy little trees and a lot more of Marianne’s crotch.

It’s not until the last hour or so of the film that Frenhofer even starts dallying with an actual brush—it’s all quick sketches up to that point. He and Marianne battle back and forth for some sort of control, and both of them lose themselves in the process. Liz worries that Frenhofer will have some sort of affair (perhaps a spiritual one) with Marianne, and Marianne considers that she no longer needs Nicolas around, and that he’s not worth much to her anyway. That, and skritch skrtich skritch encompasses our time until the painting is finished. Time for a spoiler.

Through all of this, I kept thinking that it might be worth it if we at least get a good look at the completed painting. And we don’t. Several people come to look at it. Marianne does, and freaks out, having seen some truth about herself on the canvas. Liz looks at it, marks the back of the frame, and walks away. And then, before we get to see it, Frenhofer takes the canvas, covers it, and walls it up behind bricks in his studio, then quickly paints a replacement. All that time, and we never get to see the painting except for one very quick glimpse of a bottom portion when it is being placed in the wall.

So, yeah. At the end, I feel like this was four hours of my time I don’t get back. Watching someone else draw isn’t that exciting. Watching it in almost complete silence without even a soundtrack to make it interesting is about as dull as you’d imagine. There’s no question that this is a beautifully made film and I won’t lie and pretend I didn’t like seeing an attractive woman nude on screen for a substantial amount of the running time. Still not worth it. Go ahead and read the spoiler if you’ve no plans of watching this. It’ll save you a lot of frustration in the end.

Posted by SJHoneywell at 7:28 PM