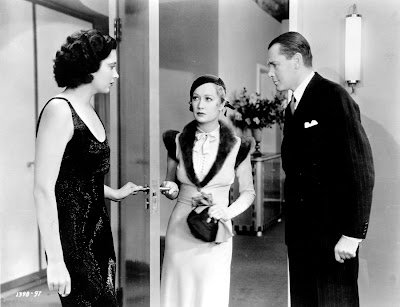 Once upon a time, there were old films made before the Hays Code. In these films, the bad guys could win and crime could pay. It wasn’t until after the code that we got such genres as film noir, where crime was a major part of the plot and didn’t pay no matter how much we liked the crooks in the film. Trouble in Paradise was made before the Hays Code happened, and it’s a film that couldn’t have been made the same way while the Code was in effect.

In this film, we meet up with Gaston Monescu (Herbert Marshall), an accomplished and dedicated thief. He is posing as a baron and romancing a woman whom he is hoping to rob. The woman, Lily (Miriam Hopkins) turns out to also be a crook. We have something like a meet cute after they’ve already met when it turns out that he has robbed the room of Francois Filiba (Edward Everett Horton). She, of course, has robbed him. But he’s stolen her brooch. But she’s stolen his watch. And he’s stolen her garter. And love blooms.

Some time later, Gaston manages to swipe the purse of Madame Mariette Colet (Kay Francis), a widow who owns and operates the most successful perfume company in France. He and Lily discover that the reward for the missing purse is far more than he could sell the purse for to a fence. And so he approaches Madame Colet and returns the purse for the reward. He also charms her into giving him a job as her personal secretary, which puts him in prime position to rob her blind.

The problem is that, like Filiba and a man known only as The Major (Charles Ruggles), Monescu has fallen for her hard. He’s torn between the thief he knows and loves and the widow who is far more charming than he would have expected. And, since he’s already ripped off one of her suitors, there’s the constant threat that he’ll be found out before he can get away, if he even wants to get away.

The love triangle here is an interesting one, but one that crops up every now and then. The idea that the thief falls for the victim is sort of a fun idea, and one that in this case is very fresh for when the film was made. And it is a real love triangle—there’s a great deal of sex going on in this film. When Lily and Gaston go through their little “look what I took from you” moment early in the film, it’s palpably sexual and culminates with Lily virtually attacking Gaston, leaving us to essentially imagine her dragging him off to bed (rather than the other way around). It is this rather overt sexuality that has, more than likely, kept this film off the radar of all but the most dedicated fan of the classics.

Trouble in Paradise is in many ways the start of the screwball comedy, but this is not a screwball in any way, shape, or form. Lubitsch was an extremely sophisticated director in what he could do and what he wanted to get from his films. There’s no slapstick here, and there shouldn’t be, because it would probably spoil the entire effect. Instead, we are graced with a level of elegance that isn’t seen that often in early film.

This is quite a find for a number of reasons. In the first place—and don’t sell this short—this is a true romantic comedy, and in many ways the first in the talkie era. Second, the sexuality is quite surprising for a film of this era. We tend to think that films from the 1930s are staid, naïve, and almost Puritanical. Not so. This film is downright racy in its own way. Third, it’s damn well acted all the way around. Miriam Hopkins is tremendous in her role, and Herbert Marshall is as suave as any actor I’ve ever seen. As usual, the great Edward Everett Horton is tremendous in a supporting role, and is a huge benefit to the final film.

Films like Trouble in Paradise are the reason I started watching all of these films. I’d have never picked this in 100 years of choosing films on my own, opting more than likely to watch something for the fifth or sixth time. And doing that, I’d have missed a real gem both in terms of its history and in terms of just how entertaining this film really is. If you don’t mind a film from the dawn of talkies, you’ll find a lot here to not just like, but really fall in love with.

Why to watch Trouble in Paradise: It was made before that nasty Hays Code.
Why not to watch: More rich people problems.