The World is Yours

At the start of every quarter in school, I ask my students to answer a few questions for me juts to help me learn their names a little better. One of those questions, naturally, is their favorite movie. Scarface gets named with relative frequency, and when it does, I ask the student in question if he (it’s invariably a guy) means the original or the remake. “The original!” he’ll say each time. “The one with Pacino!” And so I sadly shake my head and explain how that’s the remake, and that particular class never again gets in my grill about my movie knowledge.

The original, frequently called Scarface: Shame of a Nation will be familiar to those much more comfortable with the remake, because the remake really is a remake in a lot of ways. In this case, though, we are dealing not with a Cuban cocaine lord but a Prohibition-era Italian beer runner named Tony Camonte (Paul Muni). Camonte is the muscle for a booze runner named Big Louis, but Big Louis doesn’t make it past the first ten minutes of the film. It’s pretty evident that Camonte is the man behind the trigger, and that he is working at the behest of Johnny Lovo (Osgood Perkins).

With Big Louis out of the way, Lovo makes short work of taking over the Chicago’s South Side beer market, but Camonte has bigger plans. First, he wants to take over the North Side as well despite the fact that that part of town is run by a man named Gaffney (Boris Karloff). Second, and more important in terms of where this film is going, Camonte has his eyes on Poppy (Karen Morely), who is Lovo’s special friend.

On the home front, Camonte is virtually disowned by his mother. His sister, Cesca (Ann Dvorak), is caught with a man outside the house, which sends Camonte into a rage. No one touches his sister, after all, least of all some nameless punk. This will come into play later when we learn that Camonte’s first lieutenant Guino Rinaldo (George Raft) has eyes for Cesca, and she for him as well.

There aren’t a lot of surprises here if you’ve seen the much more famous remake. Of course, Guino and Cesca have a clandestine relationship, and of course Camonte finds out about this eventually with disastrous results. This leads the police onto him like nothing he had done previously, and soon we are neck deep in a battle against the police. While this film is pre-code, there was still a sense that bad guys should get what is coming to them, and so there are no surprises that Camonte does, in fact, get his comeuppance at the end of the film. If that’s a spoiler, I apologize, but not much because that shouldn’t be shocking to anyone.

So, since the story is so familiar because of the continued popularity of its greater clone, the important points of Scarface: Shame of a Nation are the specific details of the film. I for one am a sucker for appearances by Boris Karloff in just about anything. There was something about the man’s voice that makes me happy to see him on screen spitting out lines in anger. Sadly, Karloff isn’t in the film too much—he comes and goes, a victim of his own attempt to wipe out Camonte and his gang.

Paul Muni plays Camonte as someone just on the edge of sanity. An attempt on his life with machine guns doesn’t create any rage in the man; instead it engenders a fascination for the weapons, a desire to possess them, and an immediate course of retaliation against everyone who stands in his way. All of this is good, and what we expect from this sort of film. The issue is that Muni can’t decide which accent he wants to use. For a large portion of the film he speaks like what he claims to be—a transplant from New York. At other times, he appears to be a transplant from the Old Country, and speaks with a heavy Italian accent. It’s offputting and weird, and seems pretty amateurish.

This is not a film that has aged particularly well. It’s interesting for the fact that it’s a pre-code crime film, but there’s a reason that films like The Public Enemy and Little Caesar are better remembered; it’s because they are better films. I suppose it’s also noteworthy in that it was made somewhat under the nose of Capone, who it is in part based on. Evidently, Capone liked it so much he got his own copy. 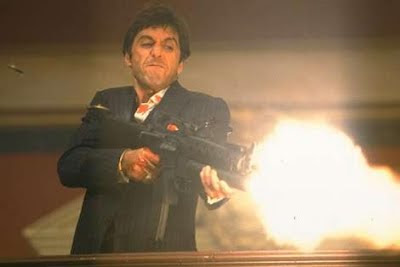 The remake, called simply Scarface, ranks with films like The Godfather in terms of crime and gang films. There is a special love for this film, I have found, in the rapper crowd and in many of their fans. As I mentioned above, I don’t have to wait too long at the beginning of a new quarter for someone to mention that Scarface is his favorite movie. Even now, watching it again, I have a hard time picturing that. I don’t get it. I mean, this is certainly a great film and one that all but the most squeamish should see. I just have a real problem figuring out how anyone sees Tony Montana as a hero.

If you’re one of the six people who haven’t seen this, I’ll give you the quick rundown, but you could simply reread the paragraphs above with a few changes. We start with Tony Montana, a refugee from Cuba. He calls himself a political prisoner, but it’s pretty evident that he did some time for other reasons. His friend Manny (Steven Bauer) arranges a job for the two of them—killing a former high-ranking communist now in exile and in their detention camp. They do the job and get their green cards, but they don’t get the life they wanted. Instead, they are stuck washing dishes in a taqueria.

It’s here that they meet Omar (F. Murray Abraham) who helped set up the hit that got them out. Tony pushes for a shot at the big time instead of unloading pot from ships, and Omar decides to give it to him, either to let him prove himself or to get rid of him. Tony takes his crew to meet with a group of Colombians bringing in cocaine. The whole thing is a set-up, though, and one of Tony’s associates gets hacked apart with a chainsaw. While Tony waits his turn, Manny shows up, and the two knock off the Colombian crew, getting both the cocaine and keeping the money. This Tony gives as a gift back to Frank Lopez (Robert Loggia), Omar’s boss, and this sets him up as a new player in the drug trade.

It can’t be that easy. Frank is attached to Elvira (Michelle Pfeiffer) , someone who Tony wants for himself. Tony sees Frank as being weak, and when Tony attempts to expand the drug business, he gets put in his place by Frank, who takes out a hit on him. Tony responds by eliminating Frank, Frank’s police contacts, and by taking Elvira for himself. This puts Tony Montana on top of the Miami drug syndicate, which essentially puts him on top of the cocaine syndicate for the United States.

Of course, it cant’s stay this way. Excess of drugs creates a rift between Tony and Elvira, between Tony and his connections, and eventually between Tony and Manny, who naturally pays for his interest in Tony’s sister Gina (Mary Elizabeth Mastrantonio). The last hour or so of the film chronicles Tony’s slide from the top of the drug food chain to little more than a wealthy junkie with more enemies than he can count. It very much follows the path of the original film, albeit with a lot more violence, bloodshed, and swearing.

The language is perhaps what most people remember from this film. It’s pretty extreme, and it’s frequent enough in the film that Scarface becomes comic when it is edited for television. Essentially, 30% or so of the dialogue needs to be removed for this film to play on television. There aren’t a lot of lines spoken by Pacino that don’t involve at least one dropped f-bomb. I can understand why some people would find this film…inappropriate.

It is, though, one of the great film performances from Pacino. Tony Montana is an unforgettable screen creation; there is simply nothing else like him anywhere in the world of film. He is extreme, violent, callous, and brutal, and completely unforgettable as a character. That may in fact be why so many people love the film and love him and why he’s become such an icon. Again, I don’t really see the hero in Tony Montana, but I suppose I understand a sort of attraction to him as an extreme personality.

Anyway, Scarface is a film that is often spoken about in the same breath as many of the great mob films of the last four decades, and I’d be hard pressed to come up with a reason it doesn’t belong there. If anything, it’s too much—too over the top, too extreme. But nothing exceeds like excess, as Elvira comments at one point. It’s also interesting that Tony Montana’s ultimate slide into hell comes because of his refusal to step over a certain boundary. We go through the whole film thinking there is nothing he won’t do only to learn near the end that Montana does have a line he won’t cross.

It was, incidentally, a nice touch to dedicate this to Hawks and Ben Hecht who directed and wrote the original respectively. That’s class.

Why to watch Scarface: Shame of a Nation: Crime before the Hays Code cleaned it up.
Why not to watch: The remake is better.

Why to watch Scarface: You have to ask me this, you cock-a-roach?
Why not to watch: The violence might be a turn off.