Part of the Title is Appropriate

Strap in, folks. This one is rough. I don’t expect them all to be winners, and when the film was listed in “The 50 Worst Films of All Time,” I expect even less. But this one is really, really rough. 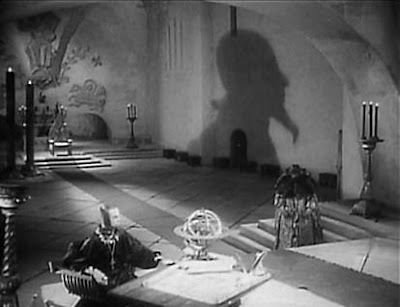 Ivan Groznyj 1 (Ivan the Terrible, Part 1, although this review will cover the secondpart as well) is, no surprises here, the story of Ivan the Terrible. It’s not the whole story, though, because this was originally thought of as a trilogy. Part 2 was suppressed, though, and Sergei Eisenstein died before he could get to the conclusion.

I’m going to make this quick, because there’s a lot to talk about here. Ivan (Nikolai Cherkasov) is named Tsar of all Russia. He’s also ferociously against the power of the Boyars, which makes him pretty unpopular with the Boyars. His aunt (Serafima Birman) isn’t a big fan of the new tsar, either. She’d like to put her son, Vladimir (Pavel Kadochnikov), on the throne instead. Of course, Vladimir is essentially retarded (I’m not being rude—I’m being serious here), which would naturally make him easy to control.

Then, suddenly, Ivan is getting married to Anastasia (Lyudmila Tselikovskaya). And then he’s greeted by enemies, who tell him to kill himself, and we’re at war. And he wins. And then suddenly he gets sick on the way back to Moscow and everyone is pretty sure he’s going to die. All the Boyars pledge allegiance to retarded Vladimir except for Ivan’s friend Kurbsky (Mkhail Nazvanov), who is the ex-lover of Anastasia. Of course Ivan recovers. Then his aunt poisons Anastasia and she dies, and the war goes against the Muscovites, and Kurbsky turns over his army to Poland. So Ivan abdicates in the hope that the people will beg him to come back. And that’s the end of Part 1.

So in the next part, the people beg Ivan to come back. He takes the Boyars land away, consolidates his power, and discovers who poisoned his wife. And he enacts his revenge. The end. Oh, and part of the end is in color. Go figure.

So let’s talk about the visual style here. Eisenstein decided to model Ivan on a bird. At times when Ivan is on top, he looks like a bird of prey, and when he is in positions of weakness, he looks like a bird about to be attacked. What this translates to, though, is that Ivan frequently stands with his nose pointing in the air. When he hears something, he turns his head quickly like he’s been startled. He (and everyone else) frequently rolls his eyes in the direction of someone talking and then moves his head toward the noise. Sometimes they don’t move their head at all; they just roll their eyes around. Their eyes are always opened as wide as possible, too. Everyone spends this film bug-eyed.

If that were not enough, nobody talks in this film. Everyone shouts instead. Entertainingly, Ivan sounds almost exactly like the aliens from Mars Attacks. It helps, of course, that he’s shouting in Russian. There were times while watching this that I had trouble concentrating on the subtitles because I was just watching Ivan swivel his eyes around, stick his beard out, and bark like a Martian.

This is another film that I’m not sure what to do with. I know Eisenstein is one of the great Russian directors, but we couldn’t get Alexander Nevsky?

Suffice to say that I’m not of the opinion that this one belongs cataloged with the greats of the film world. I ended up watching a good two-thirds of this as if it was being played for farce, and that made it mildly more entertaining, but no less ridiculous.

Why to watch Ivan Groznyj 1: It’s historical.
Why not to watch: It’s hysterical.